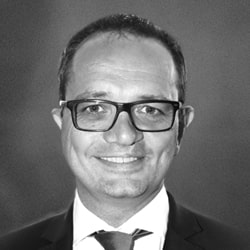 For 43-year-old Raphael Landthaler, the topic of football has always been high on the agenda. In his younger years, he was a founding member and a key figure at his hometown club, SKN St. Pölten. The ball continued to roll when he graduated from the University of Vienna, having written his thesis about the taxation of football players.

Back in 2001, Raphael Landthaler founded a start-up and began to gain international entrepreneurial experience. In 2007, he kicked off his career as a consultant and, in 2010, he founded your consulting team GmbH, which has since been supporting companies on matters related to restructuring, planning and controlling. In 2009, Landthaler obtained the certificate “Certified Partner Corporate Planning AG”, followed by the CTE (Certified Turnaround Expert) in 2010 and the CSE (Certified Supervisory Expert) in 2013.

Since 2010, Landthaler, who is the father of a young son, has been working for SK Rapid. Following the reorganisation of the financial management of the club, he was responsible for drawing up the business plan for the new Allianz Stadium. His various responsibilities as CFO include controlling, accounting, Bundesliga licensing, organisational development, digitization and the strategic development of the organisation. The southern Austria native has been the Director for Finances and Organisational Development at SK Rapid since 2015 and has served as an SK Rapid club representative to the ECA since 2017.