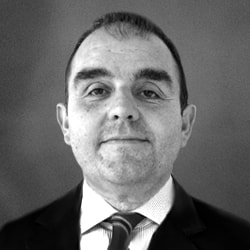 After graduating from Ealing College’s Catering School in 1990, Jonathan Parker began his hospitality career when he joined Town and County Catering as a Junior Events Manager. While working The Championships at Wimbledon, The British Open and many other prestigious events every summer in the UK, Jonathan also travelled the world working in various fine dining establishments – from a Bar Manager role in Aspen, Colorado to Assistant Maître d’ of an exclusive waterside restaurant in Darling Harbour, Sydney.

Returning to England to hang up his travelling boots in 1995, Jonathan took the Restaurant Manager role at the newly opened Lupo in Soho at the height of the West End’s food and beverage revival with similar openings at The Atlantic and Soho House.

Jonathan was then offered his dream job at Chelsea Football Club just as the stadium was undergoing a major redevelopment. As General Manager he oversaw the business as the stadium increased its total hospitality covers from 250 per match to 4,500. The Chelsea Village model included all of the stadium catering, 2 hotels and 3 day to day restaurants as well as a highly successful events business.

After the completion of the final West Stand in 2002, Jonathan joined the team at newly-formed catering company FMC Ltd. The company had won the iconic Wimbledon Championships contract and were in the process of rolling out a number of new UK stadium joint venture contracts to provide catering to Southampton FC, Swansea City FC, Leicester City, Hull City and Surrey Cricket Club. Innovative at the time, the contracts oversaw the Event Sales function as well as the entire Stadium Food and Beverage operation.

In 2008 following the purchase of FMC Ltd by Compass Group, Jonathan was appointed as Operations Director of their global contract at The All England Lawn Tennis Club.

In his first year he introduced the new Centre Court retail and fine dining facilities for The Championships, adding an additional 3,000 covers to the offering taking fine dining to 10,000 covers each day.

During his tenure Jonathan oversaw all food and beverage operations with the introduction of a new Club House, 2 new players’ facilities, various debenture hospitality restaurants and the new Media Centre in 2015.

Jonathan left the world of tennis to join Ascot Racecourse in 2016, after the business identified the F&B function as an integral element of a customer’s raceday experience, alongside sport, fashion and social occasion. Since joining the Ascot Board, Jonathan has seen the racecourse’s Sodexo catering partnership rebrand to become 1711 by Ascot. The 60 strong F&B team are boosted by nearly 4,000 event staff to serve more than 300,000 customers during the five days of Royal Ascot where they deliver more than 35,000 fine dining covers alone.