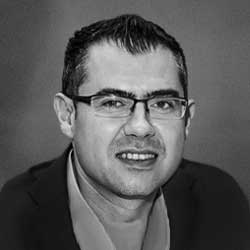 Having graduated from the Bucharest Faculty of Economic Studies, Adrian has an experience of over 20 years in the banking sector, having worked for the Romanian National Bank as well as for BRD Groupe Societe Generale. He has started working in the public sector in 2015 when he joined the NIC (National Investment Company) team, as Head of Investments. In the past 4 years he has coordinated the implementation of over 300 projects, in various fields such as sports, culture, health and justice. Each year up between 80 – 90 projects are being finalized.

NIC is the largest public developer in Romania and is subordinated to the Romanian Government. The most important investment accomplished by NIC in the last years was the “Ion Oblemenco” Stadium in Craiova, with a capacity of 30,000 seats. It ranked 4th in the “2017 Stadium of the Year”, organized by Stadium DB.

Presently the biggest challenge for NIC is the construction of three new stadiums in Bucharest (Steaua, Rapid and Arcul de Triumf) which will be used as training grounds for the teams which will play in the games organized by Romania, within the Euro 2020 Championship.

In his position as Investment Director Adrian coordinates the whole life-cycle of the projects: field studies, feasibility studies, public acquisition procedures, signing the contracts and finalizing the projects.

In the 4 years spent at NIC he oversaw the completion of over 300 projects from various fields of activity (stadiums, sports halls, swimming centers, ice-skating rinks, tribunals, hospitals, student housing, etc).