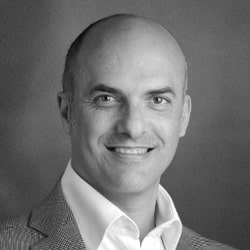 Javier Martínez is the founder of JMTZ Sports & Entertainment in Spain. A virtuoso in the field of fan experience management, he combines his experience in the world of marketing, professional sport, leisure, and entertainment.

In 2014, Club Atlético de Madrid (Spain) offered him the role of General Business Manager to lead the international expansion, and he succeeded in increasing the main sponsorship revenues by 400 percent in just 10 months. From 2016 to 2017, he led the design of the fan experience within the team’s new stadium: Wanda Metropolitano, one of the best three stadiums in Europe (hosting the 2019 UEFA Champions League final). Previously, he held, for almost 14 years, various positions of responsibility for The Walt Disney Co. in Europe, such as Chairman Walt Disney Co Iberia, Vice-President of Marketing and Sales of Walt Disney Parks & Resorts France and Benelux.

Born in Argentina, Martínez trained in Mechanical Engineering, and later graduated in Graphic Design at the University of Buenos Aires. He stands out for his extended international experience in many countries such as Spain, Portugal, India, Mexico, Belgium, Italy, France, China, and the United States.