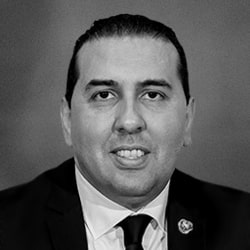 Mohammed Hamdi joined ADO Den Haag, Netherlands, in the role of CEO on September 1, 2019. ADO Den Haag is owned by the Chinese sports marketing company United Vansen which is based in Beijing. He has been working in sports environment and development for 10 years in several positions. He enjoys vast experience in helping to build new businesses, development of propositions, and also acts as a bridge builder between different entities. Hamdi has taken up challenging tasks at the Dutch association football club ADO Den Haag FC, and at two major sports marketing companies and has succeeded in achieving the desired objectives.

At Lagardere Sports & Media, Hamdi was responsible for UEFA EURO 2016, and as Director Football Netherlands he represented three football clubs looking after their marketing activities in the Netherlands. He also served a stint at the Infront Sports & Media and was responsible for a number of sporting events. Presently, he is also responsible for the commercial and marketing activities of Al-Jazira FC in Abu Dhabi and is engaged in the further development of the football market and segmentation of the club. Hamdi is licensed as management professional football C-level at the Dutch FA and has earned his Bachelor of Sports Business Management degree from BOSA.