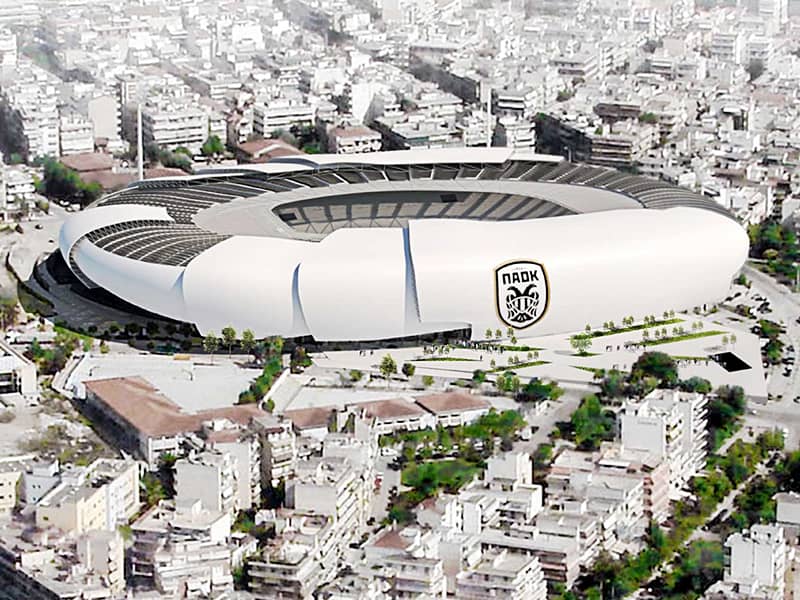 A new facility which can hold up to 33,500 spectators – PAOK Stadium – will come up in the place of Stádio Toumba. The latter will be torn down. To this end, A&S Architects from Athens (Greece) presented the design of the new PAOK Stadium. Construction work on the new arena is expected to start in 2022.

Stádio Toumba is a football stadium in Thessaloniki, Greece. It is the property of AC PAOK (a leading athletic club based in Thessaloniki, Greece). The official name of the stadium is simply PAOK Stadium, but through the years it has become synonymous with the borough it is built at, the borough of Toumba. It is the residence of one of the most popular clubs of Greece – PAOK FC.

The total cost of building the venue is estimated at approximately €140 million. The stadium is to be financed with public money from the European Union (EU) regional funds, as well as partly with bank loans and money of the Savvidis family – the owners of the club. Ivan Savvidis (a Greek-Russian businessman) himself has promised to cover major part of the expenses, and if that happens, it would be a rare case in Greek football.

The stadium is planned to be lodged near the Papafi underground station, which is scheduled to open in 2023.

A definite date has not been set for construction work to start on the new facility as there is a lot of formal official work left. The significant one is the presidential decree expected in April or May 2021, which would facilitate pulling down the present stadium and the commencement of work on the new facility in the summer of 2021. The planned relocation of PAOK FC to the new venue would take place in the 2023-24 seasons. However, this is a very optimistic picture being drawn, because it may so happen that the presidential decree will be issued later, and this will slow down the start of stadium construction work by several months.

PAOK FC is a Greek professional football club based in Thessaloniki, Macedonia (Greece). PAOK are one of the top domestic clubs, the most widely supported in Northern Greece and with the third largest fan base in the country.

As per the schedule, a Special Spatial Development Plan and the aforementioned President’s decree should be ready by the summer of 2021. Then the process of architectural studies will begin which will last about six months. Consequently, construction could start in 2022, with an implementation time of two to three years. This is the most realistic scenario for the new PAOK stadium at the moment.

Nothing is known at the moment as to how the talks with the owners of the Kaftanzogleio Stadium, where PAOK FC would play for at least two full seasons, will proceed. It is a question of PAOK and local rivals Iraklis striking a deal as regarding sharing the Kaftanzogleio Stadium. Though the arena is public property, the present tenants (Iraklis F.C.) and their derby rivals have to work out the ground share angle.

The 27,770-capacity Kaftanzoglio Stadium is a sports stadium in Thessaloniki, Greece. The stadium was built with money donated by the Kaftanzoglou Foundation. At the time of its opening on October 27th, 1960, the stadium was one of the highest quality stadiums in the Balkans. It is the home ground of Iraklis Thessaloniki F.C. since 1960.

Iraklis Football Club is a Greek amateur football club based in the City of Thessaloniki, Macedonia, Greece. The club will compete in 2020-21 in the fourth tier of Greek football pyramid. It plays its home matches at Kaftanzoglio Stadium.

The construction project of the new venue must be verified by the Metropolitan Planning Council, and then by the Central Council and a positive report should be sent out. It is possible that archaeologists may delay construction of the new facility in the event of unearthing historical value finds. If looked at from a pessimistic angle, the construction of the stadium would be finished in 5-6 years from today.

At the end of summer, public consultations regarding the construction of the new PAOK Stadium ended, which mainly centered around impact on the environment and the increase in road traffic. The Thessaloniki Metropolitan Committee greenlighted the study and the Ministry of Environment initially approved the assumptions of the document. This paves the way to the desk of the President of the country (Katerina Sakellaropoulou) and the issuance of a decree that would be a kind of green light for the imminent start of construction works.

The new facility is to be part of a larger revitalization plan for the Toumba district. It is also being planned to take a page out of Western European countries as per which the venue and its surroundings should attract fans, not only during the football matches, but also provide an opportunity to visit the district for several hours before the kick-off . For this, it will have to be a project boasting added attractions. This is to bring financial benefits to the stadium and the community on which it sits.

This can be done by the appropriate use of the space of the facility, where food outlets, eateries, conference rooms, recreational facilities, shopping center, etc., will be built.

Initially, the construction of a stadium with a capacity of 41,926 seats was considered, which was a symbolic figure and referred to the ‘Gate No. 4’, the famous ultras group of PAOK. 1926 is a reference to the year the club was founded. Later, the club’s management reduced their plans to 33,500 seats, which reflects the real needs of the club.

The colors of the stadium will primarily be PAOK colors, i.e., white and black. From a distance, the venue’s roof will resemble an eagle’s wings. It will be made possible thanks to the three-dimensional effect. Then the roof flows smoothly into the facade, which is surrounded by vertical circulation routes. The stadium will enjoy four ingress points and a different height of the stands. There will also be 1,000 parking spaces available. The venue is to have three levels of above ground floor space and one under the ground, largely intended for parking lots and technical rooms.

The architects have employed the latest parametric technology to create an exterior facade that has two layers. The structure has been designed to enable the use of photovoltaic panels due to which the stadium complex will be able to utilize solar energy to a large extent.

In addition, the arena will include cafes, restaurants, a museum, and maybe even cinemas and a shopping mall.

« Previous News: Key changes for Maradona Stadium in Argentina
» Next News: Avant-garde stadium to come up in Kabul