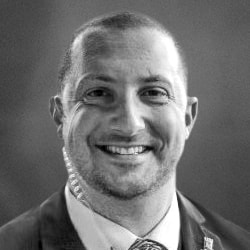 Anthony Mozzicato was hired as Director of Guest Experience in August 2016 and enters his 5th season with the Miami Dolphins and Hard Rock Stadium. He directly oversees all guest experience initiatives for the Dolphins, Hard Rock Stadium major events and the Miami Open tennis tournament. In addition, Anthony serves on the NFL Guest Services Committee and is an active member of IAVM.

Prior to joining the Miami Dolphins and Hard Rock Stadium, Anthony served over three years leading the guest services and ballpark experience department for the Kansas City Royals. He led a top ranked guest experience team in MLB and was part of the 2015 World Series Championship team.

Prior to the Royals, Anthony managed Sporting Park, a new 18,500 seat professional soccer venue for MLS Sporting Kansas City, as the Director of Fan Experience and Events Operations Manager directly overseeing all guest services staff and event operations for the stadium over a two year term.

Anthony graduated in 2007 from the University of South Florida (Tampa, Florida) with a B.S. in Business Administration. While a student at USF, he assisted the athletics department and the Tampa Bay Sports Commission from 2004 to 2007 as an intern. Anthony also served as a Spring Training Bat Boy and Clubhouse Attendant for the Texas Rangers in 2002 when the team was located in Port Charlotte, Florida.