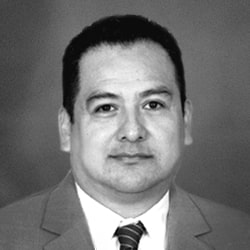 Raul Gutierrez currently serves as the Executive Director of Arena Operations T-Mobile Arena, the newest hot spot on the Las Vegas Strip. In his role, he is responsible for all front of house operations including Guest Services, Security, Safety & Emergency Services, Parking & Transit, Box Office, IT, Facility Presentation, Production and Venue Operations. The Arena, which has been named Venue of the Year by Pollstar, Billboard and numerous industry and trade outlets, is the fourth venue Gutierrez has opened.

Prior to leading the team at T-Mobile Arena, Gutierrez served as the Assistant General Manager of Barclays Center in Brooklyn, New York, directly overseeing operations for Security, Traffic, Guest Services, Box Office and Events departments along with managing city and transportation agency relationships. He began his tenure at Barclays as the Vice President of Events and Security as part of the venue’s opening staff in 2012. Within the first year of operation, he was promoted to Assistant General Manager, expanding his area of responsibility and leadership for the company. While in his role, he has managed a variety of prominent events at one of the top venue’s in the country, including the MTV VMAs, the NBA Draft and 2015 All- Star Weekend, the inaugural season of the Brooklyn Nets along with major concerts from Paul McCartney, Beyonce, Jay-Z, Pearl Jam and more.

Prior to Barclays Center, Gutierrez was the Senior Manager of Guest Services and Security for BBVA Compass Stadium in Houston, Texas, a soccer-specific venue and AEG Facility which opened in May 2012. In his role at BBVA Compass Stadium, Gutierrez managed Event Security and Guest Services operations and staff with the primary goal of ensuring an outstanding customer experience across all stadium events. The venue is home to MLS’ Houston Dynamo, the NWSL Houston Dash and Texas Southern University college football. Other notable events include CONCACAF, Gold Cup, a variety of international soccer events, USA Rugby events and a variety of concerts
and private events.

A native of Los Angeles, he began his career with the L.A. Dodgers and spent more than 20 years working in a variety of roles, including Assistant Manager of Security and Guest Services. In addition, Gutierrez opened Nokia Theater (now Microsoft Theater) in Los Angeles and worked at Staples Center as well as Home Depot Center (now StubHub Center) in Carson, California. Through his professional tenure at these venues, he worked on a variety of major sports and entertainment events including the World Series, MLS Cup, X-Games, NBA, NHL, USTA, USSF, Boxing, CONCACAF, Gold Cup, Crossfit Games, Motorcross, Monster Trucks, a variety of concert events and festivals, and the Republican Presidential Rally.