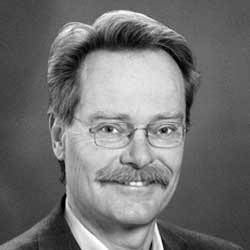 David M. Campbell is one of the founding principals of Geiger Engineers and has managed the firm as its Chief Executive Officer since it was established in 1988. In his 37 years of engineering practice, he has had a significant role in over 30 large spectator sports facilities. He has served as Principal in Charge for numerous international projects, including the New Armstrong Stadium at the Billie Jean King National Tennis Center in New York, NY, the 2002 World Cup Stadium Roof Canopy in Seoul, Korea, and the retractable roof for the B.C. Place Stadium Revitalization in Vancouver, British Columbia. He has authored numerous technical papers on long-span, tensile and sports structures.

In addition to his expertise in tension membrane and long-span structures, David has provided construction engineering to contractors for a number of major sports buildings, including US Bank Stadium in Minneapolis, MN, New Milwaukee Bucks Arena, Milwaukee, WI, and Sprint Center in Kansas City, MO. He has extensive experience in entertainment rigging and has consulted to numerous productions including Opening Ceremonies of the Olympic Games, the Pan Am Games, halftime shows for the NFL Superbowl, MTV Video Awards, the Academy Awards, and the Grammys.