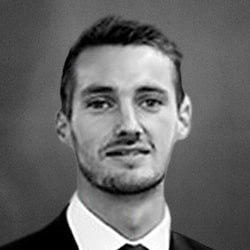 William Swann heads Corporate Development and Infrastructure Projects for Major League Cricket (MLC), where he joined as the first employee in 2019. During that time he has led MLC’s first stadium project in Grand Prairie, Texas, from ground lease through to construction (due to be completed in Spring 2023), as well as pre-development agreements in Santa Clara and Irvine, CA, and smaller auxiliary venue developments in North Carolina. William also leads MLC’s business strategy and commercial partnerships across venues and the league.

Major League Cricket is bringing the world’s second most popular sport to the US with a top-tier professional league that will launch in 2023; backed by a number of prominent investors from both the US and abroad, including Microsoft CEO, Satya Nadella, and leading Indian Premier League franchise, the Kolkata Knight Riders.

William is originally from Melbourne, Australia, where he worked across a range of industries before he moved to the US in 2019 while working for global management consulting firm Bain & Company; prior to that he has experience in construction management and product innovation at several leading Australian companies. William holds a Bachelor in Civil Engineering and Masters in Finance from the University of Melbourne.