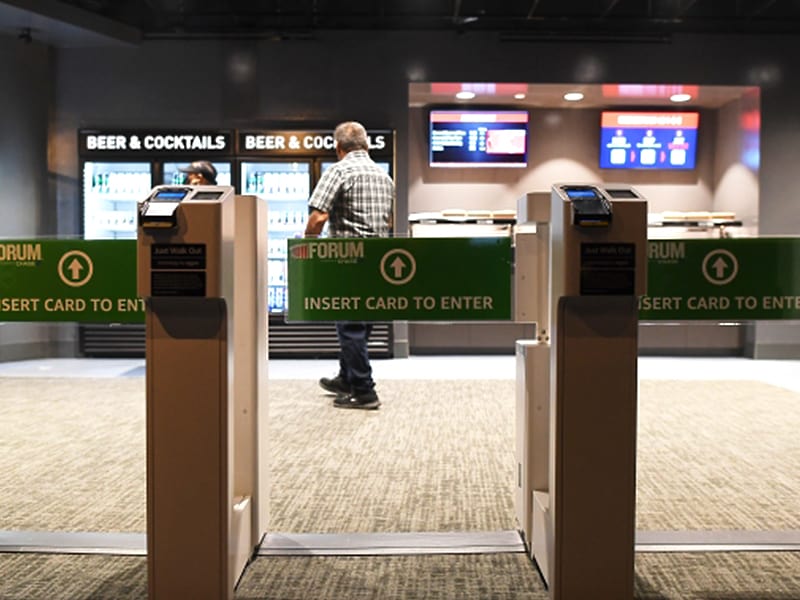 A concertgoer’s nightmare: Oscillating between holding your snack and beer, while the opening notes of ‘Hotel California’ drifts in from the auditorium, stuck smelling popcorn instead of the imagined scent of colitas. Anyone seeing the Eagles’ closing night at the Forum in Inglewood (US) recently, it doesn’t have to be that way – at least anybody who’s hep to a new high-tech concession stand getting its official launch, and able to get to the floor-level spot where the singular installation is located.

The ‘Variety’ stated that the new store is being powered digitally by Amazon’s Just Walk Out technology, which has 66 cameras embedded in the ceiling of the concessions space, tracking what you do and don’t leave with. A credit card is required for entry into the store, ensuring that you do get charged upon exiting, even if it’s difficult initially to get over the sensation of having shoplifted.

Amazon’s Just Walk Out technology lets shoppers enter a store, grab what they want and get going.

The 17,505-capacity Forum is a multipurpose indoor arena in Inglewood, California, United States, adjacent to Los Angeles. Located between West Manchester Boulevard, across Pincay Drive and Kareem Court, it is North of the 70,000-capacity scintillating SoFi Stadium and the Hollywood Park Casino, about three miles (4.8 km) East of Los Angeles International Airport (LAX).

Laughs Gillian Zucker, President, Business Operations for the National Basketball Association (NBA) team Los Angeles Clippers, which took over ownership of the Forum last year, “Exactly. ‘Are you sure I didn’t just steal this?’ seems to be the most commonly asked question.”

The ‘Variety’ further stated that after this digital disruption, probably the second-most-asked question: ‘Is there a way to make all the stands like this?’ The answer to that is no, at least not in the Forum’s immediate future, as it is financially not prudent enough to afford a high-tech set-up like this. But the idea is to have these “friction-free” concessions as the standard at the new home of the Clippers, the Intuit Dome, by the time it opens about a block away in 2024.

The Intuit Dome is an under-construction 18,000-seat arena to be located in Inglewood, California (US) for the Los Angeles Clippers of the National Basketball Association (NBA).

Added Zucker, “The retrofitting of the stores is not inexpensive. And that’s really the benefit of starting from scratch that you can plan for it from the beginning. The technology that’s utilized requires a great deal of back-end capital investment. So, we’re excited about the idea of being able to install from scratch (at the Intuit Dome). Having said that, I wouldn’t completely eliminate the possibility of there being more stands like this at the Forum.”

She says they “Want you essentially to have an experience just like in your living room at home. If you want something, you walk up to a fridge, grab whatever you want and head back to your seat.” (If, of course, you had to swipe a credit card to get into your kitchen.)

Zucker informed that the technology is already in use at Amazon Go and select Amazon Fresh stores across the country. And it’s already being successfully used for concessions in arenas like Chicago and Boston, though this is the first time it is being introduced on the West coast.

Anyone who’s ever taken a drink out of a hotel refrigerator in recent years and feared whether they’d be charged even after putting it back may feel those fears being compounded if they enter an Amazon-powered concession stand and decide to put a mini-pizza or beer back. Zucker admits she had those same compunctions the first time she tried shopping in a clerkless shop, as she deliberately tried to confuse the system.

Zucker continued, “I recall walking into the Amazon Just Walk Out store and pulling things off the shelf and then putting them away, even putting them back on shelves that they didn’t belong on. I took a free sample of something to see if it would charge me. Of course, I walked out of the store and it was 100 percent right. As you know, in many cases, technology can be more reliable and eliminate human error.”

Asked if, in this age of privacy concerns, customers might have any fear of being surveilled, even to catch the opening of a rock show, Zucker says of the 66 cameras: “Don’t think of them as a traditional camera, because they’re not actually taking your photograph. This is actually a tracking mechanism, so it follows you around kind of a bit more like a beacon technology.”

Zucker stated that the announcement of the new stand “Was incredibly well received. And actually we saw triple the amount of volume as we’ve seen in the past through the same location even without any initial publicity to direct attendees there. People who were leaving exclaimed, ‘Wow, you can get a Pink’s hot dog in less than two minutes’. And that includes the entire time of walking into the store, perusing, grabbing whatever you want, and leaving.”

The Clippers’ affiliation with Amazon predates the concessions shift, and even preceded the days before Steve Ballmer bought the Forum from Madison Square Garden Entertainment for $400 million in 2020. (That deal allowed the adjacent construction of Intuit Dome to proceed, while allowing the Forum to live on as a concert venue.)

Informed Zucker, “More than five years ago, we started looking into the tracking technology that’s utilized in order to track stats of the players during the game, and created a broadcast experience through computer vision with that technology in conjunction with Amazon Web Services. We’ve had a relationship with them for many years, so this was a logical next step as we were looking for ways to help address the pain points of people standing in line at concert events or sporting events.”

Is it better than normal concessions in every way? Added Zucker, “We’d like to think that these will become ‘normal’ concessions. I think if there is something that will slow the adoption of this, it’s simply the capital cost to install them. But I certainly can see a day in the not too distant future when this is considered the widely adopted and normal technology in order to have a transaction. This is not just for concessions. We think it has really broad applications. If you think about any time that you need to stop and have a transaction, if there’s a way to automate that and make it faster for fans, then you can eliminate a lot of the pain points that people experience when they come to large events.”

Under the new system, in other words, Eagles fans will be able to check out with a Diet Pepsi any time they like, and better yet, they might even be able to leave.