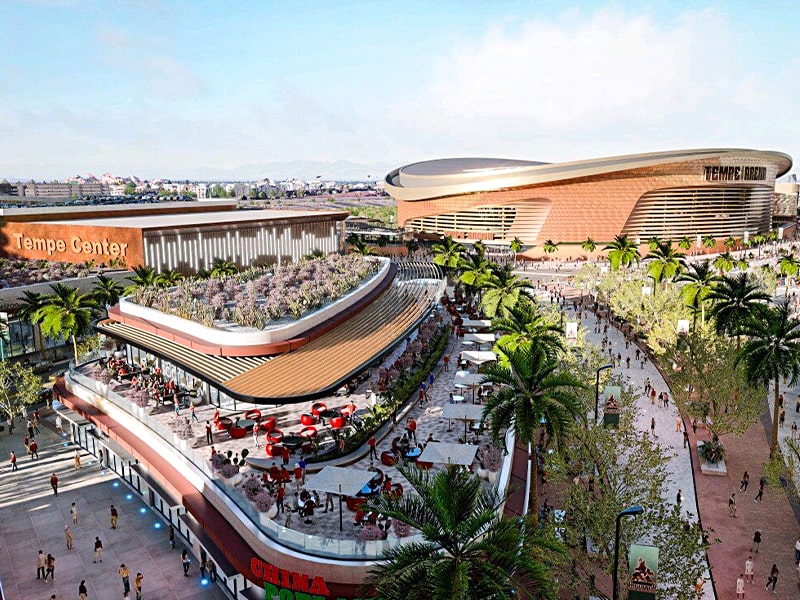 The Tempe City Council (Arizona, US) voted 5-2 on June 2nd to enter negotiations with the Arizona Coyotes and its developer on plans for the National Hockey League (NHL) team’s new arena and entertainment district.

The ‘Arizona Sports’ stated that a ‘yes’ vote does not cement the Coyotes’ arena at the location on Priest Drive and Rio Salado Parkway. It does, however, advance plans between the City and the team to move forward with planning a hockey arena, as well as hotels, offices, retail, and residential spaces.

A “no” vote would have meant Tempe declined the plans from the Coyotes and Bluebird Development, LLC. The City Council “could choose after this to issue a new call for proposals at this location”, according to Tempe’s Press release.

The 18,300-capacity Gila River Arena is a sports and entertainment arena at the Westgate Entertainment District in Glendale, Arizona (US) and till not so long back served as the home venue of the Arizona Coyotes. Located about 12.5 miles Northwest of downtown Phoenix, the arena was built East of Arizona Loop 101 and on the North side of West Maryland Avenue at a construction cost of $220 million.

The proposal for the $1.7 billion development in Tempe calls for private funding along with a portion of funding coming from City tax revenues to pay for $200 million on top of that.

The Coyotes said in a release, “We are extremely pleased that the Tempe City Council has voted to proceed with negotiations on development of the Tempe Entertainment District. Having heard all the facts, they have recognized the incredible opportunity that this project presents – not only for the Coyotes but also for the City of Tempe. We look forward to taking the next steps to turn this exciting vision into a reality.”

Now that the City Council voted to move into a formal negotiation phase, it could take several months before the plans are approved. Public input via open meetings would be an important part of that process.

Added the head honcho, “… This is now an opportunity for us to really get out in the community and really hear what their interests are and to really complement the vision we have put in our proposal to meet the best uses and best vision for this project that Tempe deserves.”

The ‘Arizona Sports’ further stated that Tempe (City in Arizona) Mayor Corey Woods said before the vote on June 2nd that he hoped for the City Council to move forward with negotiations with the Coyotes and their developer. He wanted to have more time to hear from the public on whether they were for or against the proposal in the name of the conversation continuing.

Council Member Doreen Garlid, who voted against the plan, said she had concerns that Tempe rushed the request for proposal (RFP) process that set in motion the Coyotes’ initial plans for their entertainment district.

She said that the land up for development is one of the last large parcels the City could develop because it is landlocked and wants more public input before a decision is made.

The Sky Harbor International Airport issued a statement after the vote to enter a negotiation phase was made – “As neighboring Cities, Phoenix and Tempe have a longstanding tradition of working together for the benefit of the entire community. We understand Tempe’s desire to develop this land East of the Airport, and Phoenix Sky Harbor is not in opposition to the Tempe Entertainment District development as a whole. Our concern has been and remains with the proposed residential high rise which would violate the terms of an interGovernmental agreement (IGA from 1994) between Phoenix and Tempe. If the residential building is not removed from the project, it jeopardizes the entire agreement. For nearly three decades this agreement has helped reduce the harmful effects of noise for Tempe residents. We are optimistic we can come to a mutually beneficial solution which will ensure compatible land use in the high-noise areas directly under Sky Harbor’s flight paths.”

The Coyotes said they will invest $1.7 billion in private funds to turn land that was previously a landfill into an arena, a practice facility that will have ice available to the public, as well as retail, hospitality, office, and about 1,500 residential units. It will cost an estimated $200 million to clean up the site and prepare the infrastructure before construction begins.

The proposal includes a plan to find the necessary money “without raising taxes or using current City revenues by issuing public infrastructure bonds sold to private investors”, according to the project proposal’s website.

The NHL club owned by Alex Meruelo projects the entertainment district could create close to 7,000 jobs in Tempe and generate $180 million for the City alone over 30 years, among other benefits.

Gutierrez said in a presentation to the City Council on June 2nd that he was “confident” there was support from Tempe residents for the entertainment district after the team conducted a survey about a potential move to the City.

The City of Tempe had been analyzing the Coyotes’ proposed plans submitted on September 2nd, 2021.

In April, the City Council asked its Tempe staffers to “seek clarifications from the project proposer on a number of matters”.

Those included concerns from the Federal Aviation Administration (FAA) and the Phoenix Sky Harbor International Airport over building heights, construction crane heights and noise caused by air traffic for future residents. The FAA, in a letter sent to the Tempe City Manager a day before the City Council vote, expressed concern over the noise level for residents regardless of the construction enhancements to deaden sound inside the proposed residential units for the project.

Woods made it clear that the “yes” vote did not confirm that residential housing would be included in the entertainment district.

The Coyotes ended their 19-year run at Glendale’s Gila River Arena with their 2021-2022 seasons and will move into a temporary home at the Arizona State University’s (ASU) new multipurpose arena for the next few years.

All of the Coyotes’ home games from 2022-2023 through 2024-2025 will take place in the ASU-owned arena, with an additional option for 2025-2026, while the NHL club awaits the approval and construction of the proposed permanent home along the South side of Rio Salado Parkway in Tempe.

The 5,000-seat arena is scheduled to be completed early this Fall.