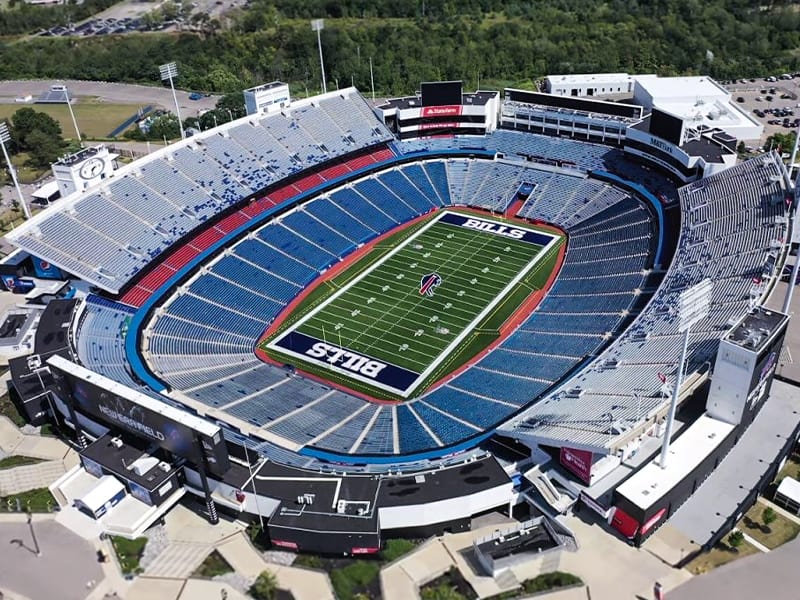 More than 6,000 fans will be welcomed back to the Bills Stadium (US) fold on January 9th, 2021, as the Buffalo Bills National Football League (NFL) American football team plays its first playoff game in 25 years.

The Buffalo Bills are a professional American football team based in the Buffalo-Niagara Falls metropolitan area. They compete in the National Football League (NFL) as a member club of the league’s American Football Conference East division. The team plays its home games at Bills Stadium in Orchard Park, New York.

The Buffalo Bills have been allowed to play host to 6,772 fans for the game against the Indianapolis Colts, with around 6,200 of these to be general-admission tickets. Tickets were made available to season ticket members on December 31st and got sold like hot cakes. The remaining 572 entries will go towards NFL commitments.

The Indianapolis Colts are an American football team based in Indianapolis. The Colts compete in the NFL as a member club of the league’s American Football Conference South division. Since the 2008 season, the Colts have played their games in Lucas Oil Stadium which sits at Indiana, US.

The Bills have qualified for the end-of-season playoffs for the first time since 1996. So far this season, all of the team’s home games have been played without fans but spectators will be permitted on Saturday.

Bills Stadium, earlier known as New Era Field, can hold 71,000 fans and will be operating at around 9.5 percent capacity for Saturday’s game against the Colts. All fans will be required to produce a negative COVID-19 test result through the NFL’s testing partner, Bioreference Laboratories, to be able to attend the game.

Tickets have been sold in two- and four-ticket pods only, with only one pod available per season ticket member account. Fans will be required to pay for their testing as part of their ticket purchase to cover all associated costs, with Bioreference Laboratories providing tests at a reduced cost of $63 (£46/€51).

The Bills will also introduce staggered entry times, cashless transactions and wearing of face covers will be made compulsory at the game to limit the potential spread of COVID-19 which is still causing scores of deaths in the United States.

Said Bills Co-Owner Kim Pegula, “We know that the fans have been waiting 25 years to be able to attend a playoff game and we are so excited to be able to allow the limited amount of fans that we can. I want to just say that we are so hopeful that there will be many more games that all fans can attend. For us to do that … we all need to be safe starting today even beyond the game.”

“… We want to just encourage everyone out there, all our fans that we just need to do our part. Wear your mask, being compliant to CDC guidelines, social distancing. We all know what needs to be done, we just all need to do our part to get it done so that we can have everyone back in our stadium soon,” Pegula concluded with a note of optimism.