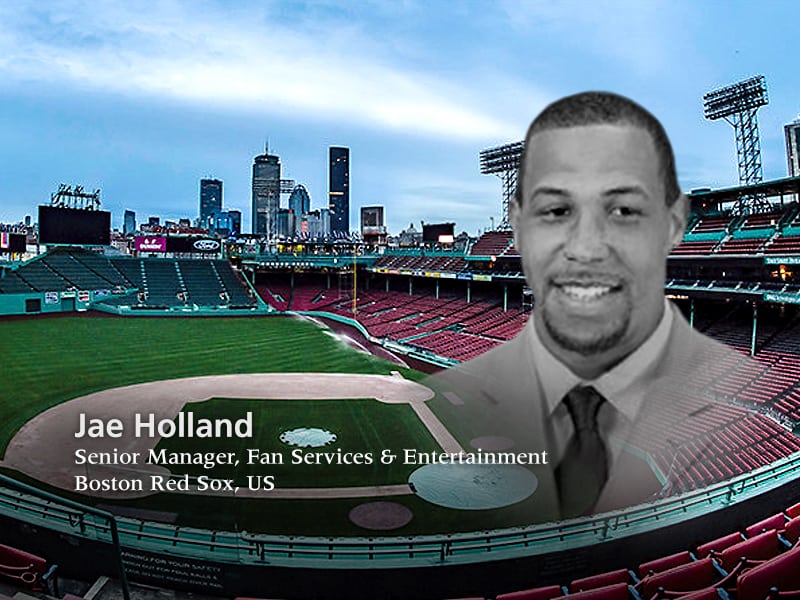 The 37,731-capacity Fenway Park is a baseball park located in Boston, Massachusetts, near Kenmore Square. Since 1912, it has been the home for the Boston Red Sox, the City’s American League baseball team, and since 1953, its only Major League Baseball (MLB) franchise.

For Boston Red Sox, the ‘fan is the king’ and fan experience is what matters most for them for they well know the fact that if a fan has a negative experience with the stadium, you have potentially lost them forever. In an exclusive chat with ‘Coliseum’, Jae Holland, Senior Manager, Fan Services and Entertainment, Boston Red Sox, says how they almost try to roll out the red carpet for their fans and provide them an exquisite experience while inside Fenway Park.

Stated Jae Holland, “The fan experience means everything for us. We want to retain fans. We want to track new fans. But we indulge in this exercise without alienating our pre-existing fans.”

Boston Red Sox is an organization committed to:

As Holland pointed out, “We have tried a lot of what we do around here on our fundamental organizational commitments. We are just committed to fielding a team that is competitive and wins. And this is a commitment that we have made to our fans under the able guidance of Boston Red Sox President Sam Kennedy.”

The Boston Red Sox wants to impact the lives of every New Englanders (Boston falling in the New England region of United States) irrespective of the fact that whether they are Red Sox supporters or not. Holland stated that the MLB team believed in giving back to its communities and receive feedback on how they are doing – “We literally listen to our fans and our supporters and we take their phone calls, respond to letters and emails and we always try to keep enhancing the ballpark experience.”

Baseball is always evolving – new players, new faces. Holland further pointed out, “Look at the National Football League (NFL), the National Basketball Association (NBA), they are always capitalizing and generating on how to be able to resonate with the younger audience. That’s what we want to do. In one of our Student’s Night programs, we engage college students and allow them for certain games to come in and purchase tickets for nine dollars. We believe in making tickets affordable for our fan base so that they can come in and experience Fenway Park. The Fenway Park should grow on fans instantly.”

Boston Red Sox wants everyone to feel involved in Fenway Park whether they are here cheering, whether they are vending peanuts, or whether they are doing customer service – “We all are part of the Fenway experience and more importantly, those who are working we have created very pivotal Fenway experience although we can’t control the outcome on the field but we do control everything else that happens within the ballpark in a way to provide great A-plus experience. Fans may be down that we did not win, however, they are going to remember the great experience that they had inside the ballpark. This is something that we pride ourselves on – we ensure that we are providing great service as well as providing an inviting environment for all fans.”

The Fan experience: ‘The FEN-WAY’

The Boston Red Sox trains its staff and what is so amazing about ‘The FEN-WAY’ is it also applies for its fans. Whatever they ask of their fellow employees, they make sure that it is something that they can ask for their fans.

On October 21st, 2004, the Boston Red Sox defeated its peer team the New York Yankees 10-3, winning the American League Championship Series with a stirring comeback and advancing to their first World Series since 1986. The Sox are the first team ever to win a best-of-seven series after losing the first three games. The team has won nine World Series championships, tied for the third-most of any MLB team, and they have played in 13. Their most recent World Series appearance and win was in 2018.

The Red Sox Nation is a term used for fans of the Boston Red Sox.

Go above and beyond

Holland stated that the Boston Red Sox believed in doing their best possible to fulfill fans’ wishes and narrated an interesting incident of a fan couple that lives in Alabama and they were sending out various letters inviting the Boston Red Sox to their wedding and never did they expect in their wildest dreams that the team will respond. However, the Red Sox did respond – “So, initially what we were able to do is send them letters and making them aware that it was so grateful that they wanted us to be a part of their special day though that we couldn’t be there in person, we wanted to let them know that we were in spirit with them. So, we issued a handwritten letter and sent out some goodies to them and the fan couple broke down crying and it was an amazing sight to see – just to see someone so overwhelmed with joy from something that probably it took us less than 15 minutes to do. Even though you are in Alabama which by flight is probably close to three hours, you are still part of us and we still care about you.”

Holland added, “Fans have a great experience when they are inside the ballpark. We pride ourselves on that however, we do not limit the fan experience to just being within the ballpark. If you are a supporter, if you are a fan, if you are part of this Red Sox Nation, you are a part of the fan experience. So, every piece of mail that comes in, we make sure we respond to it. We respond with a personalized letter, multitude of times with a handwritten letter and we send additional goodies with them whether it is actual ‘Dirt’ from the field – ‘Fenway Dirt’ – so that no matter wherever they are in the world, they are a part of us in that – the Fenway Park and Red Sox are there with them.”

He added, “For many of the first-timers that are coming to Fenway Park, we ensure that we are giving them ample amount of time to be respected, and talked to, let them know that we are proud of them for joining us here at the ballpark and at the same time we want to make sure that we are able to service them and service other fans that are also in the ballpark.”

The fan experience: The show!

The Boston Red Sox have something called the ‘Pregame ceremonies’ which is an amazing experience – “At the beginning of 2021, we started at nine percent capacity and then we moved a little bit forward towards 15 percent by mid-May and then we were at full capacity around May 29th. However, with fans still excited to go outside and being in the overall setting, it took us a while to even see our full crowd here at Fenway Park and we were able to actually experience full crowd.”

Pedroia is just very beloved worldwide and especially within Boston Red Sox. A World Series Champion, he treated the game with so much respect, he played the game with every ounce of energy that he had as he says, he loves baseball more than anything and added, “I relied on the people that loved me my whole life – my wife, my parents, my three boys and I just want to thank most importantly, the fans all over the world because Boston Red Sox and Red Sox Nation is everywhere.”

Because of his unquestionable talent, devotion and contributions to the success of Boston Red Sox, he was inducted to the Red Sox Hall of Fame Class of 2022 and a pregame ceremony was held at the Fenway Park to toast the baseball great.

On February 1st, 2021, Pedroia announced his retirement from Major League Baseball (MLB) after 14 seasons. On June 25th, 2021, the Red Sox honored Pedroia in a pregame ceremony at Fenway Park, and announced his induction to the Boston Red Sox Hall of Fame as part of the Class of 2022.