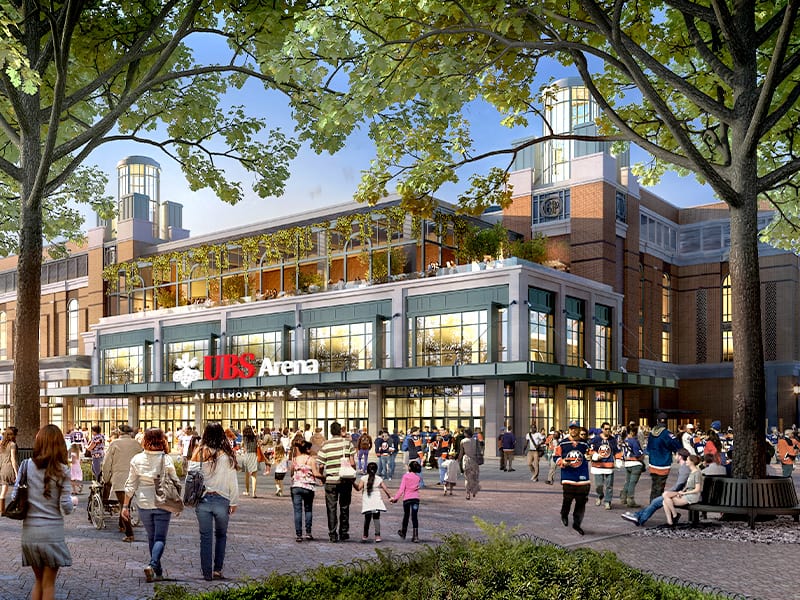 If Tim Leiweke’s (Chief Executive Officer of the venue development firm Oak View Group [OVG]) excitement is anything to go by, one can assert that the under-construction UBS Arena in New York (US) is his baby. He was athrill while gesturing toward what will be center ice at the New York Islanders’ future home at Belmont Park. OVG is leading the development and operations of UBS Arena.

UBS Arena is a $1.5 billion multipurpose arena under construction and development in Elmont, New York, next to the Belmont Park race track. The venue is projected to open for the 2021-22 National Hockey League (NHL) season. UBS Arena is one of the few arenas in the world built specifically for hockey and will be the new home of the professional ice hockey team New York Islanders.

A $1.3 billion redevelopment of Belmont Park will transform surplus land at the Long Island site into the new home of the New York Islanders, a 350,000-square foot retail and entertainment complex and new hotel that will create a world-class sports and entertainment destination.

Oak View Group (OVG) is an American global advisory, development and investment company for the sports and live entertainment industries. Based in Los Angeles (US), it was formed on November 16, 2015 by Tim Leiweke and his business partner, Irving Azoff.

‘The New York Times’ reported that Leiweke, who is also a partner with the Islanders for UBS Arena, is totally devoted to realizing the project. The sod-turning for the development was held in September 2019 and the venue is expected to stage games in about a year’s time.

There is huge demand for tickets with about half of premium club seats and the arena’s 56 suites selling like hot cakes in the past three months, Leiweke informed.

“The team generated such a buzz and we were able to ride that buzz,” Leiweke added.

Amid all the euphoria revolving around the Islanders who will finally flaunt an avant-garde $1 billion home, the prime concern arising out of the global COVID-19 situation, and especially in the United States where it is still spreading like wild fire, will remain and there will be the never-ending concern of finding ways to bring in some semblance of normalcy and ensure safety for when the team, it hopes, play host to more than 17,000 people at games in late 2021.

After coronavirus outbreak led to the sports venue sector getting shuttered, the NHL resumed its 2019-20 seasons in two so-called bubbles in Canada with no fans in the stands. Once games return to home markets and spectators slowly start getting back into arenas, fans at Belmont Park will experience many new features, including cashless concession transactions so as to make it touchless and help lines move along faster.

‘The New York Times’ further reported that no US sports league that plays its game indoors has widely permitted fans to attend games yet but the National Football League (NFL) teams who enjoy retractable roof arenas — including the Atlanta Falcons and the Dallas Cowboys – have allowed crowd to grace events in limited capacity.

Leiweke maintained, “We are waking up every day and trying to figure out how to have clean air. That is critical to get people back to the live experience. We will get their confidence back.”

COVID-19 had applied the brakes on the Belmont project for two months after New York put restrictions in place to slow the spread of the fatal respiratory disease in mid-March this year, when it struck with full force.

‘The New York Times’ also reported that the ‘Isles’ will not be the only team in a new venue. The ice hockey expansion team Seattle Kraken – the NHL’s 32nd team – will begin play next year at the carbon-neutral Climate Pledge Arena. The pandemic did not put up hurdle for the project with work getting stalled for only two days.

Leiweke’s firm OVG is involved with both arenas – UBS Arena and Climate Pledge Arena – a scenario that has presented challenges and a chance for synergy in terms of safety and sustainability. The top official informed that up to 1,000 workers are on site in each venue on a given day.

The Climate Pledge Arena is entirely privately financed by OVG with no City financing; the current project cost estimate is $1 billion. All costs and potential cost-overruns of construction and arena operations are the responsibility of OVG.

Climate Pledge Arena is a multipurpose arena in Seattle, Washington, United States. It is located north of downtown in the 74-acre entertainment complex known as Seattle Center, the site of the 1962 World’s Fair.

“These were two cities (read New York and Washington) that had to deal with the impact of the pandemic early on. We’ve taken a leadership position on sanitization. We will have sophisticated filters that clean what comes and go. We also have to remember that when the vaccine comes, it is not the cure,” the head honcho sounded a note of caution.

“We have to be at a point where the virus is on the other side of the mountain. We are going to extremes,” Leiweke added.

‘The New York Times’ informed that apart from ensuring clear air for fans, the home of the Kraken will particularly give attention to renewable energy, with solar panels on its atrium and the arena mechanical systems, heating, dehumidification and cooking systems running on electric power. Single-use plastics will be done away with over time, and the venue will enjoy electric charging stations for vehicles outside.

Ed Bosco, Managing Principal, ME Engineers (a global mechanical and electrical engineering design firm), has been entrusted with the task of studying and implementing airborne virus reduction solutions at UBS Arena. The company is working with more than 50 existing venues.

His team studied medical data including from the Centers for Disease Control and Prevention (CDC), domestic and foreign universities’ research and testing completed by equipment manufacturers and by international health research organizations. The objective is to ensure that the Belmont arena would be ahead of the health curve, an evolving process.

Bosco said Government guidance on airflow rates and occupant spacing used to reopen schools has proved to be a valuable tool. Because sports and entertainment venues come armed with high ceilings and large concourses, he said, there is more air per person than in a typical classroom.

Bosco informed that at this year’s US Open, closely supervising the operation of heating, ventilation, and air conditioning (HVAC) equipment helped increase ventilation in indoor spaces used by players and event staff by a factor of three.

Bosco also explained that active virus particles in the air can be reduced by ventilation, filtration, local dilution and exposing the virus to ultraviolet radiation.

‘The New York Times’ further quoted Bosco as stating that, “We can adapt existing buildings to operate differently when COVID is a concern and revert back to operating them as they do today when COVID has passed. At UBS the systems will be newly calibrated and heavily tested during construction so we can be more certain about the data we collect and the building’s responses to tests we are running.”

Bosco added that having time to adjust UBS Arena as per the situation which has arisen due to the pandemic, before it goes on stream, has proved valuable.

He maintained, “We’re starting to find solutions that really rise to the top. We are looking at the big picture and how that influences the return of public assembly. It feels like these events are going to be what lets us get comfortable being back together as a society.”

Also involved in the UBS project is Matt Goodrich, whose eponymous firm is responsible for layouts and designs of corporate suites and public space inside and outside of the facility. One option that the venue will be equipped with is – touchless features in the bathrooms.

“We had a project this big happening over a long period of time and then COVID popped into our consciousness relatively late in the process,” Goodrich noted.

Both arenas will also go back to earlier generations. Belmont’s architecture will feature archways and brickwork reminding one of the Brooklyn Dodgers’ Ebbets Field.

The Brooklyn Dodgers were a Major League Baseball (MLB) team, active primarily in the National League (founded 1876) from 1884 until 1957, after which the club moved to Los Angeles, California, where it continues its history as the Los Angeles Dodgers. Ebbets Field was a MLB stadium in the Crown Heights section of Brooklyn, New York. It is known mainly for having been the home of the Brooklyn Dodgers baseball team of the National League, from 1913 to 1957, but was also home to three NFL teams in the 1920s.

History is also a key element in Seattle, where the roof at Climate Pledge Arena is from the 1962 World’s Fair, homage to then US President John F. Kennedy’s focus on space exploration that Leiweke insisted on including.

The arena, which will also lodge the WNBA’s Seattle Storm, will give topmost priority to the sustainability quotient by encouraging fans to collect rainwater that will be turned into ice for their hockey team.

Commented Leiweke, “They can bring it over in buckets and we will put it into our system and plant. We will use it not only to put down the first sheet of ice but to maintain all year long.”

The Seattle Storm is an American professional basketball team based in Seattle, Washington, playing in the Western Conference of the Women’s National Basketball Association (WNBA).

As work continues on both coasts, Leiweke is a man on the trot. The Kraken will give Seattle its long-awaited NHL team, and the Islanders will be reigning in the rink in a plush arena.

‘The New York Times’ quoted Anders Lee, the Islanders’ captain, as stating, “Kudos to the crews out there to get that done for our organization and fans. It’s going to be a special spot. We are all going to enjoy the heck out of the Coliseum, give it another phenomenal ride. Belmont is right around the corner and it’s exciting.” 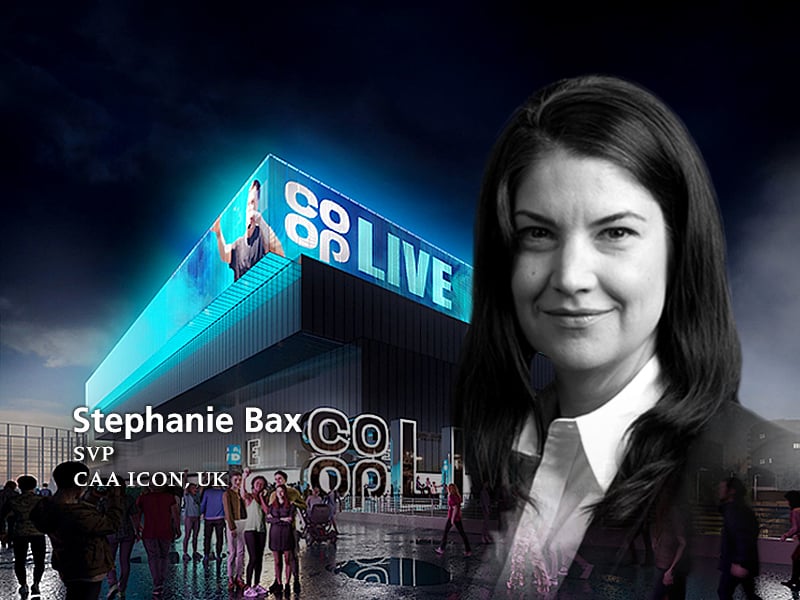 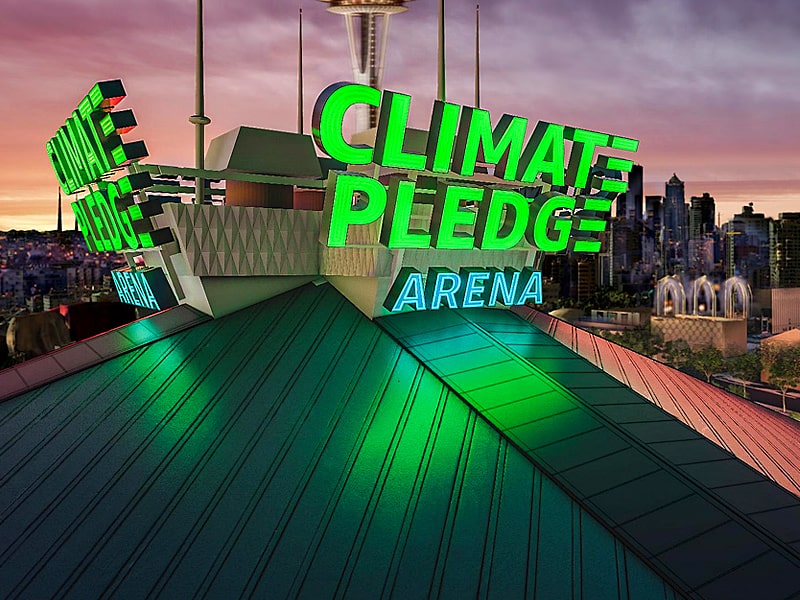