Fans pull Dons out of the woods yet again 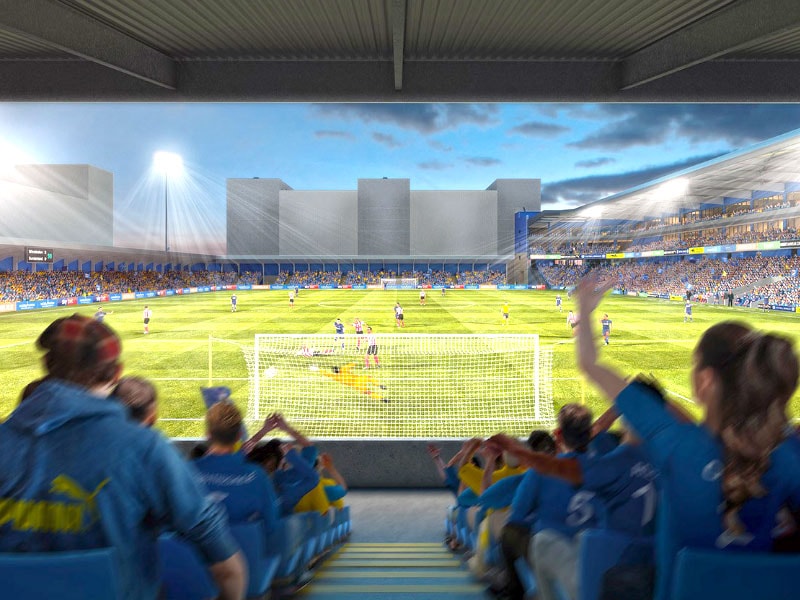 Supporters of AFC Wimbledon – the English professional fan-owned football club in UK which was facing severe cash crunch situation – has once again come to bail out the club in regard to building a new facility at Plough Lane.

In an amazing show of support, AFC Wimbledon supporters have raised more than £4m towards building a new stadium at Plough Lane in an effort to meet an £11m shortfall and maintain the club’s supporter-owned structure and spirit. Following the ‘Plough Lane Bond’ which was launched on February 5, the £4m total was passed on February 13 just in time before the February 14 deadline.

The fans want to make certain that the team can move back to the borough in time for the next season. The League One outfit (the third tier of the English football league system) present residence is Kingsmeadow at Kingston in UK.

In December last year, fans of AFC Wimbledon suffered a severe jolt – construction cost of their long-cherished venue at Plough Lane proved to be a very expensive affair and the team had an £11-million shortage to cover, with no resources at their disposal.

To make things worse, the club had not signed any contract with the construction company Buckingham Group for the main works. The company was about to wait until end of January for AFC Wimbledon to come up with the missing cash but generously decided to extend the deadline until February end.

New Plough Lane is a stadium in Wimbledon, southwest London, which is currently under construction. Once built, it will be the home of AFC Wimbledon.

The Dons had few hard decisions to take: Either deliver the stadium in raw form (which would have made it extremely hard to sustain itself) or let major investors pump in money (three investors were supposed to provide £7.5m of course, with a rider – in exchange for a part of the club). The Dons were in no mood to go in for the second option after the painful loss of their club years back.

The fan-owned club finally arrived at a solution – the Plough Lane Bond scheme to ensure that the stadium is delivered this year. With an ambitious goal of £5 million, the project allowed buyers to select the time period (five to 20 years) and interest rates (0-4 percent).

This is mainly just on investments over £1,000 but those who could not afford this much will be able to put in between £50 and £950 through the We Are Wimbledon Fund (WAWF). The more money raised, the less it will have to be secured with commercial loans.

With huge support coming in from past and previous players, celebrities and fans of other clubs (including the Football Supporters’ Association), the goal was met just hours after the initial deadline of February 14.

Now the bond remains open to further decrease the amount of debt AFC Wimbledon has to take in order to pay for the stadium. While £11 million would have been way too much to run the day to day activities of the club, debt of £7 million is what Wimbledon were already contemplating to take. As of now, the stadium funding is covered and the club is on safe ground without compromising on its operating principle.

The Plough Lane Bond was established by the Dons Trust, the mutual supporters’ trust which set up AFC Wimbledon in 2002 after the former Wimbledon FC, having moved out of Plough Lane, was taken by their then-owners to Milton Keynes and ultimately became MK Dons. The new fan-owned club became a beacon to the supporters’ trust movement after their formation and by winning promotions from the Combined Counties League through to the Football League in 2011, then League One five years later.

In December last year, the Trust Chairman, Mark Davis, told members that costs had spiralled to £31.5m for the new 9,000-seat stadium which has been planned to fulfil fans’ dreams of a return close to the old Plough Lane home. Davis said the Trust had also been reflecting on a proposal to raise £7.5m from private investors in a quid pro quo arrangement – investors would want shares in return and their own representatives on the board.

This news of a proposed dilution to the Dons Trust’s ownership led to howls of protest, particularly among leading figures in the original campaign against the Milton Keynes “franchise” and formation of AFC Wimbledon. The bond was launched after quite a few supporters went on an overdrive to come up with an alternative solution, to raise funds without affecting the ownership structure. Contractors Buckingham had made it clear that they could continue with construction work only until the end of February. After this period, money would have to flow in.

Explaining the principle, the Trust said, “External investors have offered to fund some, but not all, of the £11m required. But their terms would bring an end to a principle that has guided us through the past 18 years, which is that the Dons Trust (and therefore the fans) must have majority control.”

Charlie Talbot, one of the bond’s organizers, said after passing the £4m total -“It is very likely the club will be able to secure the remainder in commercial lending, ensuring that the stadium can be completed on time. To get back to Plough Lane as a fan-owned club will be the culmination of almost three decades of campaigning and hard work by so many people.”

The bond has now been extended until May 14.

A staunch supporter Damian Woodward decided to set up the bond with Xavier Wiggins and Charlie Talbot.

Remarked Damian, “I am very pleased that we’ve managed to change the narrative, we are relaunching the bond again with a new target of £7.5 million.”

Damian added, “It will be more than a dream come true having not been back there for 30 years. Having been at Plough Lane at the age of 10 and going back, it will be an incredible feeling for many fans and really uplifting for the community.”

Wimbledon’s former greyhound stadium was torn down in December last year and AFC Wimbledon is expected to move into the new arena in time for the 2020-21 seasons.

Wimbledon FC, as the club was known then, left Plough Lane in 1991, first sharing Selhurst Park with Crystal Palace FC, before moving to Milton Keynes where they got the name Milton Keynes Dons.

AFC Wimbledon was formed in 2002 by hardcore Wimbledon fans who were sulking over the move to Milton Keynes.

AFC Wimbledon Chief Executive Joe Palmer observed, “I’m delighted by the success of the bond so far and keeping it running was one of the easiest decisions I’ve been a part of since I’ve been here.”

“Further discussions on the loan deal are ongoing and I’m grateful for the additional assistance of the bond team around that. I’d like to add my words of thanks to everyone involved in running and operating the bond scheme from the volunteers and the Trust. Please everyone keep supporting this great initiative,” Palmer added.

Wimbledon AFC’s new home is designed by the London-headquartered design group KSS who excel in architecture, interior design, branding and graphics. KSS has also lent their expert touch to Brighton’s Amex Stadium in UK and the Al Rayyan arena, which will host games at the 2022 World Cup in Qatar.

The under-construction New Plough Lane stadium will be able to sit 20,000 spectators and the price tag will be somewhere in the range of £25 million and £30 million – largely by filling in the two corners opposite the West Stand.

Retail space, a squash and fitness club, car and cycle parking as well as more than 600 new homes will come up as part of the project.

The first 114 homes on land opposite the stadium are expected to be completed by 2021.

The West Stand will have four floors and three tiers with media facilities and 12 glass-fronted executive boxes looking down on to the pitch. The players’ tunnel will lead out from the center of the stand, with the managers’ technical areas on either side.