Germany’s BayArena to be remodeled 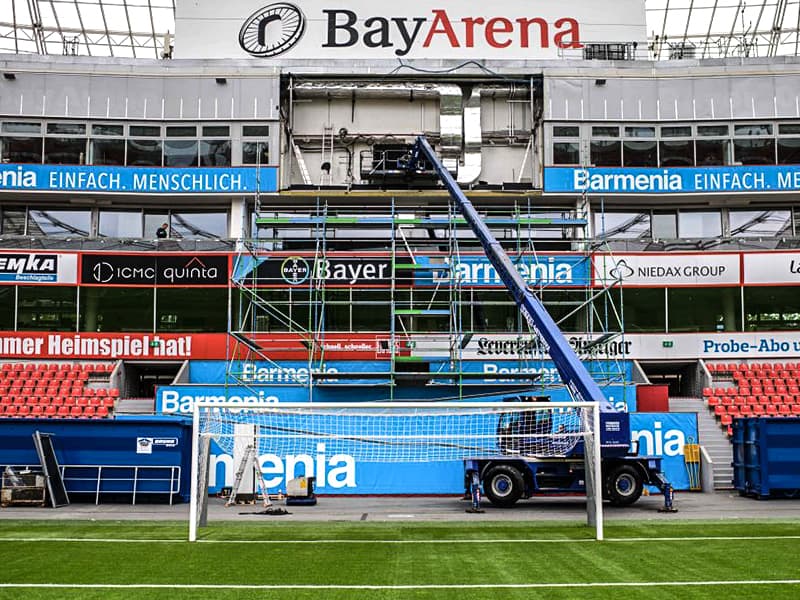 Reconstruction work will take place at BayArena in Germany and the facility will not be in a position to receive any spectators in the near future. Among other things, the scoreboards will be replaced. The conversion work will be carried out by the end of August.

BayArena is a football stadium in Leverkusen, North Rhine-Westphalia, Germany, which has been the home ground of Bundesliga club Bayer 04 Leverkusen since 1958. The club competes in Bundesliga, the top tier of German football, and plays its home matches at the BayArena.

The scoreboards, which were previously attached to the north and south sides of the stadium, have already been removed and will be replaced by bigger models. The old display boards had a size of 68 m² each. The new scoreboards will boast a size of 97 m² each and everything displayed will be of superior quality.

The new scoreboards will be placed on the fourth floor. The old ones were placed on the third floor of the arena. There will be more leg room for fans who have mobility problems. The entrances in the eastern area of the BayArena will be equipped with non-slip covering in the club colors red and black, which has already been implemented in the western area last year.

The 30,210-capacity BayArena was initially built in 1956. The ground was earlier called Ulrich-Haberland-Stadion for the first 30 years. The stadium became more visible and shot to fame during the ‘90s when it was almost totally reconfigured. It became quite a futuristic stadium going by the ‘90s standards. Several changes were made in the design during implementation.

In 1986, the redevelopment work of the whole ground began and lasted for over a decade. The stadium operators wanted the whole venue to be on the line of Ruhrstadion in Bochum (Germany). This means single-tiered stands close to the pitch with simple roof. However, as work progressed, demand changed and designers had to make amendments carving out space both for families as well as for corporate clients. The changes made to the stadium reduced the capacity of the facility from planned 35,000 to some 22,500.

Since 1998, the venue got the name BayArena. Due to huge demand for tickets and greater possibilities for generating extra profits from non-sporting events, the ground was further remodeled in 2008-09. This time, a small second tier was built above the existing stands, more infrastructures came up around the stands and a huge, imposing roof was built.

With an area of 28,000 m², the roof is amongst the largest makrolon roofs in the world. The main technical challenge was combining a soft cable structure and a stiff substructure for the makrolon.