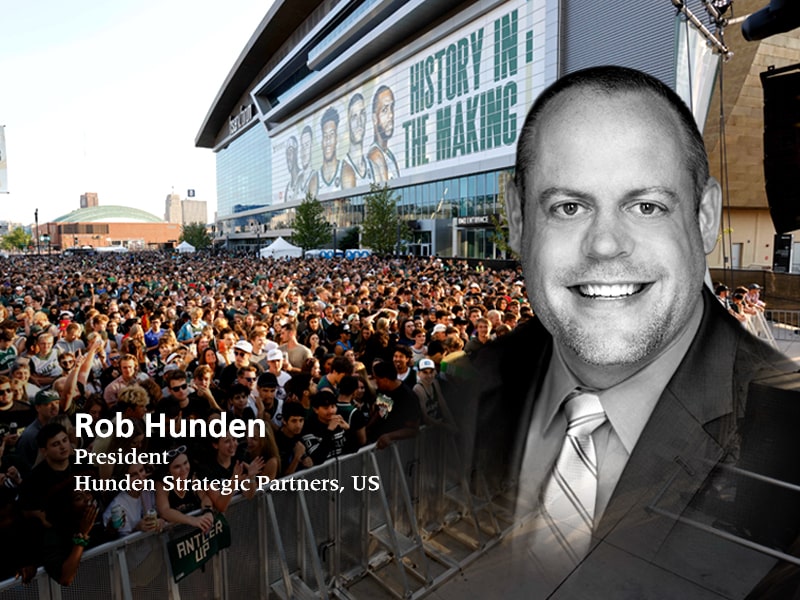 Since launching Hunden Strategic Partners (HSP) in 2006, Rob Hunden and his firm have been a sought-after for major destination projects including sports, nightlife, tourism, convention and hotel projects, most with public and private components.

Rob Hunden, President, Hunden Strategic Partners, US, has worked on more than 800 projects and processes, with more than $6 billion in projects built since 1996. Hunden and his Chicago-based firm offer extensive experience in the economics of placemaking, primarily via transformative real estate projects like mixed-use stadium districts. He has provided economic development, market and financial feasibility, impact, developer selection, and planning expertise for more than 650 projects and studies over the past 20+ years, totaling more than $4.5 billion in developed real estate. Projects include major league football, baseball, hockey, basketball, soccer, golf, and motorsport racing venues.

Hunden Strategic Partners (HSP) is a full-service global real estate development advisory practice, providing public and private sector clients with confidence and results so they can move their projects from concept through execution.

Rob Hunden – who helms the Chicago (US)-based Hunden Strategic Partners (HSP) – provides exclusive details to ‘Coliseum’ as to how HSP has helped to bring a spring in the steps of “dead downtowns” in the United States and the greatest case-in-point is ‘The Fiserv Forum and The Deer District’. He also points out how the mixed-use and entertainment districts hold the key to venues scripting success stories.

Remarked Rob Hunden, “We are based in Chicago but we work worldwide. We work on major transformative projects which often include major stadiums and arenas as well as all of the mixed-use commercial uses and other uses around those stadiums. So, most of our clients are either public sector or public sector-oriented or private sector developers doing a public-private partnership of some sort.”

Hunden stated that over the last handful of years mixed-use facilities has become the name of the game – “This entire mixed-use concept is picking up steam not just in the United States but in Europe and the MENA region too. This idea of a mixed-use commercial and entertainment district that surrounds a major event venue is absolutely becoming key to the actual development of the venues themselves.”

The majority of Major League Baseball (MLB), National Hockey League (NHL) venues as well as National Basketball Association (NBA) venues have mixed-use entertainment districts around those facilities – “Some of those are dedicated districts and about a quarter of those districts are absolutely dedicated to facilities often to make the facility viable both financially and from a fan engagement and enjoyment perspective and that continues to grow.”

The financing streams and revenue streams to develop these projects differ from region to region and country to country. But, as Hunden put in, “You need money to develop. In some places, the tab is picked up strictly by the Government, other places it comes from the private sector and most cases it is some sort of combination of both. But, these projects are becoming a very expensive affair. The average arena is approaching a billion dollars, the average football stadium is over two billion dollars, and these projects have been tapped out from a lot of these Government tax streams or other streams of revenue that we used to rely on.”

Hunden advised that these taxes can be generated and captured by a district around the development – of course, depending on the country and the region – “By capturing these incremental revenue streams we can help fund the project themselves. In fact, in two out of the three major league deals that we are doing in the United States, we are following the above formula.”

Hunden pointed out that sports and entertainment venues have often been suggested by leaders as a “placemaking catalyst”. He further pointed out that “New businesses and developments will come up next to convention centers and arena only if the venue bustles with activities the whole year round”.

A mixed-use development facility does not necessarily bring a 360 degree change to the neighborhood and it “often just becomes surrounded by parking lots”.

What are the benefits?

The Battery Atlanta is a mixed-use development located in the Atlanta (US) metropolitan area, approximately 10 miles (16 km) Northwest of downtown Atlanta in the unincorporated community of Cumberland, in Cobb County, Georgia. It is adjacent to the 41,084-capacity Truist Park, home of the Major League Baseball team Atlanta Braves. The complex is a mix of shops, dining, living, and workspace in the area surrounding the ballpark.

Hunden pointed out that The Battery is a “Suburban walkable district. Compare this with the 40,615-capacity Guaranteed Rate Field in Chicago (US) which is an extremely urban dense place and it is surrounded by surface parking. We conducted a study for the Guaranteed Rate Field about 15 years back and suggested to fill all that in. However, the owner of the MLB team Chicago White Sox did not heed to our suggestions. So, they still sit there and not really having a great place.”

He again drew a comparison between Guaranteed Rate Field and the 41,649-capacity Wrigley Field in Chicago, home of the MLB team Chicago Cubs – “The Cubs invested tonnes of money to really amp up that neighborhood and that’s absolutely on fire seven days a week.”

Yas Island is an island in Abu Dhabi, United Arab Emirates. It occupies a total land area of 25 km². It is a popular leisure island and one of the top tourism projects in Abu Dhabi. Yas Island holds the Yas Marina Circuit, which has hosted the Formula One Abu Dhabi Grand Prix since 2009.

Asserted Hunden, “Yas Island is buzzing with activities and is jam-packed. It is certainly known as an event venue for many attractive events. It also has a tonne of other mixed-uses both for the visitors but also to help create a place to not just visit but again to live and work.”

The Coca-Cola Arena is indeed a very “Happening place. But, it did not happen all at once, it took some time and there could still be some more infill and there could be even a little more night life than what exists. But, overall, it is a very lovely place and we can all just walk outside and enjoy with all the 34 residential buildings, the whole strip of retail and restaurants.”

A mega project and it includes the stadium, arena, a sports hall and “All these kinds of bells and whistles that everybody is trying to build these days but also looking at potential for mixed-use commercial so it is not just entertainment-oriented but it is all the above.”

Fiserv Forum and The Deer District

One of the hottest new areas in Milwaukee (Wisconsin, US) to eat, drink and play is the Deer District. Built on the 30 acres surrounding the 17,341-capacity Fiserv Forum, the new home of the NBA team Milwaukee Bucks, this neighborhood is filled with restaurants, entertainment, events, and more. In May 2019, the Bucks announced Fiserv Forum is the central building in the 30-acre development district around the arena newly named ‘Deer District’.

The ‘Deer District’ is one of the projects that Hunden Strategic Partners is working on right now “We are now working on Phase 2 of The Deer District which is sort of their mixed-use development. But it’s only about two blocks right now and so they have got another six blocks around that is going to make a part of Phase II. It was a totally blighted area that was literally the end of the road and literally just ended there. This area was really cut off from the rest of the downtown area which has got transformed and we are working to create both consistent feasible activity and profit for everybody involved.”

People come to Deer District not only when the teams are playing at Fiserv Forum but also to savor the mixed-use offerings of The Deer District and “By using geo fencing data we can see exactly how many people come and where they come from, we can also see where they congregate. So, they are pretty much jam-packed in front of The Forum and in the alley where few bars and restaurants stand. So, now we want to extend that to the rest of the City. We also have the ability to see where people come from and we realized that people came from all over the place.”

Robert Hunden is loud and clear about one thing – venues can no longer attract people if it does not boast mixed-use offerings and an entertainment district. Gen G and today’s discernible fans just do not step into a stadium to watch the game, but they want a venue where they can let their hair down, soothe their frayed nerves, shop till they drop, and tickle their taste buds. It will have to be non-stop entertainment for them, a venue that never ceases to amaze. So, make way for the ‘live-work-play’ venues of today.