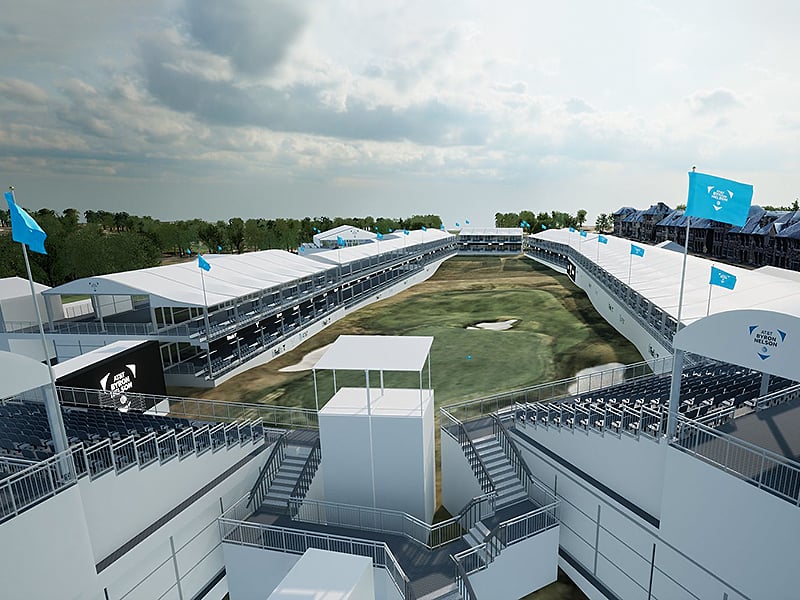 Coming off their tournament’s first sellout since 2008, AT&T Byron Nelson (golf tournament in Texas, US) officials figured: Let’s go even bigger and better.

‘The Dallas Morning News’ stated that better as in spectator enhancements throughout TPC Craig Ranch (golf club in McKinney, Texas) and family-oriented offerings during tournament week, including the final round, which falls on May 14th, Mother’s Day.

The AT&T Byron Nelson is a golf tournament in Texas on the Professional Golfers’ Association (PGA) Tour, currently hosted by TPC Craig Ranch in McKinney, Northeast of Dallas, US.

The TPC Craig Ranch is a private golf club in South Central United States, located within the community of Craig Ranch in McKinney, Texas, North-Northeast of Dallas. Designed by major champion Tom Weiskopf, the championship golf course is a member of the Tournament Players Club network operated by the PGA Tour.

The Professional Golfers’ Association is the professional body which represents the interests of teaching and club golf professionals in the United Kingdom and the Republic of Ireland. It was established in 1901 and is based at The Belfry near Birmingham, England, UK.

The Professional Golfers’ Association (PGA) Tour is the organizer of professional golf tours in the United States and North America. It organizes most of the events on the flagship annual series of tournaments also known as the PGA Tour, as well as the PGA Tour Champions (age 50 and older) and the Korn Ferry Tour (for professional players who have not yet qualified to play on the PGA Tour), as well as PGA Tour Canada, PGA Tour Latinoamérica, and PGA Tour China. The PGA Tour is a nonprofit organization headquartered in Ponte Vedra Beach, Florida, a suburb southeast of Jacksonville, US.

‘The Dallas Morning News’ further stated that the “bigger” part already is generating buzz, six months before the tournament. Tournament Director Jon Drago shared renderings of the double-deck structure that will surround the TPC Craig Ranch’s signature hole, the par-3 17th, creating a true stadium look and atmosphere on a hole that already was a fan favorite.

Nelson officials estimated that about 3,500 fans surrounded the 17th hole for the Sunday round this year. For next May’s final round, at least 6,000 fans will be able to watch at a given time. The 17th-hole enhancements have been a major selling point as ticket sales were launched two months earlier than normal, on November 10th. The tournament already is 45 percent sold out.

Put in Drago, “People get energized by how far it’s come and the popularity of the hole in just three years”, adding that many hospitality customers have requested to move to No. 17 “to be part of the excitement around it”.

One of the most recognizable holes on the PGA Tour is the par-3 16th at the TPC Scottsdale (a 36-hole golf complex in the Southwestern United States), which is surrounded by 275 skyboxes, set up to hold 20,000 fans and has a raucous atmosphere that is more football than golf.

To create more of a true stadium look, Nelson officials are adding public bleachers behind the green, with concessions available at the top of the seating area. Also, 41 hospitality units are being added, raising the number of hospitality units on the hole to 145.

Drago informed that 90 percent of those hospitality units were sold during the renewal and pre-sale process. Drago said the renderings “depict the scale of the changes around 17, which helps tell the story of the bigness of what we’re doing there as well as the momentum and interest we’re having now.”

Nelson officials are planning other enhancements, some of which will be announced at later dates, but some of them include:

Although it is too soon for player commitments, the Nelson already has extended two sponsors’ exemptions, continuing the tournament’s longstanding tradition of showcasing young players, particularly Dallas-Fort Worth-area talent.

The exemptions have been extended to twins Parker and Pierceson Coody, who starred for Plano West and helped lead Texas to the 2022 National Collegiate Athletic Association (NCAA) team championship.

Pierceson and Parker are current competitors on the Korn Ferry Tour and PGA Tour – Canada, respectively, and have each seen success on their professional paths. Pierceson’s eyes are on the horizon, though, as he hopes to one day compete against his brother on the PGA Tour – golf’s biggest stage.