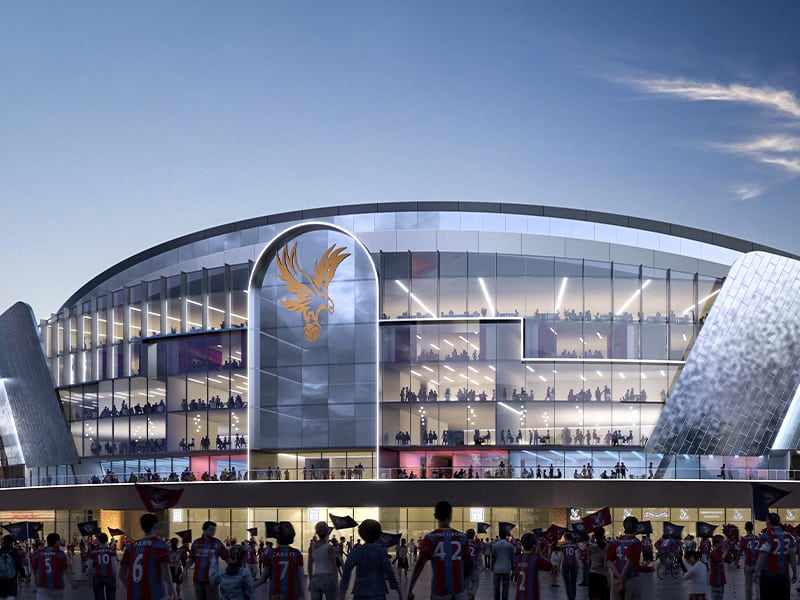 The Premier League team Crystal Palace F.C. (UK) will have to wait for at least another year before they can start work on redeveloping their home venue – Selhurst Park.

The ‘football.london’ stated that ‘The Eagles’ were given the green light by the Croydon Council back in 2018 to rebuild the main stand – increasing the capacity from almost 26,000 to around 34,000.

The Crystal Palace Football Club is a professional football club based in Selhurst in the Borough of Croydon, South London, England (UK), who currently competes in the Premier League, the highest level of English football.

The 25,486-capacity Selhurst Park is a football stadium in Selhurst in the London Borough of Croydon which is the home ground of Premier League side Crystal Palace. The stadium was designed by Archibald Leitch and opened in 1924. It has hosted international football as well as games for the 1948 Summer Olympics, and was shared by Charlton Athletic from 1985 to 1991 and Wimbledon from 1991 to 2003.

The ‘football.london’ further stated that works were originally thought to have been completed and the new stand ready for use by the start of the 2021-2022 seasons, though several setbacks have meant that date couldn’t be met.

One of the prerequisites of the redevelopment has been the agreement that the club would purchase six homes on Wooderson Close that needed to be knocked down – though this is yet to materialize.

The residents in those homes need to be given 12 months’ notice of this, putting a minimum one year delay on the redevelopment until work can begin. New homes must also be found for those being lost, which adds further complication to the issue.

In November 2020, a Section 106 agreement was approved by the Council setting out how the Croydon community would benefit from the redevelopment, which includes £100,000 for new cycle lanes and £330,000 for a new controlled parking zone (CPZ).

That agreement still needs to be signed off before the club can purchase the six properties of Wooderson Close.

Then there is the small piece of land that ‘The Eagles’ need to purchase off of Sainsbury’s, whose supermarket borders the stadium.

Last year, Palace Chairman and Co-Owner Steve Parish accused the supermarket of holding Palace “to ransom” and said that their financial demands were blocking the project from getting off the ground.

It is being reported that discussions between Palace and Sainsbury’s are still ongoing.

A Sainsbury’s spokesperson said, “We are actively engaged with the owners of Crystal Palace F.C. We’re listening to their concerns and have shared a proposal which we believe presents a favorable and logical way forward. We have always been happy to progress the sale of the land at a fair market value.”

« Previous News: ‘Hong Kong Stadium will not be a spent force’
» Next News: Rossoblù home revamp to start in 2022