Aztec Stadium – home is where the heart is 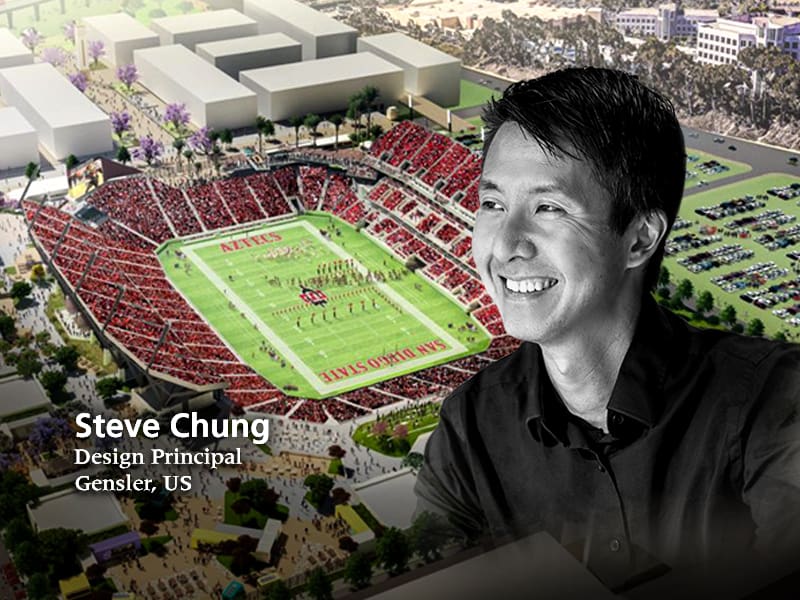 As the Design Principal of architecture firm Gensler, US, Steve Chung approaches each project with a strong design sensibility and a passion for improving the quality of life for all users. For over 20 years, Chung has led designs for sporting, training, recreation, and esports facilities that leverage inclusivity, accessibility and performance to create personal growth and community wellness. The experiential environments that he crafts unite guests, from fans to players.

Among his oeuvre are the Banc of California Stadium and the LAFC Performance Center for the Los Angeles Football Club and he is armed with Bachelors in Architecture from Cornell University.

In an exclusive interaction with ‘Coliseum’, Steve Chung who is presently leading the design of San Diego State University’s new 35,000-seat football stadium – Aztec Stadium – tells that a stadium should be designed in such a manner that it exudes that ‘home’ kind of feeling and fans say ‘Yes, this is the place where I want to spend my every weekend’. He further narrated that Gensler is trying to lend that homely touch to the Aztec Stadium and provides the level of detail on trying to make the facility uniquely San Diego.

The Snapdragon Stadium, known during its planning and early construction phases as Aztec Stadium, is an under-construction American football stadium in San Diego, California (US) on the campus of the San Diego State University at SDSU Mission Valley, a 166-acre non-contiguous expansion parcel of the University campus.

He started off by stating that one of the primary challenges the SDSU Aztec Stadium gave “Us was to design a collegiate football stadium that had unmatched 10 experience what was really uniquely San Diego”.

Talking about his company, he informed that Gensler is the largest design firm in the world and has deep expertise in over 20 building-types – “We have been heavily influenced by our retail hospitality and airport expertise. We have experts like that just like we do in sports and we have really kind of bundled that together to become the creative leaders in fan experience.”

He stated that Gensler wants to “Create a sense of belonging in connection with the community” and this they have best executed in the 22,000-capacity Banc of California Stadium in Los Angeles, California. He stated they want to replicate this same concept in the Aztec Stadium and establish the venue’s strong sense of connectivity with the City where “One can see Downtown Los Angeles through the seating bowl”.

Gensler goes about with their project with the motto – “Integrate the traditional team brand with high level hospitality interiors”.

The project is underway at Mission Valley in San Diego. It will accommodate 35,000 fans with all different kinds of seating arrangement. It is a partnership with Clark Construction and University and “We are trying to ensure that we can deliver everything that the University wants to their best possible value”.

Maintained Chung, “One of the unique challenges is that San Diego is a very proud and unique City. When you think of the coastal character, all the different piers, the naval heritage, this notion of being outdoors – urban neighborhood and gardens with that level of kind of like craft beer and gastro pubs that really needs to be in the stadium and then you always think of ballpark when you think of San Diego – kind of these traditional esplanades that are influenced by the public places.”

He put in, “We have created this diagonal esplanade leading straight to the building. So, our challenge was how you get all these diverse characters into one building.”

Chung further narrated, “We felt that districting within the building is very important and this was something that made the University feel very comfortable that we are talking a little bit about those parts of San Diego – those craft gardens really creating the atmosphere further East and this ends on the part of the building where those East communities will create a vibe on the West side too along with the students section. And its evolved and we have actually connected very directly parts of the City to these different ideas and the esplanade that leads you up to the opening of the building.”

The main concourse is located on grade here. In Los Angeles, “It is the norm with the 78,467-capacity LA Memorial Coliseum and the 90,888-capacity Rose Bowl Stadium in California on grade. But we thought about taking this to the next level. The whole development boasts lush landscape concourse where the fan experience would remind them of the City that they are so proud of. We also wanted to create not just a concourse that had beautiful landscaping but the planet in a very different way. The stadium boasts ‘Garden Rooms’ and we plan to have in the concession areas that authentic local food offerings centered around the kind of landscaping that the people in San Diego are very used to and that they can order their food in a very different way and have a place to wait for their food as we begin to want to try to find different ways of delivering that concession other than the belly up concession, finding these places where they can relax and really it is about creating that sense of anticipation of wanting to go to a big game because you love the amenities and food and beverage offerings in addition to seeing an amazing college football game.”

It is more about lending the traditional touch to the stadium – thoughtfulness of lighting materials, furnishings and color to create a place where the community feels like it matches their identity. This factor holds great significance for Gensler.

There’s quite a bit of coastlines in San Diego and Gensler thought of doing something very distinctive – “Playfully kind of reminding people that the geometry of those piers and their coastline and giving this very social experience where one quite often meets up with friends in the stadium with whom they used to play football in college and now you see them seven times a year and look forward to meeting them just as much as the game – this is a place where you can go socialize with them while still watching the action and still having this presence among the beach communities here.”

The above scenario is a very hospitality kind of experience for Gensler and it is not just about the shape of the piers themselves but the finishes, the attention to detail on lighting, specific food and beverage offerings, the socialization area that goes on back of those loge seatings. Forty-six unit loge premium seating in the under-construction arena when it is combined with this kind of social amenity, it gives a very homely feeling.

He added, “The design of each of the suites in the stadium gives a feeling of belongingness, where the designs speak to you so that the whole other array of ways that people can feel like ‘yes, that’s the place I want to come and spend every weekend’. This is the notion that there is some sliding glass over here, there is this San Diego concept where you have these places to dine in your suite but people walking by, people you want to socialize with, you want to network with, you want to connect with, will be walking by and you can open the sliding glass and it is a place where you can kind of socialize and your friends can come into your suite. A very inviting kind of atmosphere.”

Then there is the overall identity of the building which holds a lot of significance – “We spent a lot of time talking about the fan experience – the landscaping, the material, the lighting, the way the spaces work, when people drive up to this building it is very important that it presents a powerful image. So, what we thought about a little bit here is combining a lot of images but at the corners of the stadium – these are the main places where people will first see the stadium -from a car down here in the bottom in the North-West and from the Metro in the South-East – both of these areas will combine thoughts about the naval heritage, the connection with the waterfront of San Diego. It is a military City and boasts rich cultural heritage. So, the stadium entry has been designed as such that it leaves a lasting impression on the visitors’ minds.”

He summed up by stating that when one enters the Aztec Stadium, it will evoke the naval images and also kind of “Have this woven tapestry feel and then using the colors to create a kind of collage that when fans enter the facility they know that it is very uniquely not just San Diego but also San Diego State and Gensler wants to make that special place not just a visual perspective but also giving the stadium a touch of belongingness and people feel like it is theirs.”

Steve Chung believes in the maxim – ‘Home is where the heart is’ and Chung and his team at Gensler are working their fingers to the bone through the warp and weft of the stadium design to ensure that the Aztec Stadium is not just a structure but a place where fans feel right at home.