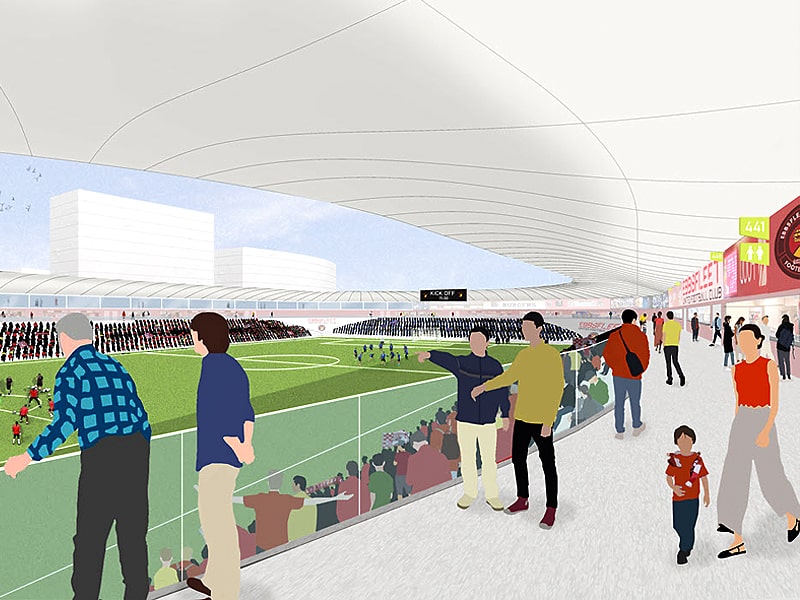 The National League South team Ebbsfleet United Football Club (UK), in partnership with the Landmarque Property Group, is excited to announce plans for a new waterfront neighborhood with a new stadium at its heart.

‘Ebbsfleet United FC’ stated that the emerging plans are for a c.40-acre brownfield site located in Ebbsfleet, close to Northfleet’s historic harbor and the river. Its redevelopment will bring up to 3,000 new jobs in the retail, leisure and service sectors, including apprenticeships during construction and end use employment opportunities, providing a real boost to the local economy. The plans will also secure the long-term future of the club by building a new multipurpose 8,000-capacity stadium.

The Ebbsfleet United Football Club is an English professional football club based in Northfleet, Kent (UK). As of the 2021-2022 seasons, the club competes in the National League South, at the sixth tier of English football.

The 4,769-capacity Stonebridge Road is a multipurpose stadium in Northfleet, Gravesend, Kent, England (UK), also known as the Kuflink Stadium for sponsorship reasons. It is primarily used for football matches. The Stonebridge Road Stadium was constructed in 1905, and was initially the home of Northfleet FC, which merged with Gravesend FC in 1946. It serves as the home ground of the Ebbsfleet United F.C.

The Landmarque Property Group is an Irish-based Property Investor and Development Company delivering mixed-use property in Ireland and the United Kingdom. The company create spaces for people, and focus on creating great buildings and environments that people love to live in, to work in and engage with each other.

‘Ebbsfleet United FC’ further stated that the vision is to design a new and vibrant neighborhood with new homes, shops, cafés, offices, medical services, and community venues. There will be over three kms of new pedestrian and cycle links through the community and along the Thames improving connectivity to the Gravesham town center, and publicly accessible green spaces across the site.

This unique opportunity will consider the sites natural waterfront position and diverse cultural heritage, creating a place for everyone and attracting new visitors to the area.

A spokesperson from the Northfleet Harbourside said, “We are pleased to be bringing forward this exciting proposal in Gravesham, with a new stadium for Ebbsfleet F.C. at the heart of the new neighborhood. The Stonebridge Road Stadium is a special place for the club and its supporters, and as such we need to continue investing in its facilities to not only ensure we comply with modern safety regulations, but to also secure the long-term future of the club. The new venue will provide best-in-class public amenity, catering and tiered seating for the club supporters, alongside wider community benefits including a new sports medical facility.”

The spokesperson added, “We are excited about our plans for Northfleet and look forward to meeting with the residents, businesses and the wider community to discuss our proposals.”

Consultation is planned for this Summer when initial plans for the regeneration of the site will be shared with the community. Residents will have the opportunity to share their ideas through interactive workshops to be held at the football stadium.

Following consultation and the development of the proposals, an outline planning application is likely to be submitted at the end of this year to the Gravesham Borough Council.