‘Family Stand’ to come up at Wetherby Road 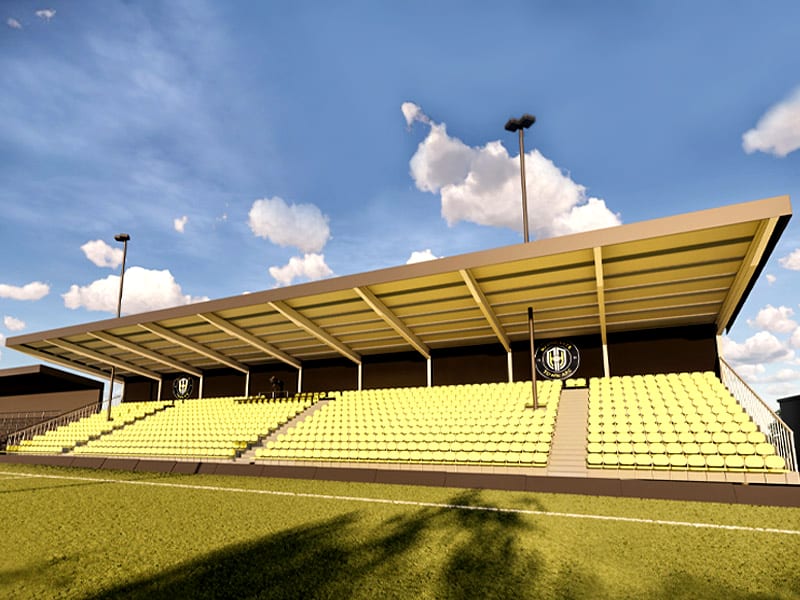 Construction work on a new family stand is being started by the English National League club Harrogate Town FC in their home venue – CNG Stadium. The club is looking to bring their ground up to Football League standard. Work is expected to be completed by mid-July.

CNG Stadium – also known as Wetherby Road – is a multifunctional stadium in Harrogate, England. It is currently used mostly for football matches and is the home ground of Harrogate Town. The stadium can hold up to 3,800 fans.

In place of the existing stand of 350 seats in the stadium will come up a new structure providing a total of 880 seats, all under cover, taking the stadium capacity to just over 5,000.

The upgrade work will enhance the facility’s capacity to above the 5,000-mark and mean that there will be more than 1,000 seats in the ground – minimum requirements for entry into League Two, should the team realize their ambition of promotion from the National League.

The new stand at the CNG Stadium will also feature a concourse with a food outlet and bar area as well as male and female toilet blocks.

Harrogate Town is striving to gain promotion to the English Football League (EFL) by developing its stadium further to meet EFL criteria.

Said Club Chairman Irving Weaver, “Apart from meeting future EFL criteria the new stand will provide significantly more seating so that we can accommodate more families and supporters that would prefer to sit than stand to watch their football. We are focused on continuing to improve the matchday experience for supporters.”

Substantial investment is being put into the new development and the project is being delivered by firms local to the region – Evora Construction, Harrogate Steel, ç and Structsure Engineers.

First Team Manager Simon Weaver added, “Hopefully it shows supporters and everyone in Harrogate that whilst we are striving to achieve promotion, we are continuing to improve our stadium, receiving EFL approval for ground capacity. We already have a great atmosphere on matchdays and the new family stand will allow more families to enjoy watching exciting football in a comfortable, safe environment.”

“This is another signal of intent. It’s another of the building blocks in place that we hope will help to take us where we want to be,” Weaver further noted.

All remaining regular-season fixtures in English football’s fifth tier have since been canceled, and it remains to be seen how issues of promotion and relegation will be determined.

Simon Weaver’s men could yet end up playing in League Two in 2020-21, but even if they do, they would still have until the end of March next year to get their ground up to par.

‘Family Stand’ to come up at Wetherby Road