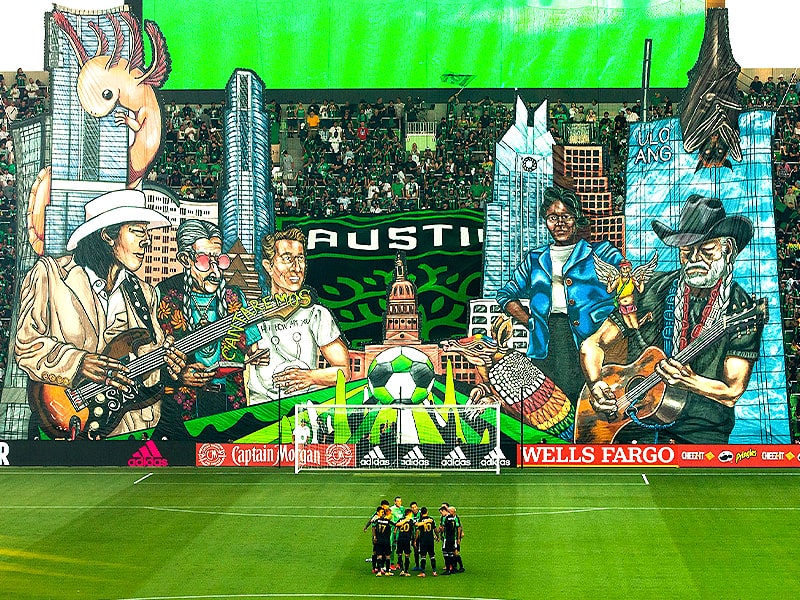 Austin (US) turned into soccer heaven on the night of June 19th as full-of-beans 20,738 spectators packed into the Q2 Stadium for the Major League Soccer (MLS) team Austin FC’s inaugural home match.

The ‘MLS’ stated that it was a fit-for-the-occasion moment and ecstatic fans gave the Austin FC – who have started playing in the 2021 season – a rousing welcome and filled the sleek building with noise, rhythm and even a sweeping pregame tifo paying ode to the City’s history and culture.

Austin FC is an American professional soccer club based in Austin, Texas (US). The club competes in Major League Soccer (MLS) as a member of the Western Conference. Founded in 2018, the club began play in the 2021 season. Their home stadium is Q2 Stadium in North Central Austin.

The 20,500-capacity Q2 Stadium is a soccer-specific stadium located in the North Burnet section of North Austin, Texas (US). It is the home of Austin FC, a Major League Soccer (MLS) team that began play in 2021.

Major League Soccer (MLS) is a men’s professional soccer league sanctioned by the United States Soccer Federation, which represents the sport’s highest level in the United States and Canada. The league comprises 27 teams – 24 in the US and 3 in Canada – and plans to expand to 30 teams by the 2023 season.

Austin FC matched wits with its peer team San Jose Earthquakes in an open, ebb-and-flow off air that gave the capacity crowd just about every reason to rejoice.

The San Jose Earthquakes are an American professional soccer team based in San Jose, California. The Earthquakes compete as a member club of the Western Conference of Major League Soccer. The franchise began play in 1996 as one of the charter clubs of the league.

“It was electric tonight. It was amazing. From every chance, every little pass, every good moment, you could feel them,” said lively winger Jon Gallagher (Irish footballer) of Austin FC.

The ‘MLS’ further stated that the crowd would have gone totally berserk had the match not ended in a 0-0 draw against the San Jose Earthquakes and Austin FC would have had walked away with a win.

Stated Uruguayan footballer Diego Fagúndez who plays as forward for Austin FC following the 0-0 draw, “When I stepped out right before the game started, I got the chills. That’s something special. I know they’ve been working so hard for it. I know the whole team is ready for it, and it’s kind of sad that we’re leaving with a tie, because we pushed so hard, they were singing so hard and we wanted to give them more.”

Austin’s rapturous reception of their new team is the talk of the town now. There’s a lengthy season-ticket waiting list, the Verde’s striped home jerseys are selling like hot cakes like few in MLS and players and staff have shared stories of the startling extent of the person-to-person hospitality shown to them since arrival.

The Austin FC’s performance was par excellence and warmed the cockles of fans’ hearts.

The night encapsulated Austin’s start to life in MLS – ambition, promise and the nagging frustration of breakthroughs yet to be made. Achieving their initial goal of playoff qualification will hinge on whether they can push that last bit to fruition.

The Head Coach of Austin FC, Josh Wolff, concluded by stating, “The energy that our players felt and received was incredible. In return, it’s about competing and putting forth the effort, and really showing what the essence of their club is about, the hard working, the determination, and hopefully the quality will continue to come. But we play a way that we believe is entertaining and now we’ve just got to shore some things up in front of goal.”