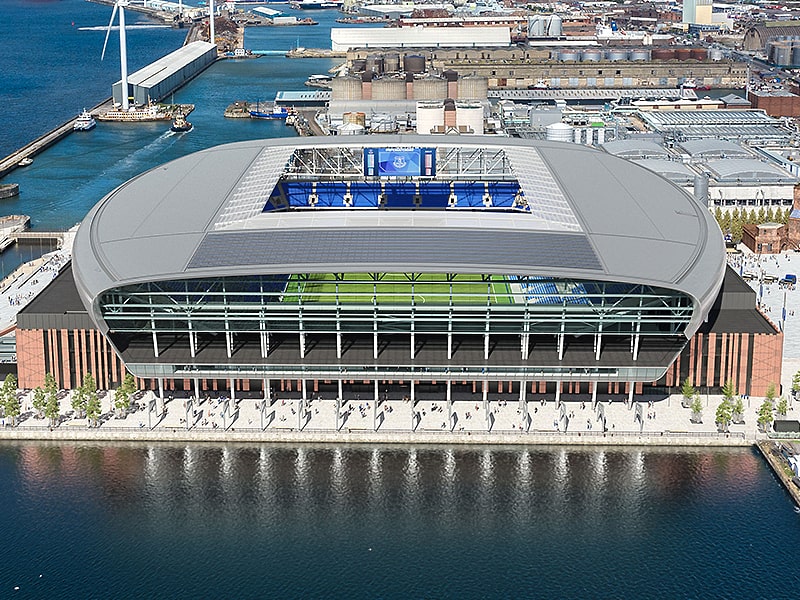 The multinational construction company Laing O’Rourke and the Premier League team Everton F.C. (UK) have signed a construction agreement that will see the contractor deliver the remainder of the football club’s new stadium at Bramley-Moore Dock.

The ‘New Civil Engineer’ stated that the contractor has already managed the project to this point, having undertaken the piling, the dredging and infilling of the dock basin and, in February, it started casting the concrete segments that will form the stadium’s superstructure.

The Everton Football Club is an English professional association football club based in Liverpool that currently competes in the Premier League, the top tier of English football.

The Goodison Park is a football stadium in the Walton area of Liverpool, England (UK). It has been the home stadium of Premier League club Everton F.C. since its completion in 1892. Located in a residential area two miles North of Liverpool City Centre, it has an all-seated capacity of 39,414.

The 52,888-capacity Bramley-Moore Dock Stadium is a proposed football stadium by Everton on the Bramley-Moore Dock in Vauxhall, Liverpool, England (UK). The dock itself was built in 1848. The stadium is proposed to be opened in time for the start of the 2023-2024 Premier League seasons, replacing the top-flight’s present residence – Goodison Park.

The ‘New Civil Engineer’ further stated that the new agreement will see Laing O’Rourke complete the construction of the 52,888-capacity waterfront stadium, giving Everton greater certainty about the cost of the remaining work.

Laing O’Rourke will now complete any outstanding enabling works and carry out the full construction of the stadium including the public spaces. The contractor will also be responsible for remedial works to the Grade-II listed Hydraulic Tower, which it will bring back into public use as part of the fan plaza around the stadium.

Observed Everton F.C. Chief Executive Denise Barrett-Baxendale, “This is an important agreement at a crucial time for the club and the stadium project. Our agreement with Laing O’Rourke follows on from last year’s pre-contract services and enabling work agreements and brings clarity on the overall costs of our new stadium. We are now able to lock-in construction costs, while also benefiting from Laing O’ Rourke’s economies of scale in what is an ever-fluctuating marketplace.”

Added Barrett-Baxendale, “Mr Moshiri (Everton owner Farhad Moshiri) and the Board’s commitment to the project remains unwavering and we’ve been delighted by the progress so far. Our new agreement signifies that we have the utmost confidence in Laing O’Rourke, who is using the very best digital engineering expertise and industry-leading knowledge of modern construction methods to bring our stadium vision to life.”