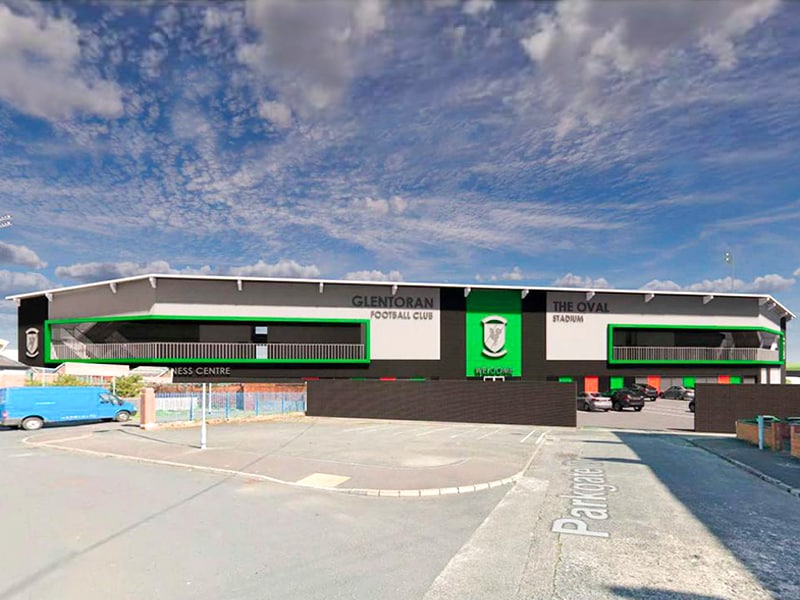 Football Club Glentoran F.C. owner Ali Pour and the Northern Ireland (NI) Executive are expected to collaborate to fund the long-awaited redevelopment of the club’s Oval stadium in a plan that could cost up to £10 million.

‘Belfast Telegraph’ stated that if designs of the new Oval come to fruition, the venue would make for a spectacular site to play football in East Belfast, Ireland.

Glentoran Football Club is a professional football club that plays in the NIFL Premiership. The club was founded in 1882.

The 26,556-capacity ‘The Oval’ is a football stadium in Belfast, Northern Ireland, which has been home to Glentoran F.C. since 1892. In 1941, the stadium was severely damaged by aerial bombings during the Belfast blitz of World War II, and was unusable until 1949. A new main stand was constructed in 1953.

The NIFL Premiership, known as the Danske Bank Premiership for sponsorship purposes, and colloquially as the Irish League or Irish Premiership, is a semi-professional association football league which operates as the highest division of the Northern Ireland Football League – the national league in Northern Ireland.

‘Belfast Telegraph’ further stated that a planning application has been submitted by the ‘Glens’ to the Belfast City Council on March 3rd, 2021 outlining the vision for the future. It states that the club plans to pull down the “existing spectator stand to be replaced with two new all-seater stands totaling 4,000 capacities”. It adds that there will be a “reconfiguration of existing standing terracing at goal ends providing 2,000-person capacity”.

There will also be room for additional car parking, improved circulation routes within the site and new turnstiles with ‘The Oval’ pitch set to become an artificial 3G surface.

The ‘Glens’ fans have been made a lot of false promises over the years as regards ‘The Oval’ redevelopment or moving the stadium to elsewhere in the East of the City. However, owner Pour and his consortium that took over the club and included Manager Mick McDermott and coach Paul Millar, are firm to go ahead with ‘The Oval’ revamp plans this time.

British-Iranian businessman Pour took over the reins of the Oval outfit in the middle of 2019 and by early 2020, the ‘Glens’ were debt-free. Before Pour took over the charge of the club, the club was up to their necks in debt (£2 million) and it was being feared that the club would have to shut shop.

There has also been substantial investment on the pitch with high-profile players brought to the club helping them to Irish Cup glory and Europa League qualification last season and a title challenge this campaign.

While the ‘Glens’ are determined to win the Irish Premiership, another mission before it is to make ‘The Oval’ a futuristic facility in the next couple of years.

To ensure their ambitious plans are passed by the Council, Glentoran will have to undergo a consultation process where they will be required to speak with householders, businesses and churches in the neighboring area, the George Best City Airport which is close by, Translink due to the railway track being nearby, the Department for Infrastructure, other relevant Government departments and bodies as well as supporters.

The entire consultation process exercise can take nine months to a year though it will depend on how smooth they are. On that score sources suggest no issues which could come in the way of the project are expected.

The biggest factor – of course – will be who will pick up the tab and that’s where public money will come into play. Earlier, a Government consultation had recommended Glentoran receive an investment of £10 million to upgrade ‘The Oval’ as part of the sub-regional stadia program. That was several years back. Much water has flowed under the bridge since then.

The £10 million for the Oval was part of a £36.2 million Government package dating back to 2015. Sports Minister Deirdre Hargey said last year that there was no guarantee the finance would go to the original designated areas insisting that she wanted to make sure “it is going to the right places”.

Just last month, DUP MP for Belfast East Gavin Robinson called on the Sinn Fein Minister to engage with Glentoran about the issue and to treat the matter with “urgency”.

However, now it will be expected that the ‘Glens’ infuse capital into the whole residence repurposing project on their own to buttress any Government funding that may come their way.

‘Belfast Live’ stated that ‘Glens’ boss Mick McDermott recently said much of the club’s progress depended on quality facilities at ‘The Oval’ – “We’re trying to build a team and a club. There are things that have to be done. People think that you build a football team just by buying players and coaching them, and that being full-time is just giving players more money and you train five days a week.”

‘Belfast Live’ further quoted McDermott as stating, “No, there are a lot of structures that need to be put in place to support a full-time environment. What about your support staff, physios, doctors, kit men and assistant coaches? Part of that structure of building a club for the future is facilities. We know that Glentoran, as well as other clubs in the Irish League, are a Third World country when it comes to football facilities.”

He added, “Our plans for the future for Glentoran are to strengthen not only the football team and the squad, but also the facilities available, to take this club into the future. I have no doubt that if and when the plans come to fruition that they will make a big step forward for Glentoran Football Club.”

‘Glen’ fans are still dreaming to see their sporting heroes play in a chic arena with ‘The Oval’ boasting stellar facilities.