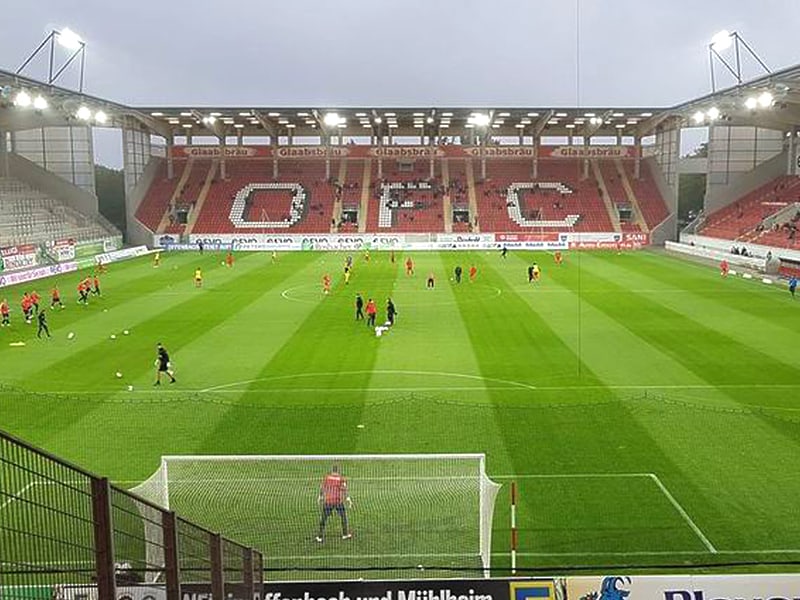 The Sparda-Bank-Hessen-Stadion in Offenbach, Germany, got back its old traditional name – Stadion am Bieberer Berg – in 2021 and this name will at least continue for the whole of 2022. Since February 4th, 2022, updated signage with the stadium’s original name and name of all sponsors has been hanging outside and at all corners of the stadium.

The Stadion am Bieberer Berg was pulled down in the year 2011 and in its place came up the Sparda-Bank-Hessen-Stadion.

The ‘Radio Primavera’ stated that five Offenbach companies – Sparkasse Offenbach, Energieversorgung Offenbach (EVO), Stadtwerke Offenbach, the non-profit construction company Offenbach (GBO), and the Stadiongesellschaft Bieberer Berg mbH 2021 – collected funds to be able to give back the old name of the venue. Helping these companies in their above endeavor was ZWO Zweckverband Wasserversorgung Stadt- und Kreis Offenbach and the Offenbach-Post media group.

The Stadion am Bieberer Berg was a multipurpose stadium in Offenbach am Main, Germany. The stadium was built in 1921 and held 26,500 people. Situated between Offenbach and the Village Bieber, it was the home of the German association football club Kickers Offenbach. The stadium was replaced by the 20,500-capacity Sparda-Bank-Hessen-Stadion.

The Stadion am Bieberer Berg in Offenbach am Main opened in the year 1921 and the stadium survived for over 80 years. It was built as a single wooden stand and was refurbished several times over this 80-year period – in 1952, 1956, 1960, 1968, and 1973. Gradually, the stadium was equipped with new stands and floodlights.

The facility underwent extensive remodeling later during the ’90s too and the last spruce-up work was carried out in the year 2005. The stadium served as the residence of the German association football club Kickers Offenbach who later felt that the arena left much to be desired despite numerous revamp work done. Soon, the Kickers decided that the stadium will have to demolished and a new one built in its place and in early 2011, the Stadion am Bieberer Berg was finally torn down to make way for the Sparda-Bank-Hessen-Stadion.

The 20,500-capacity Sparda Bank Hessen Stadium Bieberer Berg is a stadium in Offenbach am Main, Germany. It became the new home of Kickers Offenbach, when it replaced the club’s former home Stadion am Bieberer Berg.

Kickers Offenbach is a German association football club in Offenbach am Main, Hesse (Germany). The club was founded on May 27th, 1901 in the Rheinischer Hof restaurant by footballers who had left established local clubs including Melitia, Teutonia, Viktoria, Germania, and Neptun.

The ‘Radio Primavera’ further stated that the above companies under the mission – ‘We Love Offenbach’ – retained the original name of the facility – ‘Stadion am Bieberer Berg’ – last year. This came as a celebratory moment as well as a huge gift for the fans of the club – Kickers Offenbach.

Stated the Mayor and Chairman of the Supervisory Board of Stadiongesellschaft Bieberer Berg mbH, Dr. Felix Schwenke, “The Stadion am Bieberer Berg is the soul of the City (Offenbach). Maybe when the COVID-19 curse finally ends, the stadium may again get a new name but for the year 2022, the five Offenbach-affiliated companies have succeeded in giving the stadium its grand old name back.”

Echoing Schwenke’s view, Roland Walter, Deputy Chairman of the Supervisory Board of the stadium company, stated, “For the people of Offenbach, the name Stadion am Bieberer Berg is their identity and big Offenbach companies bending over backwards to retain the stadium’s original name holds testimony to it.”

Maintained Ulrich Kaßburg, CEO, Sparkasse Offenbach, “We are very happy to have played our part in retaining the old traditional name of the stadium which is the home of German football history. We are pleased that this tradition is once again getting reflected in the stadium’s name.”

Remarked Dr. Christoph Meier, CEO of EVO, “We have witnessed the most passionate moments of die-hard Kickers Offenbach fans in nail-biting matches played in the stadium. These emotions and energy are all an intrinsic part of Offenbach’s history.”

Stadtwerke Offenbach boss Peter Walther observed that the “Past two years have not been easy for football fans the world over with the pandemic ripping apart the globe and soccer matches played mostly sans fans for almost two years. But, the virulent virus cannot take away the emotions of the fans and the sentiments that are associated with the Stadion am Bieberer Berg name.”

The head honchos of the five companies opined that the stadium is like a “second home” to them for which it had become imperative that they retain the old traditional name of the venue.

Kickers Offenbach President Joachim Wagner was delighted that the stadium was able to get back its old traditional name at least for the year 2022 and stated, “This whole development will give enough reasons for the club’s fans to celebrate. The name ‘Stadion am Bieberer Berg’ is engraved in Offenbach’s football history.”

Who says ‘What’s in a name?’ In fact, a name can be the soul and identity of a community or of a City as the Offenbach Stadium episode establishes.