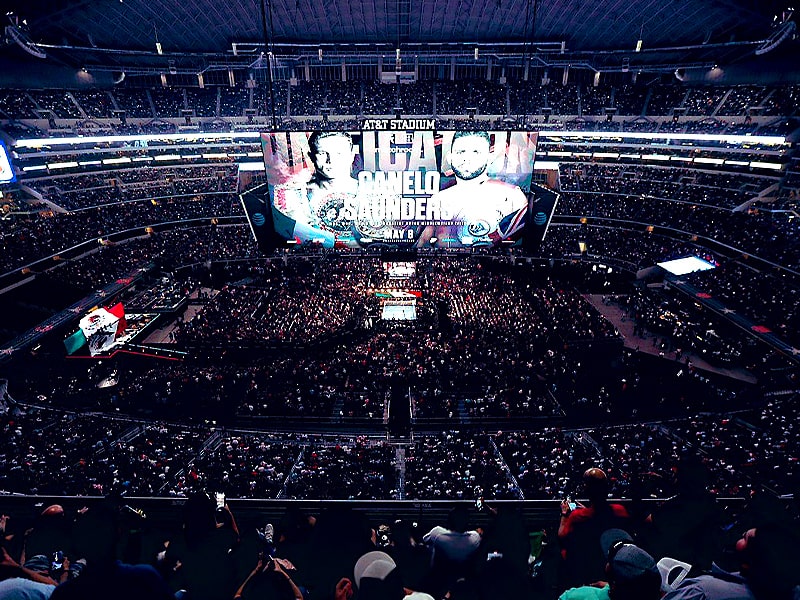 ‘yahoo!sports’ stated that so huge was the crowd, in fact, that the fight set a US indoor boxing attendance record – even though the COVID-19 danger is not totally gone from the United States!

The 80,000-capacity AT&T Stadium, formerly Cowboys Stadium, is a retractable roof stadium in Arlington, Texas, United States. It serves as the home of the Dallas Cowboys of the National Football League (NFL) and was completed on May 27th, 2009. It is also the home of the Cotton Bowl Classic and the Big 12 Championship Game.

The Cotton Bowl Classic, also simply known as the Cotton Bowl, is an American college football bowl game that has been held annually in the Dallas-Fort Worth metroplex since January 1st, 1937. The game was originally played at its namesake stadium in Dallas before moving to AT&T Stadium in nearby Arlington (US) in 2010.

The Big 12 Championship Game is a college football game held by the Big 12 Conference between the best and the second best Big 12 team. The game was played each year since the Conference’s formation in 1996 until 2010 and returned during the 2017 season.

‘yahoo!sports’ further stated that more than 73,000 fans attended the fight at the Dallas Cowboys’ stadium in Arlington, Texas, breaking the previous record set at boxing great Muhammad Ali fight in 1978 by nearly 10,000 people.

This isn’t the first event in recent weeks to open up to fans like normal in the US since coronavirus infections have come down with the vaccine rollout. The mixed martial arts event UFC 261 (produced by the Ultimate Fighting Championship) on April 24th was a total sellout which was held at the 15,000-capacity VyStar Veterans Memorial Arena in Jacksonville, Florida (US). The tickets sold like hot cakes. The 15,000 fans that purchased tickets, however, were met with a very stark warning that attending could lead to “death” or other “permanent damage” from COVID-19.

The United States averaged more than 42,000 new cases on May 8th and about 45 percent of Americans have received at least one shot of a COVID-19 vaccine.

While the fatal virus case numbers are significantly down from there they were at their worst back in January, the pandemic is clearly not over and not even half of the country is vaccinated yet. And videos and photos of the bout showed that social distancing protocols and mask wearing had gone for a toss.

In the adrenaline rush bout, Alvarez beat Saunders after an uppercut in the eighth round hit Saunders right in the eye – something that ended the fight and sent Saunders to a local hospital as a precaution.

« Previous News: NFL matchups to be back in London this year
» Next News: ‘The O’s’ unique ideas to hold in good stead