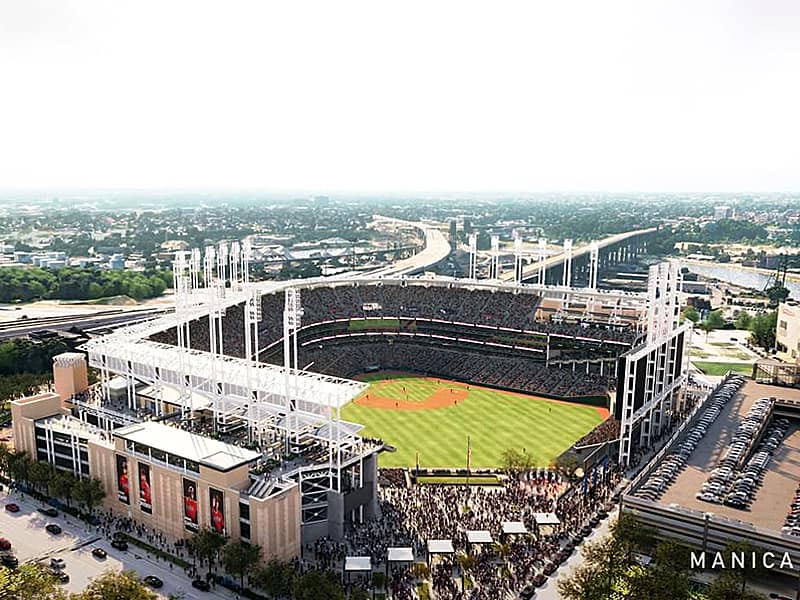 Back as a World Series title contender, the Major League Baseball (MLB) team Cleveland Guardians is moving forward with upgrades to their digs – the Progressive Field in Cleveland, Ohio (US).

‘AP’ stated that the team revealed recently delayed final plans for a “reimagining” of its downtown home, which has aged well since opening in 1994 but is now the 11th oldest ballpark in Major League Baseball (MLB).

The Cleveland Guardians are an American professional baseball team based in Cleveland, US. The Guardians compete in Major League Baseball (MLB) as a member club of the American League Central division. Since 1994, they have played at Progressive Field.

The 35,041-capacity Progressive Field is a Major League Baseball (MLB) park located in the downtown area of Cleveland, Ohio, United States. It is the home field of the Cleveland Guardians.

New York (US)-based Major League Baseball (MLB) is a professional baseball organization and the oldest major professional sports league in the world. The MLB is composed of 30 total teams, divided equally between the National League and the American League, with 29 in the United States and 1 in Canada.

‘AP’ further stated that the Guardians have earmarked more than $200 million to remodel the upper deck, clubhouses and other areas over the next three years. The funds are part of an overall $435 million renovation project included in a new lease agreement the team signed last year through 2036.

The renovations will be done in stages and the Guardians intend to have them done by the 2025 season opener.

The ballpark’s new look will not include a sportsbook or space devoted for gambling, which became legal in Ohio on January 1st. The Guardians’ next-door neighbors, the National Basketball Association (NBA) team Cleveland Cavaliers, opened a sportsbook inside their residence – the 19,432-capacity Rocket Mortgage FieldHouse recently.

MLB rules currently prohibit gambling spaces within the confines of a team’s ballpark.

Informed Brian Barren, the club’s President of Business Operations, “We’re in the process of working through what a retail sports (gaming) option might look like here at Progressive Field as we speak.”

Recently, the Guardians announced a multiyear partnership with the British online gambling company bet365 to be the team’s exclusive mobile sports betting partner, but Barren said the timing was just a coincidence with the renovations being announced.

While there have been substantial renovations in the past at the ballpark, most recently before the 2016 season, the clubhouses have not been touched since they opened 28 years ago.

Chris Antonetti, Guardians President of Baseball Operations, said the clubhouse refurbishment to training areas, kitchen facilities and other elements is long overdue and will allow the team to compete at the highest level.

Maintained Antonetti, “I’m hopeful that when our players and staff walk into the new facility they will feel excited and energized about the additional resources they have to help fuel their success as individuals and as a team.”

Antonetti said the Guardians decided not to switch the home dugout from the third- to first-base side after considering the move.

Based on favorable feedback the team received after its most recent remodel, the Guardians will create more social spaces inside the ballpark to cater to fans looking for an experience beyond watching the game.