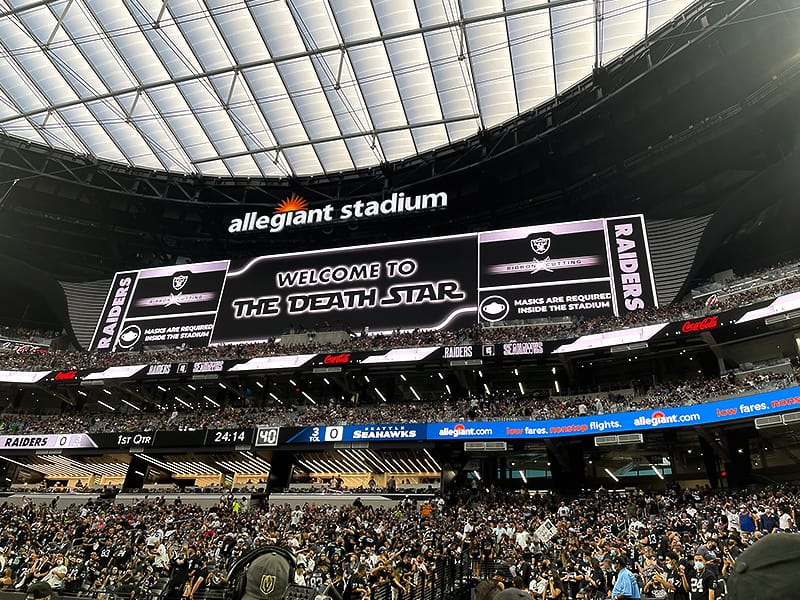 The National Football League (NFL) team Las Vegas Raiders’ preseason kickoff at Allegiant Stadium (US) on August 14th where for the first time, the Raider Nation was allowed inside the spiffy stadium against the match against their peer team Seattle Seahawks. The Raiders won the pre-season opener 20-7 over Seahawks.

The 65,000-capacity Allegiant Stadium is a domed stadium located in Paradise, Nevada, United States. It serves as the home stadium for the Las Vegas Raiders of the National Football League and the University of Nevada, Las Vegas Rebels college football team.

The 2021 National Football League (NFL) regular season will begin on September 9th and will end on January 9th, 2022.

The ‘8News Now’ stated that but with the addition of fans, many worried about the dreaded parking issues Allegiant Stadium has seen in the past. Few fans were satisfied with the parking arrangement, but there were a section of fans who were hugely disappointed with the same.

Said Raiders fan, Patricia Crown, “I got a season pass for parking. I had to pay for it, but I am in Lot X, so I just have to walk a little way, so it’s really good for me.”

From $60 to $80, there were several lots taking advantage of the fans that didn’t buy parking passes with their tickets. Most fans were just happy to be going to the game in person like Las Vegas resident, Marvin Preston – “Parking is a little bit further out, but it wasn’t bad and $50 bucks and maybe a mile and half away. We are Raider fans, that aren’t going to stop us!”

Other than Marvin most fans shared that parking was available, but it just cost more than they would have liked.

The ‘8News Now’ further stated that the Raiders played in front of a home crowd for the first time since relocating from Oakland. It had a crowd in just three road games last season and went 2-6 inside its empty 65,000-seat Allegiant Stadium with fans barred due to the COVID-19 pandemic which tore the United States apart.

With a mask mandate in place for the preseason opener, Raiders owner Mark Davis wouldn’t commit to requiring fans to provide proof of COVID-19 vaccination or a negative test when the Raiders open the regular season on September 13th against their peer team Baltimore Ravens.

He maintained, “Health and safety will always be No. 1. The masks mandate is a good idea. I don’t know how you can actually police it. If 100 percent of people are wearing masks, then we’re on to something. If not, we might have to take a little tougher approach. What we don’t want is to get back to (limited) attendance capacities. We want to be full capacity at all times.”