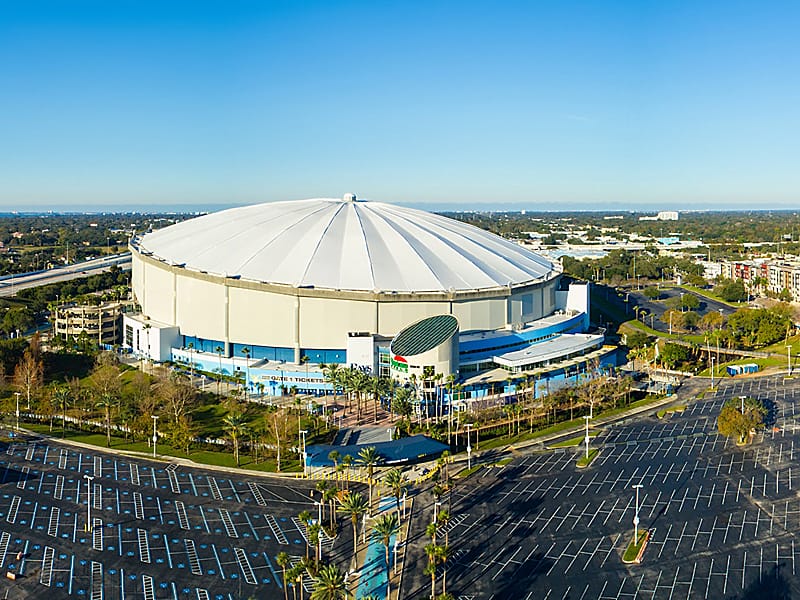 The City of St. Petersburg in Florida (US) has unbolted proposals from seven development groups for the repurposing of the Tropicana Field site. However, the local officials and the baseball team Tampa Bay Rays are reportedly at odds over the potential inclusion of a new Major League Baseball (MLB) stadium in the plans.

Tropicana Field, also commonly known as The Trop, is a domed stadium located in St. Petersburg, Florida, United States, that has been the home of the Tampa Bay Rays of Major League Baseball (MLB) since the team’s inaugural season in 1998.

The Tampa Bay Rays are an American professional baseball team based in St. Petersburg, Florida. The Rays compete in MLB as a member club of the American League East division. Since its inception, the team’s home venue has been Tropicana Field.

Major League Baseball (MLB) is an American professional baseball organization and the oldest of the major professional sports leagues in the United States and Canada. A total of 30 teams play in MLB: 15 teams in the National League and 15 in the American League.

In July, the City launched a request for proposal (RFP) process for the Tropicana Field site, urging potential applications to be open to the idea as regards whether the land will ultimately host an MLB stadium.

Tropicana Field is presently the home ballpark of the Rays, but the MLB club’s long-term future at the stadium is shrouded in uncertainty. The RFP for the 86-acre stadium site outlined the City’s guiding principles for the project and how it envisioned its next new neighborhood. The City asked prospective applicants to enter two proposals, one including a stadium and another without.

On January 26th, the City shortlisted seven applications from nine bids that were entered. Full details of the proposals, comprising visions for the site’s residential, commercial and recreational future comes to more than $3bn (£2.19bn/€2.48bn) for certain projects.

However, media reports stated that the Rays’ involvement in the scheme is at risk over disputes as to the reins would be in whose hands in context with the site’s reimagining and subsequent revenues, along with the team’s focus on targeting a novel strategy that would see it split its season between St. Petersburg and Montreal, Canada.

St. Petersburg Mayor Rick Kriseman told mediapersons, “I want the Rays to remain in St. Petersburg and I’m willing to work with them to make it happen. But, I’m not giving the City away.”

The Rays’ current lease deal at Tropicana Field expires in 2027. As per the present agreement, the Rays are entitled to 50 percent of the revenue of any development on that land before 2028, regardless of whether a stadium is included.

Kriseman said the Rays are seeking control of 50 acres East of Booker Creek, with total control of the development rights for that portion of the parcel. The team would still be entitled to 50 percent of the development rights on the rest of the property. The team would reportedly still seek funding from Pinellas County and other public funding sources to pay for construction of the venue.

Rays’ owner Stu Sternberg claims Mayor Kriseman’s characterization of the team’s “demands” is inaccurate – “This doesn’t get done unless the county, the City – which means the Mayor, the Council, business people – get together and pull together. That’s the idea, that we want to be on the same side of the table, as opposed to negotiating, ‘What do we get, what do you get.’”

Questioned Sternberg, “There’s no way this stadium gets built without funds coming out of our pocket. And if it’s too much funding, it doesn’t get built. So how do we get to a point where you’re comfortable and I’m comfortable and what’s good for the City and everybody involved getting a stadium done?”

In February 2020, the Rays said a “meaningful step” had been taken towards securing the future of the team in the region, as a deadline was set for an agreement on the ingenious proposal that would see the franchise split its season with Montreal.

The Rays met with officials from the City of Tampa and Hillsborough County, with the ‘Sister City’ concept on the agenda. In June 2019, MLB gave the nod for the Rays to pursue the option of splitting its season between Florida and Montreal, amid the franchise’s ongoing stadium issues.

The Rays are said to have business partners with initial plans to build an arena with private funds in Montreal, but games cannot be played before the 2028 season with the Canadian group not committing to the stadium plan until it has a firm contract with the Rays.