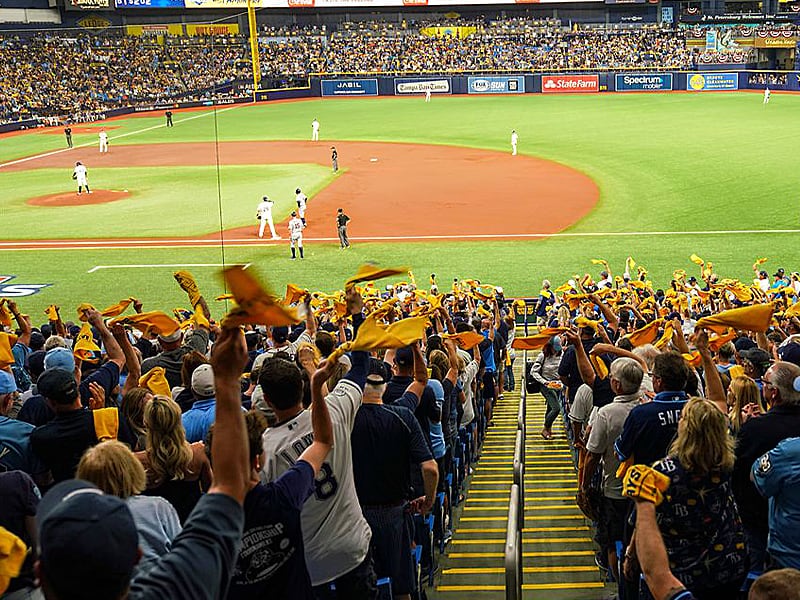 Limited number of fans will be allowed at Tropicana Field (US) for the American professional baseball team Tampa Bay Rays’ 2021 season. For each game, the seating capacity will be limited to around 7,000 and the fans will have to maintain physical distancing from other groups by sitting in small pods. As per Major League Baseball (MLB) rules, wearing of face coverings have been made a ‘must-must’.

The Tampa Bay Rays are an American professional baseball team based in St. Petersburg, Florida. The Rays compete in Major League Baseball (MLB) as a member club of the American League (AL) East division.

Tropicana Field, also commonly known as ‘The Trop’, is a domed stadium located in St. Petersburg, Florida, United States, that has been the home of the Tampa Bay Rays of MLB since the team’s inaugural season in 1998.

As the United States is still being clobbered by COVID-19, the above plan will be subject to change depending on the coronavirus situation in the Tampa Bay area and the State of Florida.

The Rays are keeping fingers crossed as to the COVID-19 situation getting conducive by April – and hopes that the vaccines will become more available and cases will go down. If everything works in the Rays’ favor, they can increase the venue capacity as the season rolls on. If such a situation arises that the coronavirus menace continues, the above plan could get derailed or delayed. Nod will be required from the MLB and Government authorities.

Team President Matt Silverman stated, “We know that how we start the season and how we end will be dramatically different. In all cases, we will keep health as a top priority.”

A lot of details are still being formulated, though team officials were working off a plan they hoped to use to allow fans for the 2020
late-season and postseason games. However, the MLB nixed the same, and after the opening round of the playoffs, settled for neutral-site games.

A portion of the Trop’s upper deck will, in all likelihood, be reopened to increase the stadium capacity and make use of the available space. Changes in concession services will be made to facilitate social distancing. The issues still to be discussed are – will plexiglass barriers be set up, how many seats will be there in a pod and how close to the field fans will be able to sit.

By mid-February, it is expected that information on tickets will be made available. Top priority will be accorded to season ticket holders. Since the end of the last season, the Rays have been accepting deposits for season ticket plans.

On April 9th, 2021, the Rays are supposed to open their home schedule against the MLB team New York Yankees. Spring training for MLB teams will start in mid-February and they will play a full 162-game schedule.

As per MLB guidelines, teams will not have to produce negative coronavirus tests, proof of vaccines and nor will temperature checks be done. Neither is the Rays planning to do so. However, wearing of masks has been made mandatory for supporters, except when they are eating or drinking, or they have a health issue.

The abridged 2020 season was played by the Rays sans fans, just like the other 29 teams. This led to huge fiscal losses and the Principal Owner of Tampa Bay Rays revealed before the ‘Tampa Bay Times’ that it amounted to “a number I wouldn’t have imagined to lose in a baseball season”.

For the National League Championship Series and World Series at Globe Life Field in Arlington, Texas, limited fans’ attendance was permitted by the MLB under a distanced-pods plan.

The Rays are still not sure whether spectators will be allowed to grace Spring games which are set to start on February 27th in Port Charlotte (Florida), or for workouts, which are slated to begin on February 18th.

Limited fans were allowed into the Al Lang Stadium (Florida) fold by the Tampa Bay Rowdies soccer team, also owned by the Rays, after play resumed in July last year.

In other news, the Tampa Bay Lightning of the National Hockey League (NHL) earlier announced that fans in restricted numbers will be allowed at their residence Amalie Arena (in Tampa Bay, Florida) for the start of their season but later backtracked as COVID-19 cases registered a huge rise locally. After opening their season at Amalie Arena with limited onlookers, the National Basketball Association’s (NBA) Toronto Raptors are also now playing without fans in attendance.