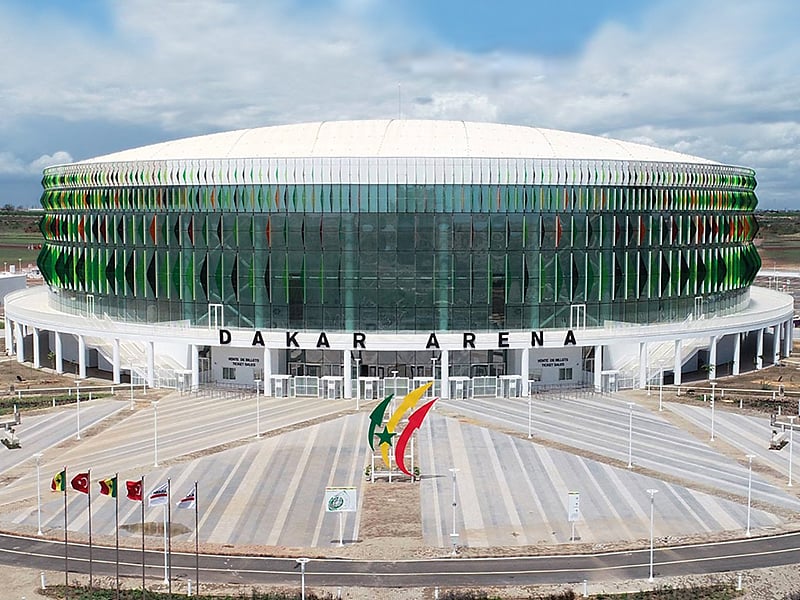 The Government of Senegal launched the construction of a new 50,000-capacity stadium at Diamniadio – a City in the West African country – in February 2020 – the Diamniadio Olympic Stadium. Though the plan back then was to make the facility operational in 17 months’ time, but that did not happen with coronavirus playing the spoilsport.

‘SOGIP’ stated that with COVID-19 outbreak causing significant delays to the project, the completion date now has been postponed to 2022. As of June 11th, 2021 more than 55 percent of the stadium construction work has been completed.

When construction started, the damage was XOF 155 billion (€238 million). A contract was inked in London with Standard Chartered by representatives of the Senegalese Government. The onus of paying back lies with the Senegalese taxpayers.

The venue is all set to be the main arena for the 2026 Youth Olympic Games which will be held in Dakar, Senegal.

The Diamniadio Olympic Stadium will be a multipurpose stadium which will be able to host football, rugby and athletics. The under-construction stadium will sit in Diamniadio (a newly established City) in Dakar, Senegal and will be surrounded by huge amount of verdant space. It will serve as the residence of the Senegal national football team. The stadium will have a capacity of 50,000 and is being built by the Turkish construction firm – Summa Construction Company – and the design has been lent by the Turkish studio Tabanlıoğlu Architects.

The Senegal national football team – nicknamed ‘the Lions of Teranga’ – represents Senegal in men’s international football. Controlled by the Senegalese Football Federation, it is a member of both FIFA and the Confederation of African Football (CAF).

The Confederation of African Football or CAF is the administrative and controlling body for African association football. CAF represents the national football associations of Africa, runs continental, national and club competitions, and controls the prize money, regulations and media rights to those competitions. It is headquartered in 6th of October City, Egypt.

The ‘SOGP’ further stated that it was on August 8th, 2018, during the inauguration of the 15,000-capacity Dakar Arena, that the President of Senegal, Macky Sall, addressing all Senegalese, made the commitment to initiate the construction of a stadium in the heart of the urban center of Diamniadio.

The promise was kept and without any publicity blitzkrieg, the construction work of the majestic stadium is going on in West Africa. This best demonstrates President Sall’s keen interest in the development of sports as well as sporting facilities per se as it spurs growth and social cohesion.

In Senegal, sport forms an intrinsic part of the people’s identity and football is a collective passion. The under-construction venue, when completed, will come as the greatest gift for the sports-loving people of the Western African country. The stadium will boast state of the art infrastructure and the visitors will be able to savor premium facilities.

The Diamniadio Olympic Stadium will stand tall as the pride of the nation.

The stadium will be housed very near to Senegal’s capital – Dakar – just a 30-minute drive away and will be shouting distance away from the Blaise Diagne International Airport which sits in Ndiass, Senegal, and will be directly served by the motorway and the Regional Express Train.

Once the stadium is completed, it will sit adjacent to the Dakar Arena, thus transforming the new town of Diamniadio as a unique sports center in the sub-region.

The entire stadium construction work has been entrusted to SOGIP, which manages public infrastructure work in Senegal. This futuristic building, which meets the most demanding technological and environmental standards, will be high on the sustainability factor and will meet the ‘Green Goal’ criteria laid down by FIFA. The venue will offer matchless hospitality facilities and will follow the safety first policy – an element which has come to the fore in a post-COVID world. Starting from the huge parking space and the landscaped area to the futuristic turnstile ticketing system to the spacious lounges which would offer total luxe – the venue is all set to swoon fans.

The arena will enjoy a space devoted to physically challenged guests and will go on to become the most happening place for supporters, athletes and amateurs who will meet and greet each other in this area and talk about their common passion – sports. A lot of attention to details has been given to the reception area reserved for the players, referees and sports functionaries. A warm-up space will also come up for the players to facilitate them to show their prowess on the pitch.

The Diamniadio Olympic Stadium will surely prove to be the springboard to success for the players and athletes of Senegal and sportsmen will definitely swear by this venue.