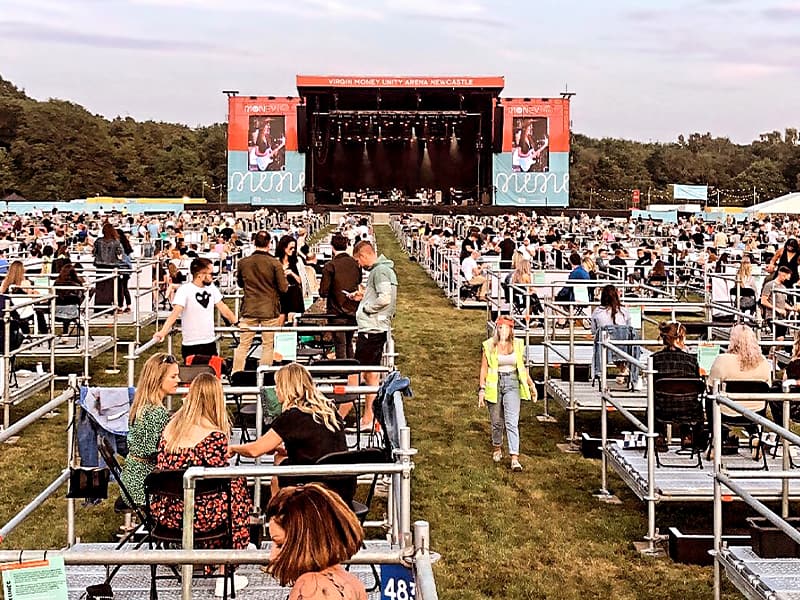 The first official ‘socially distanced’ venue to open in the UK – since the deadly COVID-19 broke out – held its first concert recently, with 2,500 fans gathering on 500 separate elevated platforms placed on a racing track field.

It was sold-out shows at Virgin Money Unity Arena, UK’s first socially distanced arena, a pop-up amphitheater on the grounds of Gosforth Park in Newcastle upon Tyne, England. Each of the pens fitted in a maximum of five people each and was spaced out two meters apart. English singer, songwriter, musician, and actor Sam Fender hogged the limelight at the first of the two huge hit shows.

Patrons were told to wear face covers and not intermingle between sections, and people totally complied with wide open spaces between the individual areas.

Fender told mediapersons before the show began, “I will miss the mosh pits, but they will come. They’ll eventually come back when we’re allowed to do it again. … I think it’s fantastic that our region is going to lead the way on this, and we’ll be the trailblazers for something that will hopefully continue on through the rest of the pandemic. … It’s not going to be the same as a gig you would normally have, but we’ve got to do what we can do.”

Fender topped the UK charts with his debut album in 2018 and the Brits Critics’ Choice Award.

Other gigs at the makeshift venue have been lined up with Northern Irish singer-songwriter Van Morrison, English rock band Maximo Park and comedians Jimmy Carr and Bill Bailey.

The shows were hosted by SSD Concerts. Steve Davis of SSD Concerts said the platforms all offered “a great view of the stage”. Walking traffic to and from the washrooms was marked as one-way to avoid congestion or paths crossing, and food and beverages were ordered remotely and delivered to the platforms.

Green with envy American music fans actually helped the Hollywood Bowl to trend in the wake of news about the UK show, as few drew a comparison of the platforms set up in Newcastle to the boxed seats at the Bowl.

The Hollywood Bowl is an amphitheater in the Hollywood Hills neighborhood of Los Angeles, California (US).

Even if Los Angeles allowed selling only every-other-box at the Bowl to maintain social distancing, and then leaving the bench seats fallow would probably not allow for cost-effective productions.

The UK gig was akin to what has been happening in America at select drive-in concerts… but sans the cars. Ironically, UK which had put a check on US-style drive-in concerts due to the unprecedented health crisis emerging due to COVID-19 outbreak, itself went in for an all-pedestrians concert happening with social distancing guidelines enforced.

In mid-July, UK greenlighted outdoor concerts with the proviso that strict guidelines will have to be followed, only to have Live Nation soon thereafter cancel a series of drive-in shows that were scheduled for July through September featuring artistes like English indie rock band Kaiser Chiefs, English singer Gary Numan, British rapper Dizzee Rascal and the rock band from Scotland LaFontaines. The promoter cited “localized lockdowns” as a reason for calling off the Live at the Drive-In series at the time.

In the US, drive-in shows have been limited but largely successful in their own rights – although a benefit show by the American electronic duo Chainsmokers in the Hamptons in New York (US), where fans were also supposed to stay in marked areas around their cars, drew negative publicity when photos and video were published of fans dancing near the front of the stage. Other shows, including a series of drive-in gigs by American singer-songwriter Brad Paisley, American country music singer Jon Pardi and American rapper Nelly in the parking lots of Live Nation-owned venues, have gone off seemingly without any hiccups. Several country and Christian acts have done mini-tours at actual drive-in theaters in the Midwest and South.