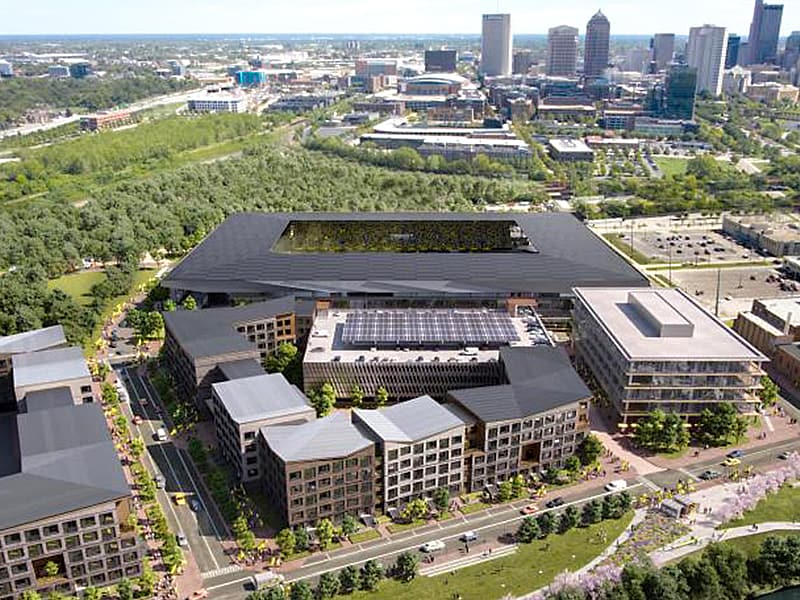 The Pizzuti Companies and Haslam Sports Group (majority investors in the ownership group of the MLS team Columbus Crew SC) recently released new details as regards the mixed-use neighborhood which sits next to the New Crew Stadium in downtown Columbus in Ohio, US.

Columbus Crew Soccer Club is an American professional soccer club based in Columbus, Ohio (US). The Crew competes in Major League Soccer (MLS) as a member of the league’s Eastern Conference and began play in 1996 as one of the 10 charter clubs of the League.

The New Columbus Crew Stadium is a soccer-specific stadium under construction in Columbus, Ohio, United States. It will primarily serve as the new home stadium of the Columbus Crew SC of Major League Soccer (MLS), replacing the club’s previous home, Mapfre Stadium. The new stadium will cost $300 million and will be located at the center of the Confluence Village development, including residential and commercial buildings. It will seat 20,000 spectators and include 30 suites and 1,900 club seats. The stadium is expected to be completed in July 2021.

Headquartered in Columbus, Ohio (US) and with offices in Chicago and Nashville, The Pizzuti Companies forte lies in real estate development, marketing and management.

‘Columbus Crew SC’ quoted Joel S. Pizzuti, President and Chief Operating Officer (COO) of The Pizzuti Companies as stating, “We are committed to designing and programing a walkable neighborhood that not only adds to the vibrancy of the community, but provides opportunities for people to gather, live with art, enjoy outdoor activities, and experience one of the nation’s most dynamic, world-class soccer stadiums.”

Astor Park sets a new standard for work, life, and leisure, and is conveniently positioned and a stone’s throw away from many of Columbus’ great neighborhoods, including Grandview, Franklinton, the Arena District, the core of downtown, the Short North, Upper Arlington, and The Ohio State University.

Remarked Dee Haslam, Chief Executive Officer (CEO), Haslam Sports Group, “We love how Astor Park is evolving and are excited for the Columbus community to experience the neighborhood in so many unique and exciting ways. We’re certainly thrilled that the New Crew Stadium within Astor Park points to the exciting future of Crew SC, Major League Soccer and the world-class City of Columbus. While the name Astor Park was derived from its historic soccer roots, we know the neighborhood itself will be vibrant and dynamic with great energy year-round from people working, living and enjoying the beautiful green space.”

Nestled in a previously untapped nook of downtown, Astor Park provides even further connectivity to surrounding communities via its two-acre public park and a new pedestrian bridge, presently under construction by the City of Columbus. Situated on the East bank of the Olentangy River, the park will connect Astor Park to the West side of the Olentangy River where visitors and locals will have direct access to the Olentangy Trail and the Central Ohio Greenway (COG) network. Due to its accessibility, this access point is positioned to be one of the region’s most utilized access points in the COG network.

With a name derived from the birthplace of American soccer, Astor Park pays homage to the location where the game was officially made a national sport. Founded in New York City in what was the time’s most noteworthy hotel – Astor House – where, in April 1913, Thomas Cahill founded the United States Football Association, which later became the United States Soccer Federation.

Development of Astor Park features the work of a versatile project team, including design architecture by Goettsch Partners, landscape architecture by MKSK and branding by Blackletter.

Pizzuti, Haslam Sports Group and their development team have released new contextual renderings of the neighborhood, which highlights the stadium, office and residential components, a public parking garage, and the riverfront park. Scheduled to open in July 2021, the stadium is slated to host soccer, entertainment and corporate events year-round. The second phase of construction within the neighborhood will bring to sharp focus the residential component and is expected to break ground in Q4 2021 with an estimated completion date of Q2 2023.