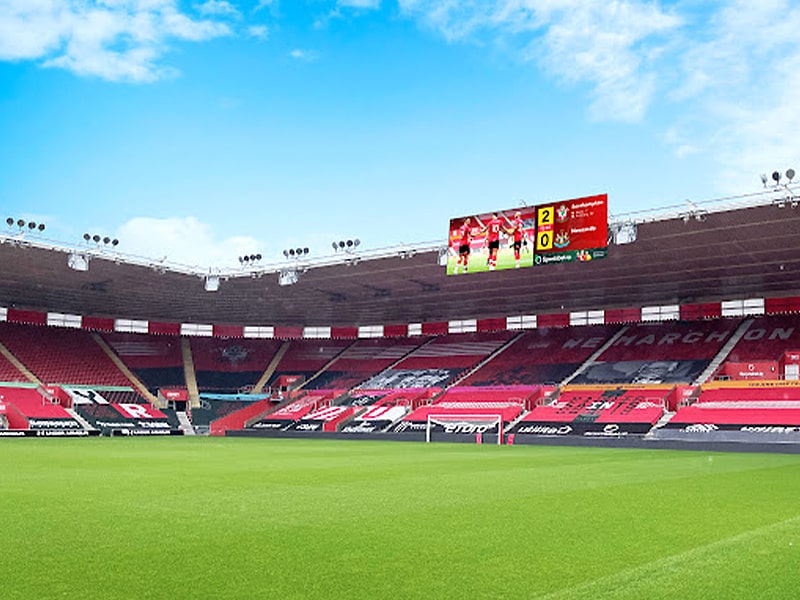 The ‘Southampton FC’ stated that the bumper range of improvements have been designed to help the club deliver a first-class supporter experience and coincide with the 20-year anniversary of the move to St Mary’s.

The Southampton Football Club is an English professional football club based in Southampton, Hampshire (UK), which plays in the Premier League, the top tier of English football.

The ‘Southampton FC’ further stated that the most notable of these improvements is the installation of brand new jumbo-sized big screens, double the size of the existing displays.

The new, state of the art models, which will be installed during the October international break, will provide more integration with the rest of the arena, meaning they can be linked to screens on the concourses, pitch-side boards, floodlights, and kiosks and even to the club’s official app, enabling the club to deliver a much more engaging matchday experience for its fans.

There are also wide-reaching improvements that supporters will notice in the heart of the stadium. These include new, larger TV screens on the concourse and two huge video walls in the Kingsland and Itchen stands to allow fans to enjoy all the pitch action from around the Premier League before and after each game of ‘The Saints’ supported by newly extended opening hours.

To help enhance the concourse experience even further there will be a full refurbishment of the kiosks with the installation of new point of sale (POS) technology and an increase in tillpoints by over 20 percent to help reduce queue times, as well as new digital signage throughout to help direct fans to less busy outlets.

Tillpoint is a cloud-based business management and electronic point of sale (EPOS) solution for retail stores, restaurants and the hospitality industry. Users can view out of stock inventory and create purchase orders to manage stock levels.

Following feedback from supporters, fans will also be able to take advantage of an all-new, locally sourced food and drink menu within the concourse, which for the first time will also include craft beers.

A significant amount of work is also being completed on refreshing the look and feel of the stadium, heavily focused on recognizing the history of the club and its rich heritage.

New signage and banners will be set up outside the stadium with updated artwork, whilst inside, a new Captains Wall will be installed in Main Reception recognizing those who have captained the club all the way back to 1885.

The honours board previously installed at The Dell, and currently outside the Markus Liebherr Lounge, will now be complemented with new boards sharing both the player and top goal scorers of the year as well as detailed profiles of the club Presidents.

Supporters who wish to combine their passion of the game with a top-tier hospitality experience will also be well catered for through this improvement program, with several hospitality lounge improvements across the stadium, along with the introduction of the previously announced Halo Lounge bringing an exclusive and prestigious top-floor pitch view offering to those looking to experience one of the best dining experiences on the South Coast.

Work on these improvements is already underway, with completion of the various different aspects being staggered throughout the next few months.

« Previous News: Stadium Australia larger than life screen!
» Next News: Bundesliga to greet up to 25,000 supporters