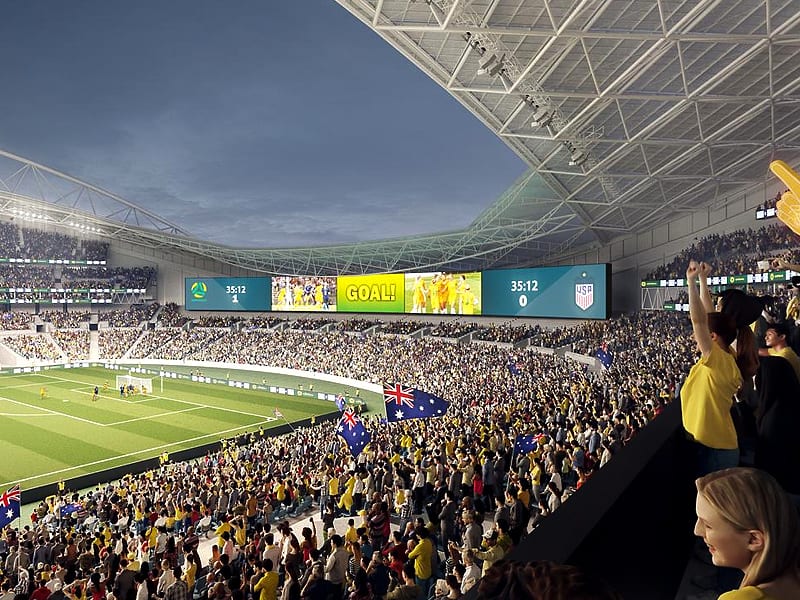 The event experience at Stadium Australia will be transformed by the installation of the world’s longest straight-run stadium video screen as part of more than $10 million of fan-focused digital upgrades throughout the facility.

‘Stadium Australia’ stated that work on the Great Southern Screen will commence after the NRL Grand Final Day (scheduled to be held at Stadium Australia on October 3rd, 2021 though the NRL is mulling moving the showpiece to New Zealand due to COVID thwack in Down Under) and it will be in place for the start of the 2022 footy season and well ahead of the 2023 FIFA Women’s World Cup™.

The 83,500-capacity Stadium Australia, formerly known as ANZ Stadium and Telstra Stadium, is a multipurpose stadium located in the Sydney Olympic Park in Sydney, Australia.

The New South Wales (NSW) Minister for Sport, The Honourable Natalie Ward, Member of the Legislative Council (MLC), said the project would create much-needed construction jobs in Western Sydney later this year – “I can’t wait to switch on the Great Southern Screen at Stadium Australia next year for the 2022 NRL season. This project will create much-needed construction jobs in Western Sydney and, when it goes live, an unmatched experience for NSW sporting fans.”

Added Ward, “The NSW Government is continuing to invest in Sydney’s mega-event venue and home of the 2023 FIFA Women’s World Cup™ to ensure it delivers the ultimate live experience for the people of NSW.”

‘Stadium Australia’ further stated that at 120m long and 10m high, the Great Southern Screen will stretch across the entire Athletic Centre end of Stadium Australia. It will be the equivalent of the length of the football field.

The Stadium Australia capacity will remain above 80,000 for the biggest sporting events like the NRL Grand Final, State of Origin, Bledisloe Cup, the 2023 FIFA Women’s World Cup™ Final and football internationals.

The Bledisloe Cup is a rugby union competition between the national teams of Australia and New Zealand that has been contested since the 1930s.

Venues NSW (owner, coordinator and promoter of a portfolio of publicly-owned sports and entertainment venues in New South Wales) which oversees the State’s major stadia including Stadium Australia, confirmed that Daktronics Australia had been selected to set up new video screens at Stadium Australia after a tender process.

Remarked Daktronics Australia Region Manager Blair Robertson, “Having spent more than 15 years servicing large sport venues globally and with over 50 sports installations throughout Australia and New Zealand, the sheer scale and impact of the Great Southern Screen installation at Stadium Australia will undoubtedly be the most exciting to date. The 1200sq/m high-definition video display will entertain and amaze fans . . . it will generate a live gameday experience that has never been experienced in Australia.”

Populous, a global architectural design firm specializing in creating environments and venues that draw communities and people together, has planned the integration of the new video display at Stadium Australia.

Populous Senior Principal Al Baxter said this was a great example of enhancing the event experience and adding flexibility for the event operators at the same time – “The positioning and functionality of this enormous high-definition screen will create a major impact on fans. Whether it’s watching the finals of the 2023 Women’s World Cup™, State of Origin, a Guns N’ Roses (rock band) concert or for something like the Royal Edinburgh Military Tattoo, every person in the stadium will be immersed in live feeds, replays, split-screen programing or social media chats.

Added Baxter, “Adding the Great Southern Screen seamlessly into the stands takes the view from a 200sq/m screen to a monumental 1200sq/m, creating opportunities for greater event branding, spectator engagement and potential revenue for the stadium hirers.”

In Australia, the biggest high-definition sports video screen currently in operation is at Eagle Farm Racecourse (43.89m x 10.97m) in Brisbane, so the Stadium Australia screen will be roughly three times bigger than the next largest video screen in the country.

It will be the longest high-definition straight-run stadium video display anywhere in the world.