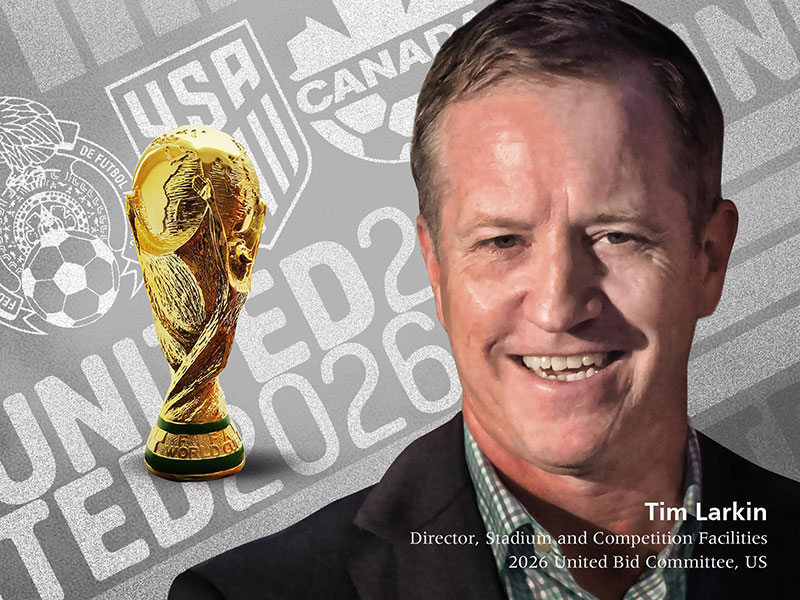 The joint UnitedBid 2026 by the US, Mexico and Canada was declared winner of the bid to host the 2026 World Cup on Wednesday, receiving 134 of the 203 votes to defeat the underdogs Morocco which polled 65 in the ballot at a FIFA Congress held in Moscow on the eve of this year’s World Cup.

The decision will see the flagship global football tournament return to North America for the first time since 1994 when the US hosted the mega event.

The UnitedBid leader Carlos Cordeiro said his team was “humbled by the trust our colleagues in the FIFA family have put in our bid”, adding the tournament had an opportunity to put football “on a new and sustainable path for generations to come.”

Tim Larkin of the UnitedBid 2026 was a speaker at the latest Coliseum Summit EUROPE in London (March 21-22, 2018) and Coliseum Summit US in Detroit, Michigan (May 9-10, 2018), and discussed in details about the preparation for the bid with a focus on the venues.

“The challenge for us was confirming in a very early stage that we will be able to host a World Cup in existing venues without major investments into stadium infrastructure. We had around 40 stadiums which were part of the initial process. We narrowed it down to 23,” Larkin, who is the Director of Stadium and Competition Facilities for the United Bid Committee, said in London.

“What we learned is flexibility and design are very important. If a stadium has the ability to operate on a daily basis for their permanent tenant without the flexibility of expanding spaces for internal media centers, hospitality areas – that’s the best way for the design going forward,” added the 25-year veteran of mega-event planning and operations.

Venue preparation and infrastructure is precisely what swung the FIFA vote decidedly in UnitedBid’s favor.
The 2026 World Cup will be the first to be expanded to 48 teams, posing an enormous logistical challenge for the hosts, one of the issues that is thought to have undermined the Moroccan bid and worked to the advantageof the North American bid.

Morocco, on the other hand, promised a ‘European’ World Cup in Africa, playing on its proximity to Europe and an appeal to take the tournament back to the African continent for just the second time, the report said.

But compared to North America, Morocco’s bid existed largely on paper – many stadiums and roads would have had to have been built and critics questioned how it would have coped with an expanded tournament, AFP said.

FIFA inspectors classified the north African nation’s stadiums, accommodation and transport as “high risk”, awarding it just 2.7 out of five in an evaluation report, with concerns raised over several critical aspects, it added.

Now that the three North American countries have won the hosting rights, the next crucial stage would be to decide on the host cities. The UnitedBid has included 23 candidate host cities across Canada, Mexico and the US as part of our offer to FIFA to provide maximum flexibility and leverage when making the best choice for where and how to stage the competition. Of these, FIFA will select the final list of 16 cities (and the stadiums) in 2020 or 2021.

Under the current plan, the US will host 60 matches, while Canada and Mexico will host 10 each. Details of the matches and cities will be worked out by FIFA in due course.

Of the potential host cities, Canada and Mexico have three each, while the US has put 17 cities in the race. These are:

Coliseum is a global series of stadium and arena business conferences and a sports venue news online-platform dedicated to the various challenges of designing (venue design), constructing and operating of sports venues all around the world. Continue to follow Coliseum for latest updates on stadium business.