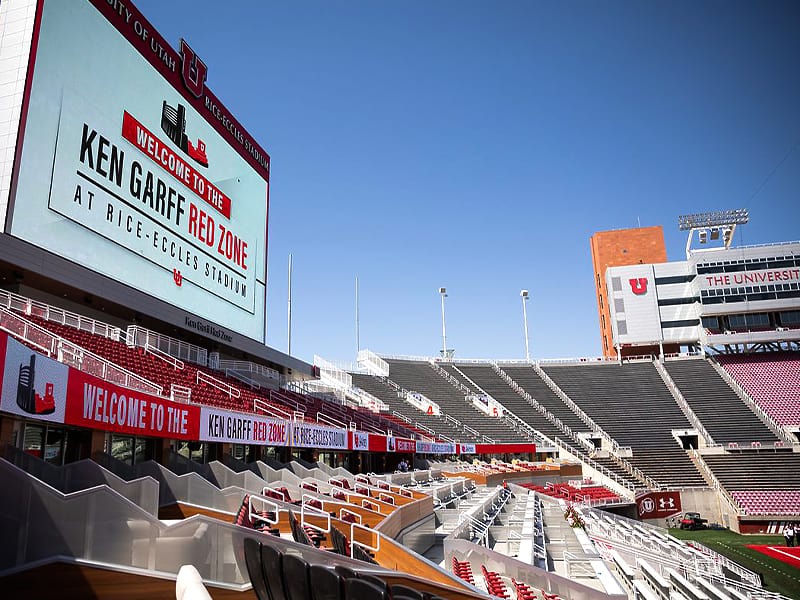 The University of Utah (US), along with the Ken Garff Family, officially cut the ribbon on the $80 million Ken Garff Red Zone at the Rice-Eccles Stadium on August 12th. Under a clear blue sky and bright sunshine, the event served as the official unveiling of the stadium expansion that encloses the South end of the Rice-Eccles Stadium, provides brand-new premium seating experiences, team locker room and gameday amenities, while increasing the seating capacity to 51,444.

The University of Utah is a public research university in Salt Lake City, Utah, US. It is the flagship institution of the Utah System of Higher Education.

The Rice-Eccles Stadium is an outdoor college football stadium in the Western United States, located on the campus of the University of Utah in Salt Lake City, Utah (US). It is the home field of the Utah Utes of the Pac-12 Conference.

The Pac-12 Conference is a collegiate athletic conference that operates in the Western United States, participating in 24 sports at the National Collegiate Athletic Association (NCAA) Division I level. Its football teams compete in the Football Bowl Subdivision (FBS), the highest level of college football in the nation.

Exulted Harlan, “Today is an historic day, not only for the Athletics Department and our student-athletes, but certainly for this university. This is an amazing project. It seems like a short two-and-a-half year ago when we went through the approval process, and now we are here. They say when you build it, they will come. But they have already been coming to the Rice-Eccles Stadium. We have been sold out for every game since 2010. This allows 4,500 more people to join the party.”

The ‘University of Utah’ further stated that a crowd of nearly 400 invited guests were seated on the field, facing the glistening new Ken Garff Red Zone at the Rice-Eccles Stadium.

Kathi Garff spoke on behalf of the Garff Family, and was joined on the stage by sons John and Matt.

The Garff family’s $21.5 million donation served as the lead gift for the project and stands as the largest single donation in Utah Athletics history.

Stated Dr. Good, “I want to share my congratulations and express my gratitude to Kathi and the entire Garff family for this incredible new facility. I know the Ken Garff Red Zone will advance our entire university.”

The expansion is a game-changing addition for the University of Utah, the Athletics Department and the Utah Football program to improve both the student-athlete and fan experience. The improvements include major enhancements to the gameday environment for fans as well as new locker rooms, sports medicine facilities and other football operations spaces that will also boost recruiting efforts.

Remarked Randall, “I want to thank Mark Harlan and his team, and the team at Layton Construction. They put up this place in a pandemic. Think about the supply-chain issues, the cost issues we’ve had and the need to preserve people’s health. Thank you to all of them. What you are staring at with this new facility is $41 million in donations. You’re staring at an additional $10 million in ticket sales. This will help our football program to thrive and it will become even more elite than it is now.”

The addition of both premium and non-premium seating includes suite, loge box, ledge, club and premium terrace seating, and an increased number of bench seats.

The Layton Field Club and Diglisic Lounge complement the premium spaces in the Ken Garff Red Zone at the Rice-Eccles Stadium.

An expert team of planners, designers and contractors including Populous, VCBO Architecture and Layton Construction are completing final touches on the project, which will host its first game when the Utah Utes take on Weber State Wildcats to open the 2021 football season on September 2nd.

Added Randall, “This is a place of community, a place where, when the Utes are up by 75, you’d still want to be there and you wouldn’t want to go home early. And this is that place. This is a true differentiator for our football program.”

« Previous News: Barça, Madrid fume over ‘yes’ to CVC deal
» Next News: A game for which fans gave their right arm!