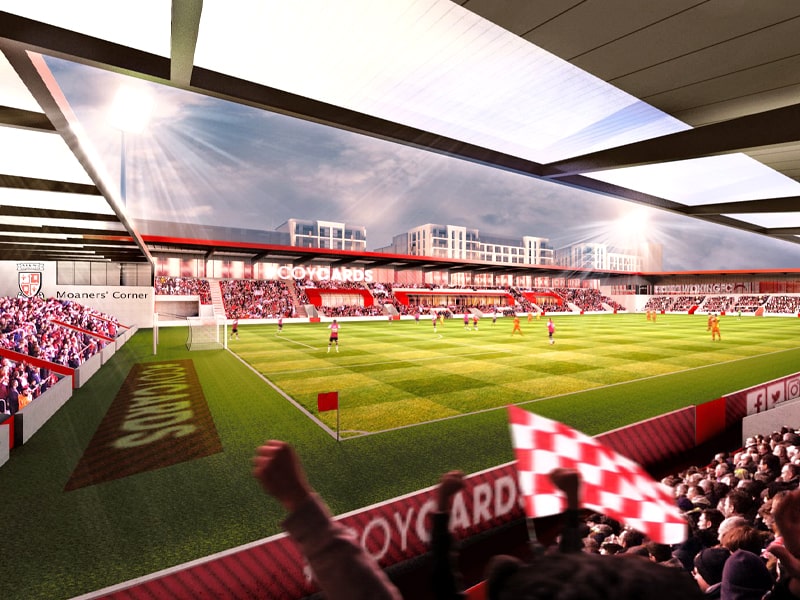 Woking Football Club – the semi-professional association football club based in Woking, England – seems finally to be going forward with their new stadium work. With funds in place and planning application filed, construction is likely to begin in May 2021.

The National League football club has submitted revised plans for its new stadium to the local council. UK’s leading operational delivery and project management consultancies for the sport and leisure sector – Rockvolt – will work as the stadium consultants representing Woking for the project.

The developer GolDev has been able to secure a loan of £250 million loan from the council for one of the city’s largest ever mixed-use projects. The project plan includes building 1,026 apartments (of which 191 will be reasonably priced) and a stadium amalgamated with a large medical center which will be able to accommodate 14,400 patients.

The new facility in Woking will be able to seat 9,026 spectators and will be in close proximity to the present home of Woking FC – Kingfield Stadium. Of course, it will be slightly moved and rotated. The new arena was initially planned as a 10,000-capacity one, but in the final planning application it was revised to nearly 1,000 fewer seats. Fans will be distributed across four independent stands, without sections in the corners.

The highlight of the venue will be its elevation above ground level, including the field, something which is rare in the UK. This way additional facility can be fitted below the football functions. In this case, a premium medical center and underground parking which will fit up to 850 cars, can be conceived.

If everything goes on course, construction which will start in 2021, and will take two years to complete. During the interregnum, Woking FC will have to play in a different ground.

Should all proceedings go as planned, the stadium might go under construction in May of 2021. From that point it would take 2 years to complete, during which Woking FC would have to play in a different ground. The developer GolDev has reportedly agreed to subsidize the club during this lean period in order to compensate for the lack of home ground.

Woking currently occupies the fourth spot in the National League – the division directly below the English Football League (EFL) – and their home ground is the 6,000-seat Kingfield Stadium. The vision for the new Woking Community Stadium points out that Kingfield Stadium is in “poor condition” and is becoming “increasingly costly to maintain”, necessitating the requirement of a new ground to enable the club to make great strides ahead.

The new venue would also enjoy standing terraces behind both goals and a low, enclosed roof to shelter fans during inclement weather conditions.

The club has opined that a smart stadium will prove to be a catalyst to enable the team to touch dizzying heights of success, and will also allow them to work for the development of the community.

The average annual deficit of Woking FC is £200,000 and its financial side showed little promise in 2018 due to a good FA Cup run, where the club came up against Premier League side Watford.

Earlier, in August, the South Action Woking group campaigning against the development labeled the previous plans a “monstrosity” and started a petition with several hundred signatures and attended council meetings.

Due to people’s protests over the development, it was decided that a medical center would come up along with the stadium.

John Walker is part of the group behind the project. He opined, “That means it has a massive capacity for the wider Woking community and takes strain off existing surgeries.”

He added, “The parking has also been revised and is all underground now, and has gone up from 500 to 850 spaces so it meets the council policy which it did not before.”

Though there is inconsistency when it comes to the number of flats being built and parking spots allotted, Walker argues that “statistically, not everyone will have a car”.

Club Director Ian Nicholson added, “My children and a lot of others I know are not even learning to drive and get cars in this area. My son did not pass his test until he was over 30.”

Keeping in mind the sustainability factor and to encourage residents to use greener modes of transport, all initial buyers will get a fold-up bicycle along with units to store them.

However, there has been murmur of dissent over the development. One such voice is that of Andy Caulfield who is part of the opposition group and lives close to the ground while his mother’s property directly borders the site.

He contends that plans have been tinkered with and while consultation supposedly took place no negotiations was held between the planners and the action group.

He explained, “They refused to respond to any of our requests for meetings despite promising the council they would do. This talk of engaging with the community is nonsense, they are engaging with people who support them selectively.”

Andy further explains, “If we were just football fans who did not live in the vicinity, we probably would not care about the residential blocks too much either. It ignores the impact on the immediate local community. It’s all PR spin frankly.”

The number of floors has been reduced in certain areas so that proportion of land covered by the 10-story blocks is lower, now attributing for merely 4 percent of the development.

Walker argues, “The 10-story elements are designed not to be on the edge of the street next to people’s homes, but in the center of the development next to the football ground.”

“It’s a modulation of different heights and they will drop down to three (on the roadside). The houses by our big stand are 10 meters away from six stories now, but that will be 75 meters afterwards,” he further points out.

Walker wraps up by saying, “There will be space for shops, events and functions so the ground’s facilities are used seven days a week rather than one Tuesday or Saturday night every few weeks.”