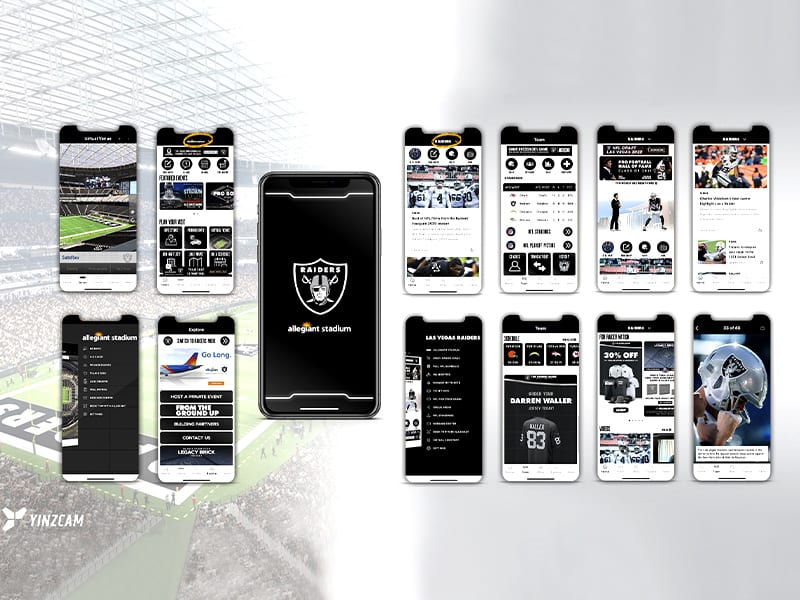 The American software company YinzCam has been working with the Raiders for several years, and are now again working with them on the new dual-mode team + stadium app – the mobile destination for all things Raiders and Allegiant Stadium.

The 65,000-capacity Allegiant Stadium is a domed stadium located in Paradise, Nevada, United States. It serves as the home stadium for the Las Vegas Raiders of the National Football League, and the University of Nevada, Las Vegas (UNLV) Rebels college football team.

A statement on the YinzCam website stated that David Griffin, Digital Product Director, Las Vegas Raiders, had the idea of showcasing both the team and the stadium within a single app, in a way that both Raiders fans (coming to home games) and live-event fans (Las Vegas locals and visitors who are interested in, say, concerts at the stadium) could quickly get access to the information they needed.

The YinzCam website further quoted Dave Griffin, Digital Product Director, Las Vegas Raiders, as stating, “Allegiant Stadium is a state-of-the-art venue located adjacent to the world-famous Las Vegas Strip. In 2017, we began to dream about what our app design and functionality would be like. We had an ambitious goal to showcase both the team and the stadium within a single app. Our working group was determined to continue best-in-class coverage of the Las Vegas Raiders while simultaneously adding innovative stadium utilities to enhance the app experience as a whole. YinzCam had no hesitation despite an aggressive and fast-paced timeline. The YinzCam content management system (CMS) allows us to customize and create the wide-ranging types of journeys that we plan to deliver. The new era for our app will feature premium experiences in Las Vegas and YinzCam will play an essential role in helping us stay on the cutting edge into the future. We are grateful to all involved.”

Each mode is architected to be self-contained, with its own navigation menu, its own content cards, its own More menus, and its own relevant links. Each mode has a one-tap button for the user to switch quickly to the other mode. In addition, on the home page, the title bar features a dropdown toggle to facilitate quick switching between modes. Some features, such as mobile ticketing, are available in both modes, to be used by Raiders fans and concert-goers alike. The striking black-and-silver branding of the team is featured in the most aesthetic manner in both modes of the app.

Two of the unique innovations that YinzCam had in the Raiders app including the loge-seat mobile remote control for fans to enjoy a premium digital experience for the TVs, as well as mobile ordering with a contactless grab-n-go option. Through a mobile-only Gameday to Go feature that the company built in collaboration with the Raiders, fans were able to place their take-out orders via the mobile app, and to pick up their food orders on gameday from a kerbside mobile kitchen at the spiffy stadium. This was a first for YinzCam – while the company has worked with other teams on mobile food ordering, the Raiders’ unique twist on this feature allowed fans to feel the excitement of gameday, by bringing the taste of Allegiant Stadium gameday into their homes.

For ease of fans

The team mode has a number of features for Raider Nation (fans of Las Vegas Raiders), including:

The stadium mode has a number of features for stadium visitors, including: