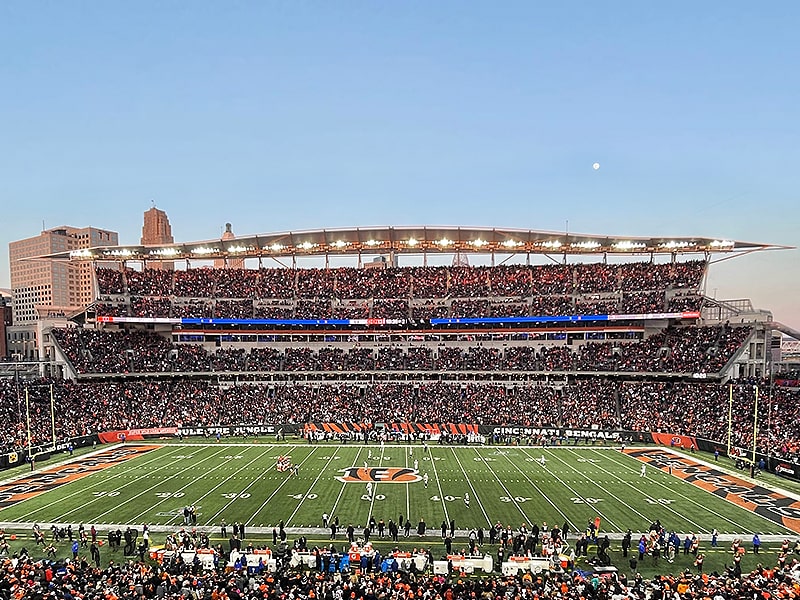 The National Football League (NFL) team Cincinnati Bengals and the regional telecommunication service provider altafiber (US) recently announced a partnership that will deliver a state-of-the-art, fiber-enabled Wi-Fi network at the Paul Brown Stadium.

The ‘Cincinnati Bengals’ stated that altafiber and its IT Services subsidiary, CBTS, will engineer and build the Wi-Fi network that will more than double the number of access points at the Paul Brown Stadium.

The Cincinnati Bengals are a professional American football team based in Cincinnati, Ohio (US). The Bengals compete in the National Football League (NFL) as a member club of the league’s American Football Conference North division. The club’s home games are held in downtown Cincinnati at the Paul Brown Stadium.

The 65,535-capacity Paul Brown Stadium is an outdoor football stadium in Cincinnati, Ohio. It is the home venue of the Cincinnati Bengals of the National Football League (NFL) and opened on August 19th, 2000.

Cincinnati Bell, doing business as ‘altafiber’, is a regional telecommunications service provider based in Cincinnati, Ohio, United States. The company delivers integrated communications solutions to residential and business customers over its fiber-optic network including high-speed Internet, video, voice, and data.

Put in Elizabeth Blackburn, Bengals Director of Strategy and Engagement, “First, we want to thank Hamilton County for supporting this project and sharing our passion for providing fans a best-in-class experience at the Paul Brown Stadium. In today’s world, fans demand first-class amenities and part of that is continuous Wi-Fi connectivity so that they can engage with family and friends, post on social media and check the latest news, scores and stats. We’re excited to provide this state-of-the-art technology as we continue to enhance the gameday experience.”

The ‘Cincinnati Bengals’ further stated that the Wi-Fi 6 network will greatly enhance the ability to provide fast Internet service to devices connected to the 1,600 access points strategically located throughout the stadium. Wi-Fi 6 uses MU-MIMO technology, which allows for eight times the number of concurrent connections when compared to previous generations of Wi-Fi, and also produces greater throughput and higher speeds. To support the new access points, the Paul Brown Stadium is deploying a 40GbE network core that will deliver the fastest Internet speeds possible for fans.

Said Steve Johnson, Paul Brown Stadium Manager of Capital Projects, “Wi-Fi 6 is ideal for Paul Brown Stadium because it improves network capacity to allow more fans access at the same time at faster speeds. With altafiber’s support, we designed an enhanced network with the fan in mind to ensure that everyone in the stadium has access to high-quality, fast and reliable Internet using the latest Wi-Fi technology.”

altafiber has a long history and progressive experience in providing and managing large and complex Wi-Fi deployments that deliver connectivity, industry-leading analytics and marketing tools. The company provides Wi-Fi to multiple high-traffic venues across the region.

As a part of the overall partnership, altafiber and the Bengals are entering a sponsorship agreement that includes gate signage at the Northwest entrance at the Paul Brown Stadium, signage inside the stadium and sponsorship of Bengals-related radio, television and digital content.

Exulted Brian Sells, Bengals Vice-President and Chief Marketing Officer, “We’re excited to partner with altafiber as they become the official Wi-Fi Provider of the Cincinnati Bengals. This is a great opportunity to strengthen our connection with an important company in our community.”

Commented Christi Cornette, Chief Culture Officer of altafiber, “altafiber shares the Cincinnati Bengals’ commitment to providing an outstanding experience to the customers and communities that we serve. We are proud to be the official Wi-Fi Provider of the Cincinnati Bengals and Paul Brown Stadium, and we look forward to serving the team and its fans well into the future.”