‘America’s Game’ in five US Cities 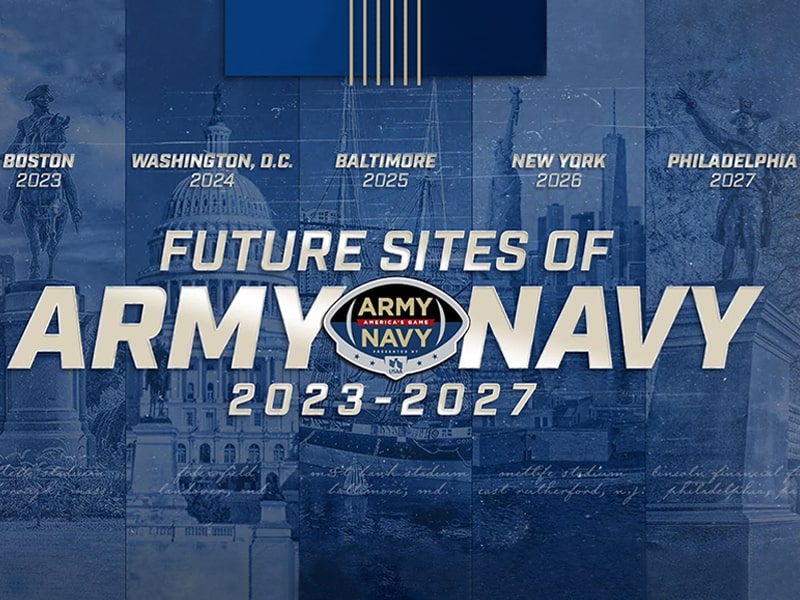 Said Gladchuk, “Extraordinary efforts put forth throughout the bidding process made evaluations and final City selections highly competitive. Proposals brought forward included local, City and State dignitaries to ensure the most comprehensive presentation could be made to the selection committee. The promotional partnership we share with the USAA clearly reinforced the enthusiastic interest in hosting the Army-Navy game by many of our nation’s greatest Cities. Our destinations over the next five years provide the Academies with an opportunity to share the economic impact, history and tradition of Army-Navy with a number of communities in diverse geographic areas.”

Added Gladchuk, “We are certain that each location will present a uniquely accommodating experience for our fans and will make for an incredibly memorable event for our midshipmen and cadets. Our gratitude goes out to all the Cities that showed interest and congratulations to the recipients of the games.”

Stated Buddie, “We are excited to announce the next five-year cycle for America’s Game. The Army-Navy game is a great showcase for both service academies. We are looking forward to the pageantry and tradition to be on display for the fans in these Cities while providing an opportunity to support the Cadets and Midshipmen. We had great interest from many regions and thank the Cities who participated in the bid selection process. We cannot wait to have this game played at some incredible venues in great Cities.”

The ‘USS Constitution’, also known as the Old Ironsides, is a three-masted wooden-hulled heavy frigate of the United States Navy. She is the world’s oldest ship still afloat. She was launched in 1797, one of six original frigates authorized for construction by the Naval Act of 1794 and the third constructed.

The Boston Tea Party was an American political and mercantile protest by the Sons of Liberty in Boston, Massachusetts, on December 16th, 1773.

The ‘Navy’ further stated that the nation’s capital will be the backdrop for the 2024 game, which will also be the 125th playing of the Army-Navy game. This will be just the second time the game has been played in the D.C. region and the first since 2011, a game in which Navy won 27-21. The Army will serve as the home team.

The game will return to Baltimore in 2025 with Fort McHenry, the site where the American lawyer, author and amateur poet Francis Scott Key penned the lyrics to the national anthem, serving as the backdrop. It will be the seventh time Baltimore has hosted the game and the first time since 2016. The two teams are 3-3 in games played in Baltimore. The Navy will serve as the home team.

New York/New Jersey will host the 2026 game as part of the 25th anniversary of 9/11. It will be the 19th time the game has been played in New York or New Jersey and the sixth time it has been played at the Meadowlands Complex. The Navy is 4-1 against Army in games played in East Rutherford, including a 17-13 win last December. The Army will serve as the home team.

Philadelphia will host the annual Army-Navy game for the 91st time in 2027. The ‘City of Brotherly Love’ is also the host for this year’s game at the 67,594-capacity Lincoln Financial Field on December 10th. The Navy leads the all-time series 45-40-4 in games played in Philadelphia. The Navy will be the home team for the 2027 game.

The 123rd playing of the Army-Navy game will take place on December 10th at 3 pm in Philadelphia at the Lincoln Financial Field. The Navy leads the all-time series 62-53-7 and has won two of the last three, 16 of the last 20 and 18 of the last 23 contests.