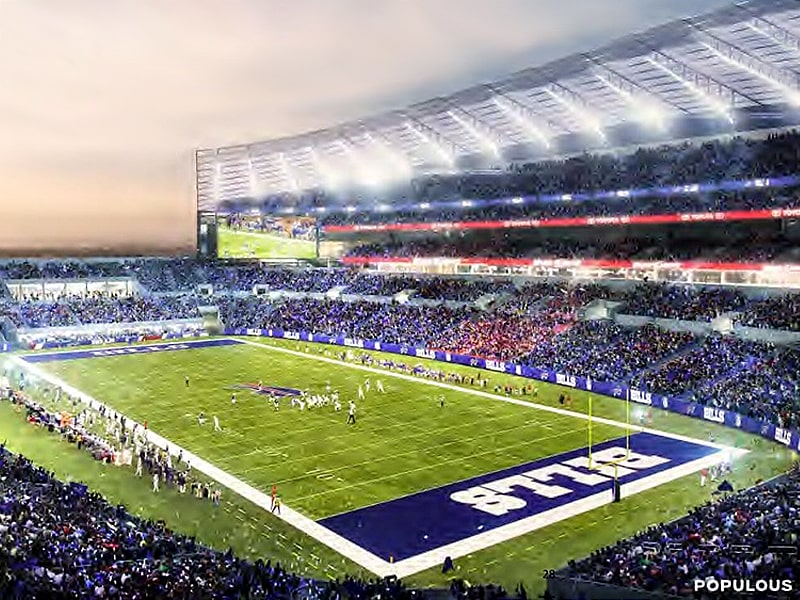 The deal for a new stadium for the National Football League (NFL) team Buffalo Bills (US) cleared a hurdle recently with the Erie County Legislature unanimously approving a memorandum of understanding (MOU), but legislators cautioned higher hurdles lie ahead before a final agreement is reached.

‘The Buffalo News’ quoted Minority Leader Joseph Lorigo, C-West Seneca, as stating, “As we all know, this is only the first step in the whole process. Coming up, there will be negotiations on the project labor agreement, negotiations on the community benefits agreement and negotiations on a number of different things before the final deal is struck.”

The Buffalo Bills are a professional American football team based in the Buffalo metropolitan area (US). They compete in the National Football League (NFL) as a member club of the league’s American Football Conference East division. The team plays its home games at the Highmark Stadium in Orchard Park, New York, US.

The 71,608-capacity Highmark Stadium is a stadium in Orchard Park, New York, in the Southern portion of the Buffalo metropolitan area (US). The stadium opened in 1973 and is the home venue of the Buffalo Bills of the National Football League (NFL).

In March, the Buffalo Bills had reached an agreement with the State of New York and Erie County in New York (US) on a 30-year lease for a new $1.4 billion stadium in Orchard Park (town in Erie County).

‘The Buffalo News’ further stated that the memorandum of understanding provides the framework for the new stadium deal.

The County Legislature’s approval of it means the Bills now have formal approval to move forward with stadium architectural design and engineering work. The Pegula Sports and Entertainment has already begun that work with the expectation the Legislature would approve the document.

The informative summary document outlines the broad terms of a stadium deal, but it is legally nonbinding. Over the coming months, the Legislature must still review and vote on other agreements.

Though the Legislature is often divided on party lines when it comes to big legislative priorities, legislators have exhibited a greater bipartisanship in their commitment to examining specific elements of the stadium deal before casting their votes, even as they praise Erie County Executive Mark Poloncarz’s administration for its work.

All legislators had previously expressed general support for the framework of the $1.4 billion stadium deal. The deal would require a $250 million county contribution, but there is no property tax increase anticipated as a result. The State is responsible for putting up $600 million toward the deal.

Of the $250 million, at least $100 million of the county’s construction costs would be paid in cash from the county’s 2021 budget surplus. The remainder would be borrowed.

However, the Legislature remains under pressure to ensure that the team commits to a substantive community benefits agreement that would funnel money to the community. Issues of transportation access to the stadium, job opportunities, and youth development are among the many priorities community organizations have lobbied to have included in a final agreement.

Community organizations have lobbied the Legislature to refuse to approve any stadium deal documents until strong community benefit terms are negotiated.

But Legislature Chairwoman April Baskin, D-Buffalo, said it was unnecessary to hold up the memorandum of understanding – “There are people in the community who believe that approving this without establishing the community benefits agreement, which we have referred to as the CBA, means that the Legislature is not going to fight for a strong CBA, and that could not be further from the truth. I, and I know several of my colleagues, are committed to securing a strong agreement that benefits every community in Erie County.”

The other stadium documents the Legislature must vote on before the Bills deal is done include:

These additional votes still give the Legislature some leverage. The Bills, Erie County and the State are expected to have most documents for the stadium deal signed and approved by September 1st, though that deadline could be extended if negotiations are unfinished.

The Legislature’s resistance to letting stadium matters move along without scrutiny was evidenced in the above mentioned vote taken leading to the county to hire a consultant to oversee the environmental impact study for the new stadium. Some legislators balked at the county seeking to award the contract to Phillips Lytle, a local law firm that was also a high bidder.

Four Democratic and Republican-supported legislators sought to award the contract to Fisher Associates, a Rochester-based environmental engineering firm that submitted a bid for less than half the cost of Phillips Lytle’s $266,000 proposal. But other Democratic and Republican legislators rejected the other lawmakers’ proposal. All 11 legislators ultimately supported the administration’s request that Phillips Lytle be awarded the work.