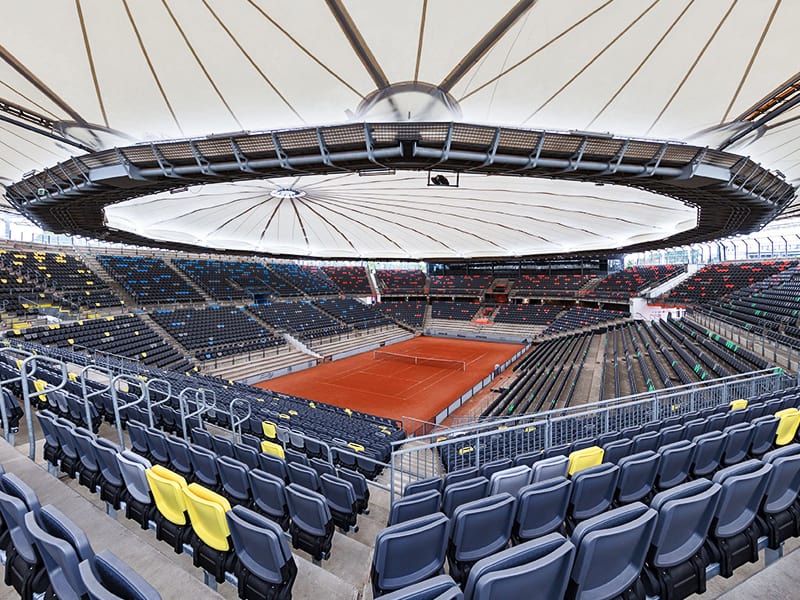 Repurposing work worth €10m carried out at the Rothenbaum Tennis Stadium in Hamburg (Germany) has been completed. It was an 18-month redevelopment project.

The rehabilitated facility will celebrate its premiere on September 19th when the 114th Hamburg European Open will be staged from September 19th to 27th. It was originally scheduled to be held from July 11th to 19th, but was canceled by the Association of Tennis Professionals (ATP) as COVID-19 struck the world with a vengeance.

The rescheduled tennis matchup will take place keeping in consonance with the COVID-19 guidelines and strict health protection and safety measures in place.

Am Rothenbaum is the site of the main tennis court of the German Open Tennis Championships, played in the Harvestehude quarter of Hamburg, Germany.

The home of the annual Hamburg European Open has seen its capacity rise to 10,000 with all existing seats replaced, and new color schemes amalgamated throughout. The spaces earmarked for wheelchair users have been increased up to 30 and those for visually impaired people up to 100.

The Hamburg European Open (earlier German Open Tennis Championships) is an annual tennis tournament for male professional players held in Hamburg, Germany, and is part of the ATP Tour.

Rothenbaum, which first opened its doors in 1892, has also undergone a complete renewal of its roof membrane, with the engine technology of the retractable roof redecorated. The arena’s entrance area has been redesigned, while facades have been given a futuristic touch.

The players’ areas at the ATP World Tour 500 clay court venue have been extensively refurbished and made avant-garde, with changes made to the locker rooms, showers and players’ lounge ahead of this year’s tournament, which will be held in the latter half of September.

The tournament’s previous Hall of Fame has been upgraded, with a new, digital ‘Walk of Champions’ coming up in lieu of it. Visitors can use QR codes to find out more about previous tournament winners such as tennis giants Roger Federer and Rafael Nadal and the tournament’s long history.

As part of the redecoration work, the facades were given a new and contemporary coat of paint, and the old sun protection of the window systems was replaced.

Exulted Alexander Otto, the business tycoon who injected major funds through the Alexander Otto Sports Foundation, “I am delighted with the result. The stadium has been completely renovated and with its now international, modern look, a successful repositioning of the Rothenbaum brand takes place. It is great to see what we have created here as partners. Players and visitors are invited to come and stay at the Hamburg European Open, which is the perfect framework to celebrate the stadium’s inauguration.”

The project, which was managed by Otto’s company ECE, received €8m of funding from the Alexander Otto Sports Foundation. The City of Hamburg opened up its purse to the tune of €1m for the renovation of the roof. The German Tennis Federation with its subsidiary DTB Stadion and Marketing, as well as local tennis and field hockey club, Club an der Alster, provided the remaining amount for the project.

Andy Grote, Sports Senator for the Free and Hanseatic City of Hamburg, explained, “The heart of German tennis beats at Hamburg’s Rothenbaum. The international competitive sport is starting again in the Active City! I’m particularly looking forward to the upcoming premiere at the only German ATP tournament in Hamburg, when we can present the stadium to a larger number of Hamburgers.”