A spectacular structure that lodges a giant indoor snow center, and boasts a water park on its roof, has opened in the Chinese province of Hunan.

Named the ‘Xiangjiang Joy City Snow World’, it was under construction in a former quarry for six years and the project has been rated as amongst the nine most difficult underway in the world in the past decade.

The China Construction Fifth Engineering Division Corp (CCFED) took on the mantle of the project.

The construction workers have worked in challenging conditions which involved suspending exceptionally heavy steel and concrete structures off the edge of the quarry rim. The quarry is reported to be over 300 meters long, 200 meters wide and 100 meters deep.

Construction teams have had to work with a steep rock face, and in rough terrain like complex geological features such as lava flow and build an extremely heavy steel structure within the deep pit, weighing an estimated overall weight of 200,000 tonnes. This was suspended in the middle of the pit by using 48 pillars, each with a diameter of 4.3 meters (over 14 feet) to support the weight.

Media reports stated that ‘Xiangjiang Joy City Snow World’ has a 30,000 square meter indoor snow park – placing it joint sixth in the world in terms of size of more than 110 indoor snow centers that are now open on six continents.

Media reports further stated that China now runs four of the seven largest indoor snow centers, including the world’s three largest. All four have opened in the past three years and three in the last 12 months. The third largest, Chengdu Sunac Snow World, went on stream in June this year.

Austrian design practice Coop Himmelb(l)au has lent its expertise in designing the 150,000-square-meter resort. In 2014, CTC Ice & Snow, a Canadian company who have been operating in China for 20 years, designed the indoor snow park. The Canadian company informed that the concept of the whole development has been inspired by the Alps, with a snow playground designed to ensure a whole recreational experience in a multipurpose facility that hosts activities like skiing, skating, snow sliding and ultimate challenge. 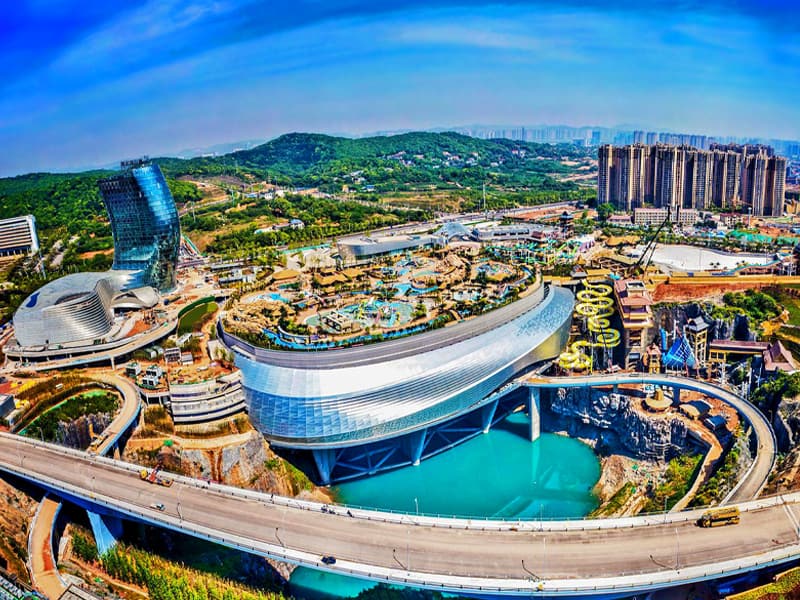 The ski hall was built within the quarry, 36 meters below ground level. The ski area covers 5,672 sqm. Lodged within the ski area are a 1,200 sqm ice lake and a large snow play area with 13 slides. Uplift includes an indoor gondola.

The ski run, leaning against the slope of the mountain, which is 130m long and 60m wide with an average 13 degree pitch lies at the heart of the resort. The various other attractions include an indoor mountain covered in snow, a penguin zone and a winter village. Plenty of snow activities will be on offer including a snow maze, snow castle, snow sliding and penguin performance. Maximum capacity is 2000 people. It is still not known whether a 100m high tower and 65m waterfall are also the features of the completed project.

The ‘Xiangjiang Joy City Snow World’ has come up at a price tag of around 12 billion yuan ($1.7 billion), although 75 percent of this cost was apparently used to pay fees for house demolition and resettling the residents. More than 8,000 direct job positions is expected to be generated and 50,000 indirect jobs generating an annual income of about 3 billion yuan. The complex was originally scheduled to open in 2016, then 2019 before it finally opened its gates in summer 2020.