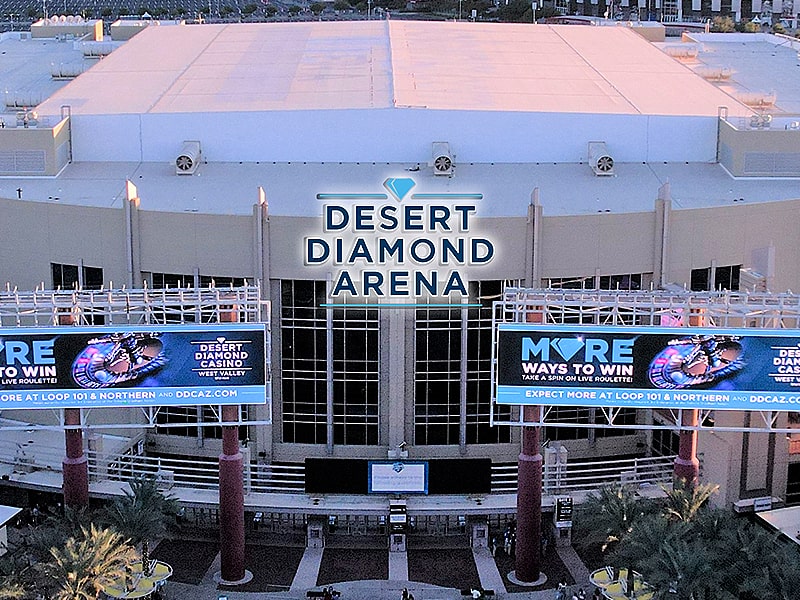 On August 23rd, Desert Diamond Casinos and Entertainment and the world’s leading producer of entertainment experiences – ASM Global – announced plans for a major new partnership that will rename the City of Glendale’s (Arizona, US) 18,000-seat facility to Desert Diamond Arena. The agreement signals the dawn of a new level of entertainment offerings for years to come.

The Gila River Arena will now be known as the Desert Diamond Arena. The name change stems from a new partnership between Desert Diamond Casinos and Entertainment and ASM Global. The entities say they are planning upgrades for the 18,000-seat facility.

‘ASM Global’ stated that located less than one mile apart in Glendale’s vibrant sports and entertainment district, the partnership will integrate new opportunities and synergies between ASM Global, Desert Diamond Casinos and a world-class arena.

Desert Diamond Casinos and Entertainment, with three locations in Southern Arizona (US) (Tucson, Sahuarita and Why) and one in the West Valley in Glendale, Arizona, is owned and operated by the Tohono O’odham Gaming Enterprise, an enterprise of the Tohono O’odham Nation.

The Tohono Oʼodham are a Native American people of the Sonoran Desert, residing primarily in the US State of Arizona and the Northern Mexican State of Sonora. The federally recognized tribe is known in the United States as the Tohono Oʼodham Nation.

With a population of over 250,000, Glendale in Arizona, US, is a premier destination to live, work and play. Glendale features premium entertainment and shopping opportunities and a growing list of signature companies who all call the City home. The City is also home to the 63,400-capacity State Farm Stadium and the 18,300-capacity Desert Diamond Arena in Glendale’s Sports and Entertainment District, host of the National Football League (NFL) team Arizona Cardinals and major concerts as well as mega events such as the 2023 Super Bowl LVII (the upcoming championship game of the National Football League for the 2022 NFL season) and the 2024 National College Athletic Association (NCAA) Final Four.

‘ASM Global’ further stated that new headline events, interconnected promotions, special offers, and other amenities will all be part of an unparalleled entertainment mecca in one of the fastest-growing regions in Arizona.

This is only the beginning as planned major upgrades to the arena and future hotel and resort expansions to the Desert Diamond Casinos will ensure additional future opportunities. The announced agreement will be in place for at least a decade beginning this Fall and brings together partners that share in the commitment to supporting the community by bringing expanded entertainment and economic opportunities.

Additional headline acts have already been secured for 2023, including Rage Against the Machine (American rock band) and Carrie Underwood (American singer).

Said Mike Bean, head honcho of the Tohono O’odham Gaming Enterprise, “Desert Diamond Casinos has always been committed to building a successful West Valley community with diverse entertainment options. It just made sense to connect our capabilities with our neighbors at ASM Global and the City of Glendale so that we can deliver the best possible experience for all of our guests. We appreciate the vision of Glendale leaders in establishing a thriving sports and entertainment district where all of us can succeed together.”

Stated Jason Oberlander, Chief Commercial Officer for ASM Global, “This is about much more than changing the name of the arena. Strengthening our relationship with Desert Diamond Casinos through this new agreement will allow us to go further than ever before in delivering the highest level of entertainment experiences to our guests. With the City of Glendale, this partnership is more than the sum of its parts, and we are excited to move forward with this new opportunity.”

Added Glendale Mayor Jerry P. Weiers, “The exciting news about the naming rights agreement is a big win for Glendale and the West Valley. The Desert Diamond Casinos are leaders in entertainment, job creation and driving increased business for retail, hotels and restaurants. It is a perfect fit for their brand to be extended to our Arena. We are proud of the strong partnership between the Tohono O’odham Nation and our community.”