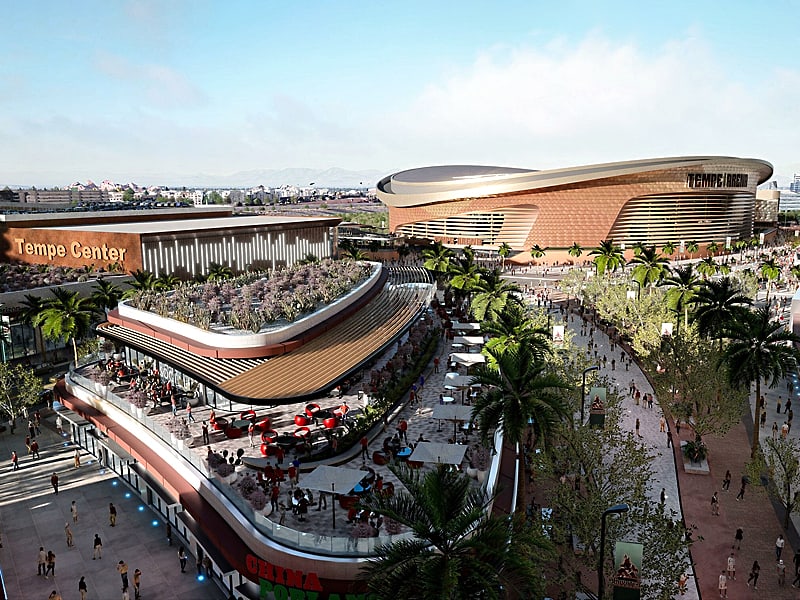 With the National Hockey League (NHL) Commissioner Gary Bettman in attendance, the Tempe City Council in a 7-0 vote recently approved the necessary items for the NHL team Arizona Coyotes’ (US) proposed arena and entertainment district to move to a public vote on May 16th, 2023.

‘Arizona Sports’ stated that three things had to get the OK before the vote: A development and disposition agreement (DDA), a general plan amendment and a zoning amendment.

The Arizona Coyotes are a professional ice hockey team based in the Phoenix Metropolitan Area in Arizona, US. The Coyotes compete in the National Hockey League (NHL) as a member of the Central Division in the Western Conference and currently play at the Mullett Arena in Tempe, Arizona, US.

‘Arizona Sports’ stated that if any of those items did not pass, then there wouldn’t be a need for a public vote in May 2023.

Bettman said he believes in the plan Coyotes owner Alex Meruelo has put forward and expressed confidence that the franchise will succeed in building a permanent home in Tempe, Arizona, US.

Commissioner Bettman told newsmen, “He has our support and as you know, if you go over the last 25 years I guess it is, our commitment to Arizona has never wavered. Hopefully, we can get to a place where a new arena here will be a reality. We are very respectful of the process, supportive of the process and we’re here to be supportive of Alex, the team and the City. We know this is a great market with great plans and this is a place we want to be.”

The May referendum vote by the people of Tempe could ultimately decide the fate of the arena and entertainment district at Priest Drive and Rio Salado Parkway, which will cost around $2.1 billion.

It will include a 16,000-plus seat arena, a Coyotes practice facility, a restaurant and retail center, a theater, and two hotels.

Xavier Gutierrez, Arizona Coyotes President and head honcho said in a statement, “The Tempe Entertainment District (a mixed-use project incorporating a professional sports franchise and entertainment district) will be a huge win for this community, and we have no doubt that the Tempe voters will agree. Our project will turn a landfill into a landmark – and one that not only provides a wonderful home for the Coyotes but also serves as a vibrant town square for Tempe, generating thousands of sustainable jobs and millions of dollars in tax revenue for the City. We look forward to sharing more information over the coming months. But, for now, we are grateful and excited.”

The Coyotes said they will fund the project with $1.9 billion in private funds, which includes a plan to find the necessary money “without raising taxes or using current City revenues by issuing public infrastructure bonds sold to private investors”, according to the project proposal’s website.

More than $200 million in bonds will pay for a portion of the project involving public infrastructure. Much of that has to do with the remediation of the land, which is formerly a landfill. They plan to be repaid with revenues generated by the project when it’s complete.

The developer is proposed to contribute another $200 million-plus in debt service to the project.

Bettman said when asked about the Coyotes’ requested tax breaks once the project is finished, “Frequently when you create an economic engine and you’re making a substantial investment, you’re creating revenues and taxes that wouldn’t otherwise exist,” and he termed it a “win-win”.

The Commissioner also confirmed that the Coyotes are expected to sign a non-relocation agreement of 30 years.

The NHL club owned by Meruelo projects the entertainment district could create close to 7,000 jobs in Tempe and generate $215 million for the City alone over 30 years, among other benefits.

There has been pushback, however, because of the Coyotes’ history that led to an exit from its old Glendale arena and beyond.

The City of Phoenix and Sky Harbor Airport have strongly pushed back against the proposed arena – the parties even sent citizens of Tempe, Scottsdale and Phoenix mailers pushing against the proposal. The land sits underneath a flight path, and the entertainment district’s plans include nearly 2,000 multifamily homes that the Federal Aviation Administration has strongly labeled as “incompatible” due to airplane noise.

There is potential for litigation in those regards, as the Cities of Tempe and Phoenix have an IntraGovernmental Agreement dating to 1994 about noise contours that were set up to help Sky Harbor grow as an airport.

There is also a safety issue with the flight path over the Salt River so close to the development that will be on the riverfront.

Both Sky Harbor and the City of Phoenix have warned that an arena would lead to flight path changes for landings and departures, which in turn would slow air traffic while creating new noise and safety problems.

The Coyotes ended their 19-year run at the formerly named Gila River Arena in Glendale after the 2021-2022 seasons and moved into a temporary home at the Arizona State University’s new Mullett Arena.