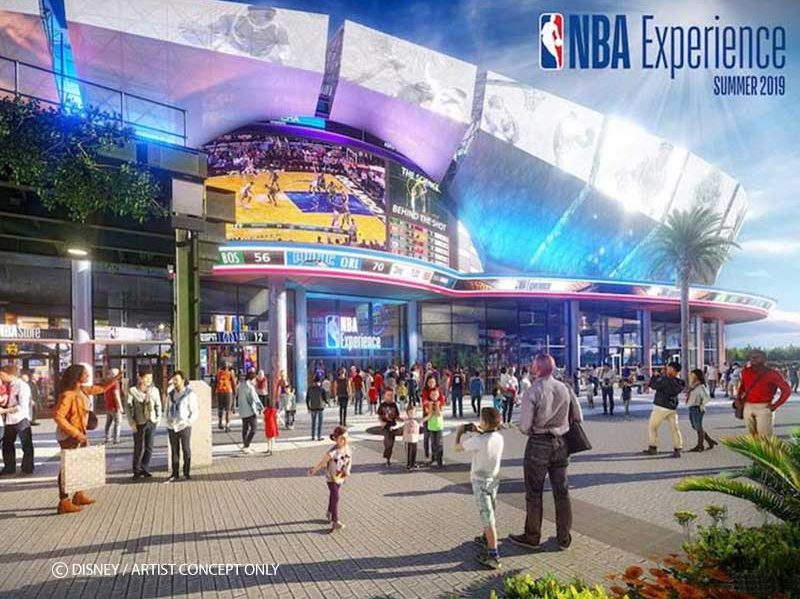 “We are inspired by the design of the new building and the energy that it will bring to the West Side of Disney Springs,” said Senior Vice President of Disney Springs and ESPN Wide World of Sports Complex Maribeth Bisienere.
Inside the NBA Experience will be a restaurant, interactive games, immersive fan experiences, and a retail store. It will also incorporate the architecture of new NBA arenas around the league.

Sal LaRocca, who is the NBA president for Global Partnerships, calls it a “one-of-a-kind experience is sure to be enjoyed by basketball and Disney fans of all ages.”

It’s hard to tell from the concept art, but the building looks like it might expand upon the existing footprint of DisneyQuest into the walkway between it and the Cirque du Soliel building. That looks to be where the new restaurant will be.

Since the beginning of the 2010 NBA season, the Orlando Magic, Brooklyn Nets, Sacramento Kings and Detroit Pistons have opened new arenas. Six more teams began playing in new facilities during the 2000s.

The NBA Experience at Disney Springs will include interactive games, a retail store, restaurant and more. It’s expected to open in the summer of 2019.

More details on the project will be revealed at the Coliseum Summit US, May 9-10, 2018, in Detroit, Michigan.