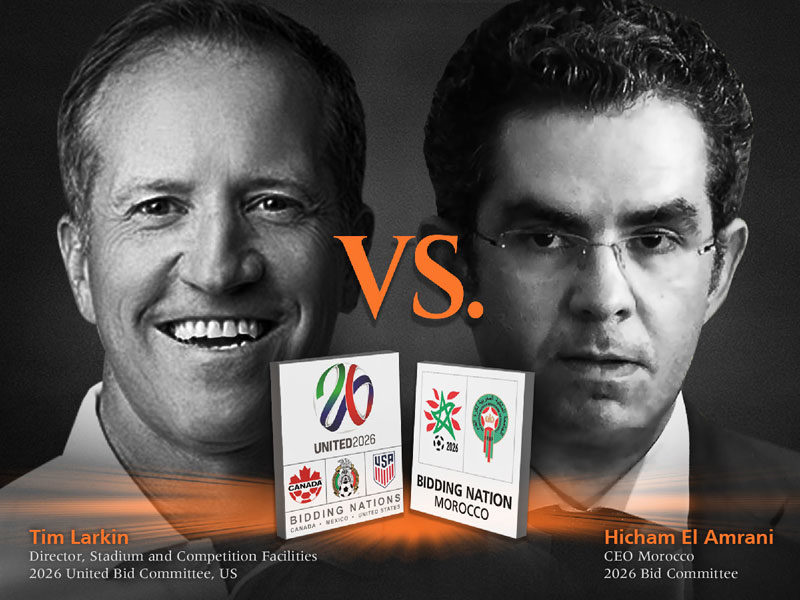 The FIFA Congress will announce the host for the 2026 FIFA World Cup™ on June 13, just a day before this year’s tournament kicks off in Russia.

FIFA will have to choose from the two final bids – a joint bid by the US, Canada and Mexico and another by Morocco – for the 2026 edition of its flagship tournament, which will be the biggest yet, following a unanimous decision by the FIFA Council in January 2017 to expand the tournament to 48 teams from the current 32.

The Moroccan bid was cleared to advance to a runoff vote against the UnitedBid 2026 from North America on June 1 despite a FIFA evaluation report which classified the African bid’s stadia, accommodation and transport as “high risk.”

A long-awaited report from FIFA inspectors left the US-Canada-Mexico’s UnitedBid 2026 as the clear front-runner after giving it a rating of four out of a possible five according to its criteria.

Tim Larkin of the UnitedBid 2026 was a speaker at the latest Coliseum Summit EUROPE in London (March 21-22, 2018) and Coliseum Summit US in Detroit, Michigan (May 9-10, 2018), and discussed in details about the preparation for the bid with a focus on the venues.

“The challenge for us was confirming in a very early stage that we will be able to host a World Cup in existing venues without major investments into stadium infrastructure. We had around 40 stadiums which were part of the initial process. We narrowed it down to 23,” Larkin, who is the Director of Stadium and Competition Facilities for the United Bid Committee, said in London.

“What we learned is flexibility and design are very important. If a stadium has the ability to operate on a daily basis for their permanent tenant without the flexibility of expanding spaces for internal media centers, hospitality areas – that’s the best way for the design going forward,” added the 25-year veteran of mega-event planning and operations.

Venue preparation and infrastructure is precisely where the United Bid appears to be decidedly ahead of the Moroccan bid.

Morocco received only 2.7 out of five, but advanced to the June 13 vote in Moscow despite red flags being raised over several critical components of the bid. A FIFA summary of the bid task force’s findings warned that “the amount of new infrastructure required for the Morocco 2026 bid to become reality cannot be overstated.”

“The Bid Evaluation Task Force considers it its duty to emphasise the significant overall risk, on a compounded basis, of a bid that has so many facilities (from stadiums and training sites to major transport infrastructure and accommodation projects) that would need to be built or completely renovated,” the summary stated.

In 17 of 20 categories rated by FIFA in the report, the UnitedBid was rated as “low risk”. Morocco was deemed low risk in seven categories, with others classified as medium or high risk.

The US-Canada-Mexico bid had long been seen as the overwhelming favorite but has faced increasingly stiff competition from Morocco in recent months.

While the North American bid showcases an array of gleaming, large capacity stadia and an established transport and tourism infrastructure, Morocco’s bid relies heavily on the country’s passion for football, it’s relatively compact size and its proximity to Europe.

Out of a total of 211 FIFA member nations, the four in competition do not have a vote. Morocco has asked FIFA to bar states with US ties, such as Guam and the British Virgin Islands, from voting.

Meanwhile, former England captain David Beckham has expressed his support for the United Bid ahead of the June 13 vote.

“A football competition as big as the World Cup deserves to be in great places and if the US, Canada and Mexico get that it will be very special,” Beckham said in a video released by Major League Soccer.

The star footballer who was awarded an MLS franchise in Miami earlier this year said he had experienced the passion for the game in all three countries.

“I’ve been able to have played in one of these countries and I’ve been to the other two as well and also played in Canada for the LA Galaxy but I know the passion that runs through all three of those countries,” he said.

To know more about the bids, keep following Coliseum Summit, a global series of stadium and arena business conferences.